Frida Kahlo Is a Now a Barbie Doll 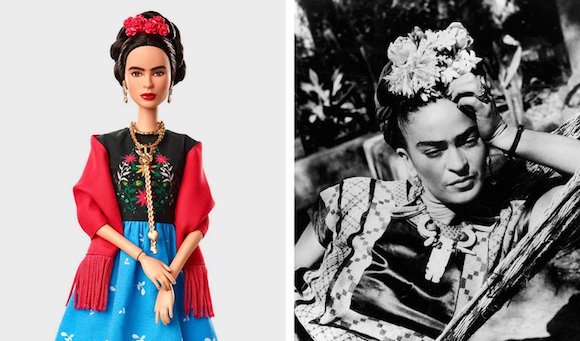 image via the New York Times

Yesterday the New York Times reported that the toy company Mattel has released a Barbie-Doll version of Mexican artist Frida Kahlo in conjunction with International Women’s Day. Mattel is the maker of Barbie.

Via the Times: “She is part of the line of Inspiring Women dolls that includes the aviator Amelia Earhart and the NASA mathematician Katherine Johnson, whose life was featured in the movie Hidden Figures.”

Summer of 2017 saw some Kahlo-fandom resurgence with the celebration of what would have been her 110th birthday (she died in 1954), and with that came the expansion of public challenges to set records to have “the most people dressed as Frida Kahlo” at museums and art spaces, including Texas ones. There’s some controversy around that.

And also generally, of course, there’s been worldwide renewed interest in exhibitions and scholarship around historical Mexican artists, including the women artists of the last century, and Kahlo’s name tends to top that list. The Times adds: “She may not have approved of being cast as a variety of Barbie, the best-selling doll whose image Mattel has updated so as to address criticism that in body type and lifestyle it had perpetuated damaging stereotypes about women.” It probably doesn’t help that Mattel has turned Kahlo’s beloved signature unibrow into a more groomed and conventional two-brow feature.

Mara Romeo, who says she is Kahlo’s great-niece, told one media outlet: “I would have liked the doll to have traits more like Frida’s, not this doll with light-colored eyes. It should be a doll that represents everything my aunt represented, her strength.”

Obey the Brow at TBH