The Gorilla in Corsicana: Who Made It, Where Did It Go, What Will Take Its Place? 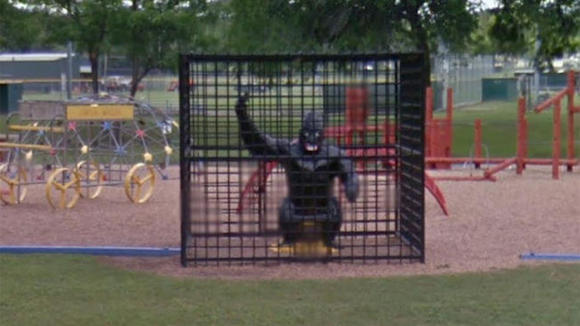 A statue (sculpture?) of a gorilla, which has been in place “for years” has been removed from a playground in Corsicana.

This, via NBCDFW: “City officials said they removed a gorilla statue on Monday that was inside a cage at Community Park after receiving numerous complaints from some citizens that the statue was racially insensitive.”

The mayor of Corsicana, Don Denbow, says that the city had received complaints, and this and other news reports mention some of the following: That 1) another gorilla may be made to replace this one; 2) there will be a candlelight vigil for the removed gorilla; 3) the cage was added, after the gorilla was originally installed, in order to protect it from kid climbers because presumably the gorilla wasn’t made for that kind of interaction; 4) the cage has been left in the park and is starting to be turned into a kind of shrine by the city’s citizens (ed note: A shrine to… ?); 5) there is a petition to bring back the gorilla, currently signed by more than 2000 people.

What is never mentioned is the name of the artist or artists who made the gorilla in the first place. WHO MADE THE GORILLA? Also: why was it placed in a playground if it was never meant to be climbed?

Also also, was it possibly the cage that made the animal a charged or offensive symbol? Or the gorilla himself? Obviously, if the gorilla can’t handle being climbed, then removing the cage wouldn’t fix the problem. But what other types of animals are displayed in that park? If another, more stable gorilla is placed in the park, aren’t the civic waters around a gorilla in that park already pretty muddy? Why would an artist want that commission?

“Denbow said city officials are hoping to display the statue elsewhere. The cage is still at the park and may be turned into a base for a new climbing structure.”

UPDATE: As of this afternoon, there are social-media murmurs that the gorilla will be returned to his cage in the park when the weather clears.

In Conversation at 100W: An interview with Kyle...