Swimming with Sharks: Postcommodity and Wafaa Bilal in a Sea of Hammerheads 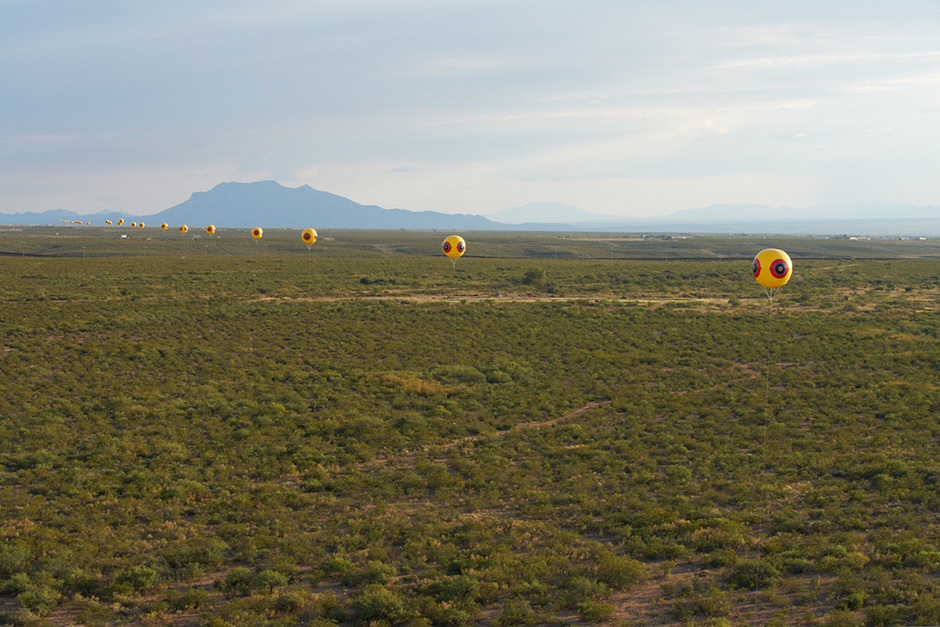 I congratulate the organizers of the most recent Texas Sculpture Symposium, a near-annual event often hosted, almost by default, by Texas Tech University in Lubbock. The symposium was held earlier this month, and I attended along with Glasstire’s Brandon Zech. The people in charge this year (TTU’s William Cannings, Cody Arnall, and Joe Arredondo) have their heads in the right place.

The name of this year’s symposium was Conflict: Art Practice Addressing Global Concerns, and the keynote guests were the Iraqi-born Wafaa Bilal and the collective Postcommodity, and both challenge any traditional definition of “sculpture” in this era where hard definitions are failing us and failing art. In the recent past, you’d probably label these artists as primarily “conceptual,” and I think a lot of people would love to claim that these artists, political as they are, fall into the realm of social practice. But they don’t. (Postcommodity in fact fiercely rejects this label.) As social practice has increasingly aligned itself with specific community activism — just as it tells you (also increasingly) what to think and how to feel — Bilal and Postcommodity embrace the gray areas thrown up by human behavior through the wider, longer lens of conflict. Their work doesn’t resolve in any pat way. Their projects are complex, open-ended, and often mark the messy beginning of profound and ongoing conversations. They resolutely do not preach. They make themselves almost painfully vulnerable to interaction and people’s very mixed reactions to the work. The lack of self-righteousness by these artists is — in our era of Instagram egoism, slick self-branding, and market-driven art (even market-driven ‘political’ art) — pretty dazzling. As I listened to them speak about their work over that weekend, I kept thinking: Chris Burden’s ghost is here, and I’m happy.

They’re also uninterested in loyalty to any one material or medium, which makes them surprising choices to lead a regional sculpture symposium dedicated to discussions around what’s happening in sculpture right now. Sculpture as a field tends to throw up artists dedicated to or even obsessed one or two or three materials: steel or ceramic or fur or plywood or whatever material they’ve landed on and decided to work for decades. But Postcommodity and Bilal, like conceptual artists, start with the big idea and then find the materials and modes that will communicate it. This doesn’t make them non-sculptors, exactly, but it does bring an unconventional set of ideas about what constitutes sculpture to Lubbock, the land of the hammerheads. (I learned that term while I was there that weekend. Hammerhead = usually a dude sculptor who makes large heavy things in a metal shop and does a lot of welding. I’d use the term affectionately, but the Panhandle is… awash in them.) 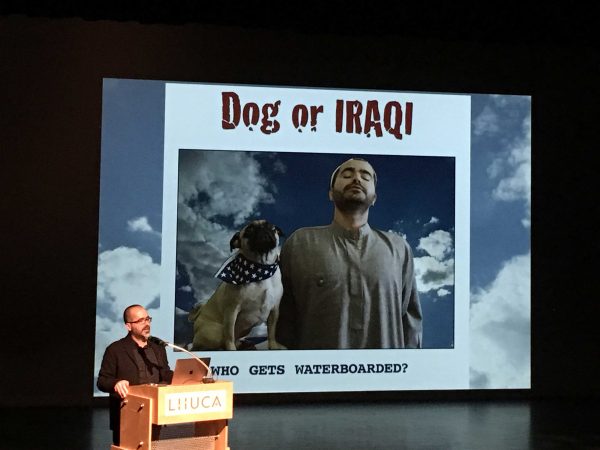 There was plenty of programming in and around the Friday and Saturday of the event: exhibitions on and off campus, art tours, a panel discussion featuring TTU art alums, drinks and dinners. All of these promoted more cross-pollinated conversations, so it was fortunate that the first official part of the program was Bilal’s keynote lecture on Friday evening, because it gave attendees plenty to chew on from the get-go. Bilal lives in New York and teaches at NYU. Before he came to the US in 1992 to get his art degrees at University of New Mexico and the School of the Art Institute of Chicago, he experienced the kind of political and personal hell most Americans can’t imagine; arrest and persecution under Saddam Hussein, living in a refugee camps in Saudi Arabia and Kuwait. His brother was killed at a checkpoint. 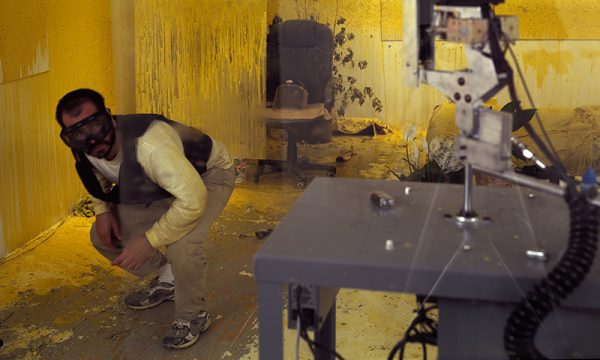 Bilal’s most well-known work, from 2007, is called Domestic Tension, (a.k.a. Shoot an Iraqi), in which he sealed himself in a cell-like room for a full month with cameras and paint-ball guns pointing his way; the guns were mounted on the walls and remote controlled by the internet-surfing public. He was shot at by unseen strangers thousands of times (an estimated 60,000 times, actually), 24 hours a day. The work was inspired by the remote-control gunners and missile operators on the US side of the Iraqi war. There was an online chat room he maintained throughout as well, as if being shot at by people from more than 100 countries wasn’t enough aggression pointing his way. The chat vitriol was as non-stop as the shooting, though as anyone who has spent any time on Reddit has figured out, people can be awful and people can be wonderful. A number of times hackers (also strangers) managed to jam the guns — an act of protection of the artist against the shooters.

As Bilal talked us through this and his other major projects, he was so grounded and philosophical about people’s reaction to him and his work that he emitted a kind of guru-like calm and common-sense wisdom about conflict and expectation. Here’s an artist who has, through his life and art, earned the equivalent of about 13 hard-won PhDs in the possible range of human behaviors, from the most generous to the most banal to the most baldly sadistic. The way these behaviors manifest during times of conflict is the key to his thesis, but the kind of conflict internally gripping the population of the US is, I think, no less problematic to him that of any other war. He’s not offering solutions with a capital S. Rather, he seems to be pointing out ways we’re most likely to engage, or fail to engage, during conflict, and this shot at acute self-awareness may create in the viewer (and even the artist) a possibility for dialogue and personal redemption, however small, novel, or intimate. 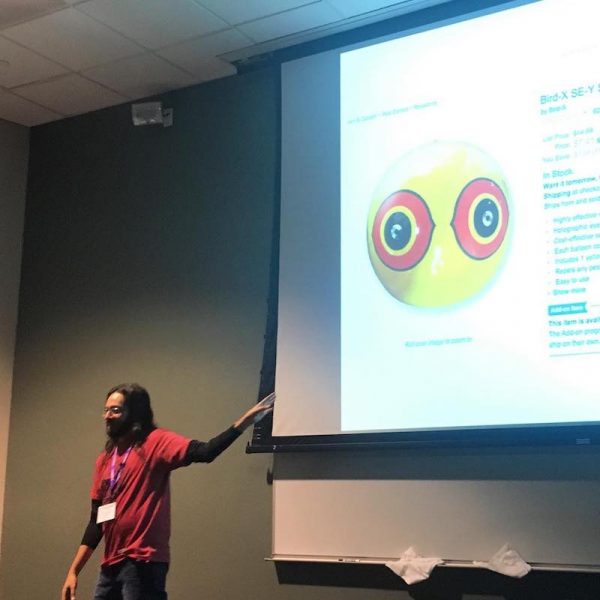 The second keynote, by one of the three members of Postcommodity (these guys are in high demand; the other two members were off in other parts of the world giving similar talks) took place early Saturday morning. If you haven’t yet heard of Postcommodity, my guess is that they’ll start taking up some of your art-brain bandwidth sooner rather than later. These three artists, all Native Americans living and teaching in different parts of the US, are the reason I drove to Lubbock. I think what Postcommodity does is insanely smart and compelling, and a way forward for impact-making art in our troubled times.

Postcommodity’s Cristóbal Martínez spent much of his allotted time talking about the inception and execution of Repellent Fence, the collective’s headline-making project in which Postcommodity, after literally years of negotiations with officials on both sides of the border, launched and floated two miles’ worth of giant helium balloons across the Mexico-Arizona border. It was 2015. The balloons, hovering in a single file 75 feet in the air, were festooned with the familiar “scare-eye” graphic found on smaller balloons people can buy to repel hungry and shitting birds from their properties and gardens. In the case of Repellent Fence, the gigantic eyes are recast as all-seeing, silent witnesses to both the severed and still-unified spirit of the region, in this age of hard, artificial borders and fateful migrations. It’s a nuanced, dignified project — ambitious, generous, mysterious (and frankly, gorgeous) — and its non-didactic message is open-ended while, perhaps, pointing a way toward a more unified collective consciousness. Martínez described the balloons and their tethers as “sutures” across the gaping wound of political strife, desperation, misunderstanding, and the border wall itself.

As a native Texan, I’m so taken with this work and so optimistic about what artists are capable of doing around border and immigration issues that my brain has been vibrating ever since his talk. I’ve known about Repellent Fence since it happened, but hearing and seeing Martínez discuss the project was such a quiet and formidable experience — so unexpected and poetic — as to be one of the most punk things I’ve witnessed in years.

Martínez hit on the groups’ other past and present projects; the collective, founded in 2007, almost seems to just be warming up, though it’s been showing internationally since its beginning. The discussions I had with people over the weekend — the speakers, the attendees — are the same kind of discussions being had by artists everywhere these days. How do we respond to what’s happening in the world? This year’s symposium, which asked that question, was exactly the interrogative direction the symposium’s organizers should continue to take for the foreseeable future. We’re in Texas, a gun-loving state with the nation’s longest border with Mexico. Let’s use that fact as a springboard for asking the hardest questions about what art can do.

What a wonderfully immersive article on Bilal and Post Commodity. Thank you so much Christina. It was almost as though I was communicating directly with the artists.

I can’t help but wonder if this has anything to do with Erick’s hammerhead in Honolulu.
Code speaker are you?

Dear Amita,
Communicating directly with the artists can be a real letdown.

And everything ( absolutely everything) looks better in reproductions than it looks in real life. ‘Real Life…..’what a great name for a show that sells nothing.
Hysterical laughter here! I’m howling at ‘ your comment is awaiting moderation’ sign. My hysterical laughter is usually a bad sign but right now…. it feels so good.
I don’t laugh out loud and/or at others nearly enough. I’d forgotten how much I laughed here. Sad.