Gallery Up a Creek: Waller and San Pedro 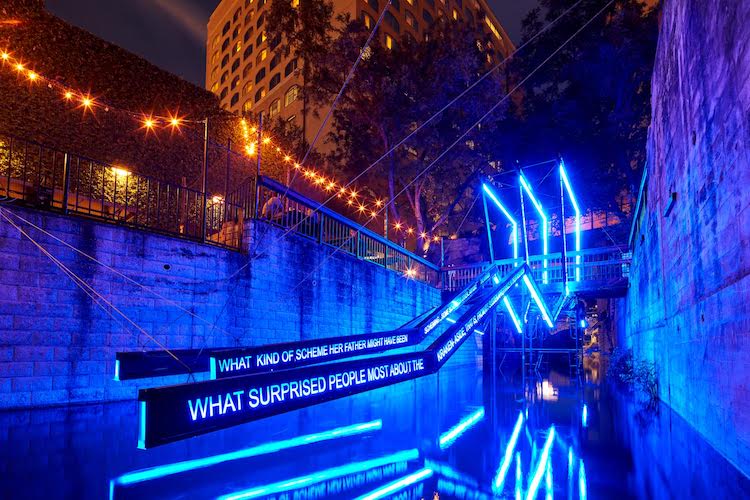 Creek-side art installations are mega-popular in Austin, judging by the crowds that packed walkways for the Waller Creek Conservancy’s annual Creek Show this past November. Some 20,000 folks squeezed through its pathways over the event’s ten-night run. Similar appreciation flows for San Pedro Creek in San Antonio. Both historic waterways are the subject of ongoing improvement and restoration projects that include components of contemporary art.

Waller Creek is named for Edwin Waller, who platted the original town of Waterloo, soon renamed Austin, in 1839. The creek rises from its headwaters in North Austin, then glides through the yard of the Elisabet Ney Museum (where for a time the sculptor had the creek dammed to create the small Lake Ney) before trickling through the University of Texas and the redeveloped/newly constructed medical complex and med school. From 15th Street south to the Colorado River, a chain of five creek-centric parks are envisioned, from the “vibrant gathering spaces” of 11-acre Waterloo Park to the “new connectivity” of Waller Delta and Pontoon Bridge at the creek’s mouth, where it joins the Colorado River.

In San Antonio: Human habitation around the San Pedro Springs, which gave life to the San Pedro Creek a few miles northwest of the Alamo, goes back more than 10,000 years. Spanish explorers named the area San Antonio on the feast day of St. Anthony de Padua in 1691. The first iteration of Mission San Antonio de Valero — the Alamo — was founded near San Pedro Springs in 1718. For centuries an important source of water for humans, wildlife, and crops, the creek runs for two miles before joining the San Antonio River on the city’s southside. In recent times it has become a concrete-lined drainage ditch. The San Pedro Creek Improvements Project, rolling out in four phases, aims to restore the creek’s natural beauty and create a linear park. The San Pedro Creek Culture Park will accommodate permanent and temporary works of art and also provide a setting for music, dance, and spoken-word performances.

The first phase of San Pedro’s improvements will be dedicated in May. There will, of course, be murals. And while I sometimes suffer from mural fatigue, longing for an unmolested wall of vintage weathered brick (I’m looking at you, Deep Ellum in Dallas), I’m encouraged about these panoramic works of digitized paintings transferred to tiles. They seem likely to be as keenly rendered as Jesse Treviño’s mural at Casa Navarro State Historic Site. “Each artist commissioned to create a mural was given a different theme,” says Carrie Brown, Public Art Curator with the San Antonio River Authority.

Adriana Garcia’s mural, De Todos Caminos Somos Todos Uno (From All Roads, We Are All One), depicts the merging of indigenous and European cultures through the story of San Pedro Springs. Joe Lopez’ piece, Bellos Recuerdos del Teatro Alameda y Tiempos Pasados (Beautiful Memories of the Alameda Theater and Times Passed), pays tribute to the days when the theater was el corazon (the heart) of San Antonio’s west side. Born with only one hand, Lopez regards Jesse Treviño, who lost his right arm in Vietnam and learned to paint with his left, as an inspiration.

Katie Pell’s two murals, entitled Red Arch, Green Arch, reveal flora and fauna that once flourished along the creek and that, hopefully, will return to some degree with the revitalization. The undulating blue forms of Alex Rubio’s AQUA offer an abstract mirror to the flowing waters of San Pedro Springs. Though springflow was impeded and even stopped by the pumping of Edwards Aquifer groundwater in the 20th century, more recent conservation efforts have led to increased, if intermittent, flow. The artist’s own survival could be a metaphor for source-water’s struggle to live as a natural force. As Bill Fitzgibbons wrote in a 2007 issue of BOMB, a bullet from a drive-by shooting slammed through Rubio’s chest on Christmas Eve in 1986, narrowly missing vital organs.

The project’s first phase also includes texts, selected by John Phillip Santos, author of Places Left Unfinished at the Time of Creation, chiseled into creekbank limestone. When the San Pedro improvement effort first broke ground in September 2016, performance of an opera entitled Las Fundaciones de Béjar, its libretto written by Santos, commemorated the event. “As in some ancient legend,” Santos writes, “a city emerged out of these waters. A city bubbled forth out of this spring-fed stream, running from long before there was anyone here to witness it — or drink from it. 300 years long, the story of San Antonio is but a brief episode in the millennial chronicle of San Pedro Creek.” 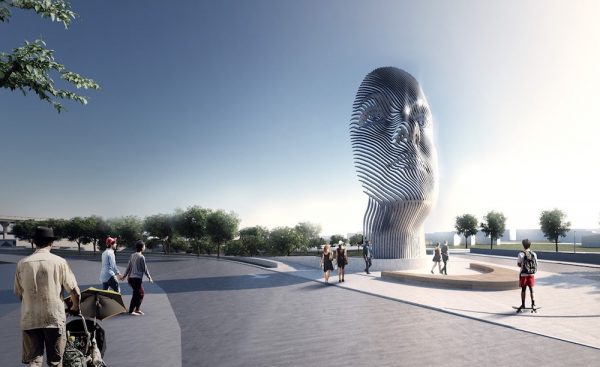 A 45-foot-tall, stainless-steel sculpture planned for phase one’s San Pedro Creek Plaza de Fundación has been delayed and is now expected to be installed late this year. Plethora, by Cuban-born, Barcelona-based Jorge Rodríguez-Gerada, as described in an artist’s statement, “…refers to the sustenance that San Pedro Creek represents to the San Antonio community. The title of the sculpture, phonetically understood in both Spanish and English, alludes to the great abundance of water and how it irrigates the social fabric that feeds, grows and recognizes itself through a collective outlook, just like the primordial path of the water. The artwork pays homage to the location that allowed the city’s genesis; to the trials, tribulations and triumphs of its people; and the diversity of its population through the use of innovation and creativity.” Commissioned by Bexar County, the $735,000 expenditure has caused political controversy, and the legislative action committee Concerned Women For America has complained that tax dollars are being used “…to fund a monument dedicated to a pagan goddess.”

Back in Austin, Waller Creek could use a pagan goddess or two, not that there’s anything wrong with the light-based temporary pieces that have adorned annual episodes of Creekshow since 2014. Many of them — like HA Architecture’s Fotan Fable (see top image) with its blue metal tentacles illuminated from within to reveal a text by Manuel Gonzales — are engagingly atmospheric and dramatic. (Since I attended on the super-crowded final evening, I only caught bits of the text, like an aleatory Burroughs cut-up.) But with James Turrell’s Skyspace within walking distance of Waller Creek on the UT campus, and with Ellsworth Kelly’s nearby Austin opening this month, a piece the late Kelly hoped would reveal itself to visitors as “a place of calm and light,” the creek zone is becoming one of tall artworld cotton when it comes to light-based artworks. 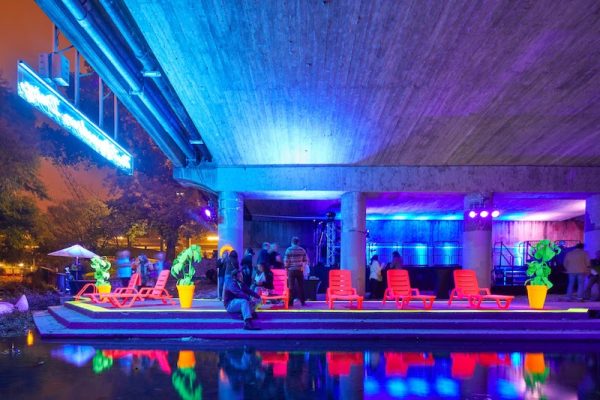 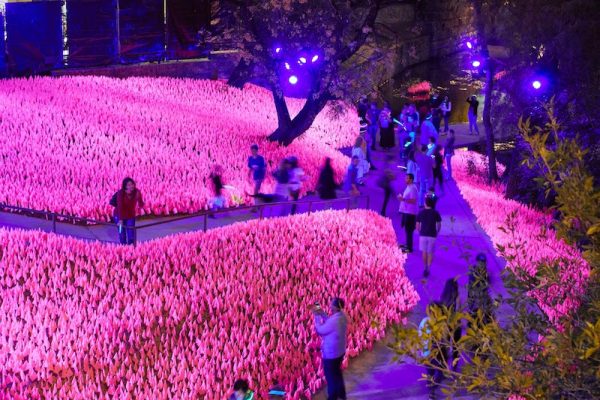 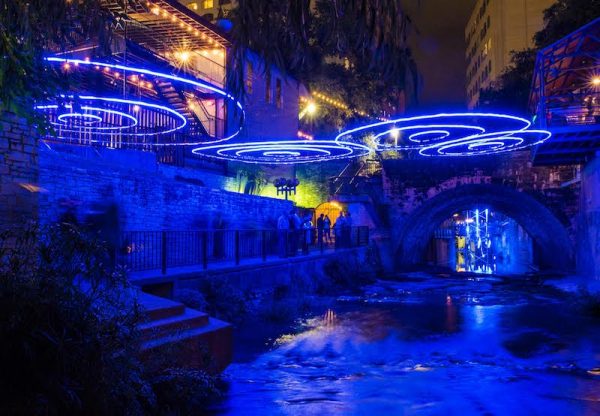 Most of the Creekshow works are fabricated by design teams and architectural firms, and some — like 2017’s No Lifeguard on Duty by Asakura Robinson — have kind of a black-light B-movie stage-set feel. The landscape architecture group dwg. planted 80,000 pink fluorescent survey flags in thick fields along the creek for Night Garden, generating an effect suggesting an exotic snow-cone farm. A three-person entity called TWO + COLLABORATIVE projected bicycling video onto an assemblage of steel mirrors in their installation Blind Spot, underscoring the near-invisible nature of bicyclists on Austin streets and Waller Creek gurgling along unnoticed beneath bridges. In Submerge by Davey McEathron Architecture with Studio Lumina and Drophouse, concentric rings of blue light above the Creekshow strollers’ heads conspired to produce a sense of being submerged in the creek. “The rings of light,” the group mused, “create a moment that envisions a future where Waller Creek becomes an area of exploration and respite; a site of symbiosis between its historic waters and those who walk among them.” 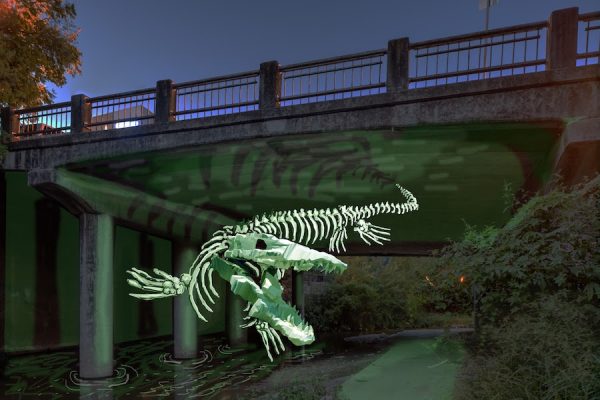 In 2016, Creekshow commissioned Invisible and Absolute, a work of sculpture by the Austin painter and installation artist Jules Buck Jones. He chose to create an extinct sea lizard, the mosasaur, which swam through Central Texas’ shallow seas some 65 to 100 million years ago. A nearly complete mosasaur skeleton, discovered in Onion Creek by UT geology students in 1935, is on exhibit at Austin’s Texas Memorial Museum. Per an artist’s statement: “Extinct creatures like the mosasaur are simultaneously very real and very not, only present today in the form of fossilized bone. ‘Invisible and Absolute’ asks the question: What is scarier? A 40’ monster or extinction itself?” 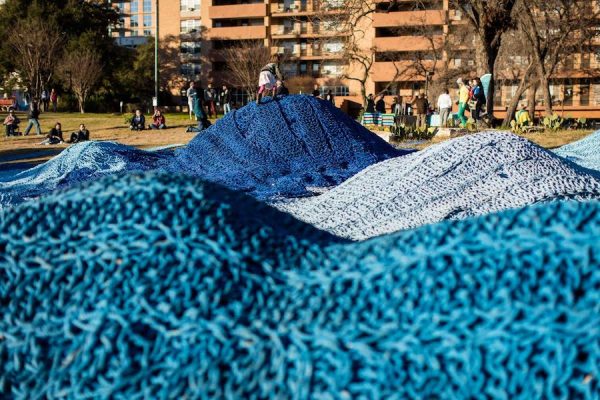 Aside from Creekshow, in 2016 and early 2017, Waller Creek Conservancy partnered with The Contemporary Austin to present Hurlyburly by New York artist Orly Genger near the creek’s mouth and on the shores of Ladybird Lake, another name for the stretch of the Colorado River that divides North and South Austin. An interactive work composed of masses of painted and repurposed lobster rope, Hurlyburly lured children to play and dancers to cavort and contort as it echoed “…the languid flow of the creek.” 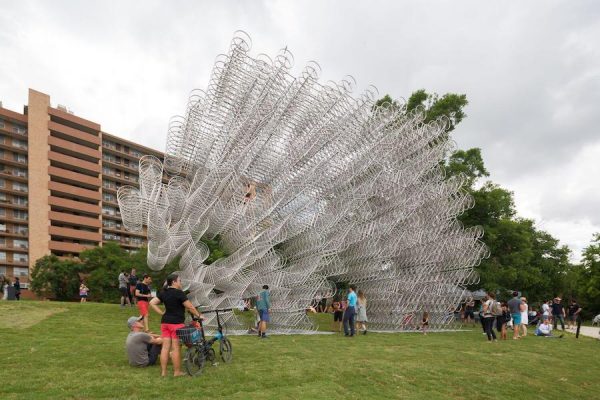 Currently, the conservancy and the museum are presenting, in the same spot, Ai Weiwei’s 2014 sculpture, Forever Bicycles. That piece consists of the wheels and frames of some 1,200 Forever-brand bicycles manufactured in Shanghai during the artist’s childhood, mounted in a static assemblage that achieves a stunning effect of shimmering, pulsing motion. 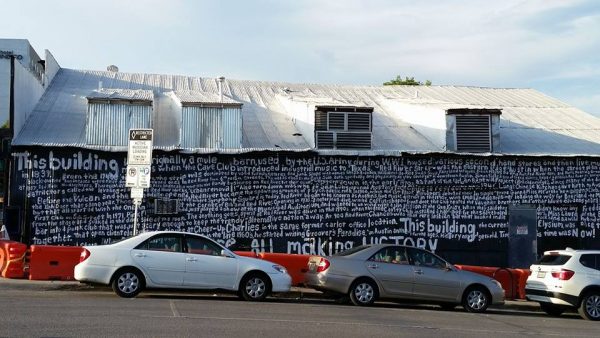 Tim Kerr’s mural with text by Michael Corcoran is at the corner of
Red River and 7th Streets in Austin.

From 12th to 7th streets, as it snakily parallels Red River Street, Waller Creek passes through the so-called Red River Cultural District — a jumble of music venues, new hotels, restaurants, and street creatures of every stripe. On the sheet-metal exterior of the Elysium club, at 7th and Red River, a black-and-white mural by Tim Kerr encases a tasty text by music writer Michael Corcoran. The mural informs us that the U.S. Army used the structure as a mule barn during World War I, then moves through a factoid-packed account of the street’s days as a sleepy realm of used furniture and junk shops — when the Elysium structure was an emporium called Snooper’s Paradise — and its eventual transformation into a pioneering niche of live music spots. That name, Corcoran writes, gave Doug Sahm the inspiration for his anthemic tune Groover’s Paradise. The mural’s concluding words might speak wisely for the ancient waters of Waller and San Pedro: “History never gets old. Time is time was NOW.”

*The Waller Creek Conservancy is accepting ideas and proposals for the 2018 Creekshow until March 2.

A River of Lights Takes Over Downtown Austin