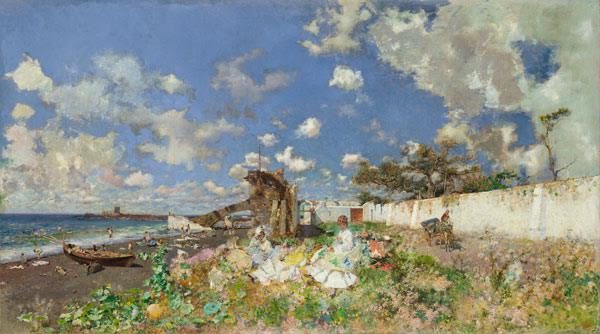 Southern Methodist University’s Meadows Museum in Dallas has announced its recent acquisition of Beach at Portici, the last painting by Mariano Fortuny y Marsal (1838-1874), a Spanish painter popular with American collectors during and after his lifetime and one particularly celebrated for his “ability to capture light in paint.”

Alexander Turney Stewart, a New York collector, purchased the painting in 1875. The Meadows acquired the painting from his heirs. Via the Meadows: “The acquisition complements the only oil painting by the artist currently in the Museum’s collection: a smaller, study composition for the painting of the same stretch of beach at Portici. The newly acquired painting includes essential elements of Fortuny’s developing style, such as the dynamically posed figures, the use of strong architectural elements in the background to define the space around the figures, brushwork that anticipates the rise of Impressionism, and meticulous attention to detail.”

Mark Roglán, Director of the Meadows, states: “… it makes a perfect acquisition for the Meadows, addressing our mission to bring the best of Spanish art to American audiences, and to highlight its role in the development of America’s own culture and aesthetic.”

The Meadows has Beach at Portici on view now, and then starting this summer through September, “it will be the subject of a focused exhibition, At the Beach: Mariano Fortuny y Marsal and William Merritt Chase, where it will be paired with a loan from the Amon Carter Museum of American Art, Chase’s Idle Hours (c. 1894). The Spanish artist had a significant impact on many important American artists and perhaps especially on Chase, who knew his work well and greatly admired it.”