Activist Artists Call for Noise Against One Year of Trump 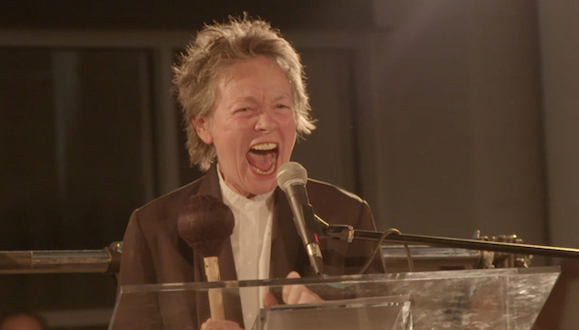 In response to the one year anniversary of President Donald Trump’s inauguration, many activist artists are planning nationwide readings, panel discussions, workshops, and a special Spotify “creativity boost” playlist curated by artist Laurie Anderson, reports artnet News. #ArtActionDay on January 20, 2018 is being organized by The Federation, a group started by Anderson and producers Laura Michalchyshyn and Tanya Selvaratnam to protest Trump’s travel ban. The Federation’s website states an impressive list of #ArtActionDay artist and organization participants:

Artists who wish to start a #ArtActionDay in their local communities can check out The Federation’s DIY tips. The Federation’s Selvaratnam said in a statement: “We decided on that day because this past January 20, arts institutions were encouraged to close their doors in protest of the inauguration. A terrible idea! Never tell artists to be silent. On January 20, we want artists to be more loud and visible than ever.”

I find it hilarious how so many white artists love to make art about Trump because he is soooo oppressive…yet white artists still make art that is genuinely offensive to ethnic people everyday or that appropriates other people’s culture. It is like every mediocre white artist jumped on a band wagon following Black Lives Matter to stay relevant and Trump was the easiest subject matter….like they could have been making anti Rothschild art or anti Sallie Mae art this whole time. They could have already cared. It is so clearly done for attention. I am against any white anti Trump art.

What about mixed brown and white anti Trump art? Also, what if a “white” artist has been making politically charged art since Bush Sr, do they get a free pass?

A good eye can tell if someone is making something for attention, or if what we are looking at has merit. I’d say if someone has finally opened their eyes then more power to them (in most cases).