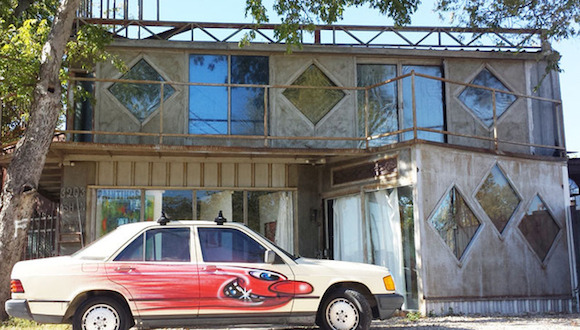 For the past couple of years, Dallas’ fire marshal’s office has been inordinately active in shutting down art spaces that it deems not up to code and/or not in possession of a proper Certificate of Occupancy (CO). Some of the spaces affected were shut down during their public receptions and events, while others were shuttered before they could officially open their doors for events. Unlike other spaces that have received fines or citations and decided to right their statuses with the city, Ash Studios, a multi-use venue, artist collective, and live-work space located in Fair Park, has contested the fire marshal’s fine, citing that their space is a social sculpture and therefore does not fit into any existing CO requirements.

The plaintiff in Ash Studios’ court case, Fred Villanueva, co-founded the space with artist Darryl Ratcliff in 2012. According to the Dallas Observer, Villanueva’s legal representation, Paul Saputo of the Saputo Law Firm, claims that Ash Studios “should have a separate CO designation than the ‘indoor commercial amusement’ CO recommended by fire inspector Keith Wilson,” as the studio is not intended to act as a commercial space. Saputo goes on:

“If the city has the power to tell him that he cannot bring these people together and create the social sculpture — of which the necessary component is the building where it all happens — then that work will no longer exist. It’s akin to ripping up an artist’s canvas and setting it on fire. He has the right under federal law to prevent the destruction of his work as long as it’s of recognized stature. Ash Studios is of recognized stature — it’s well known in the arts community; it’s vital to the city.”

In rebuttal, the city’s attorney has argued that since Ash Studios has four walls and a roof, it is a building, and therefore is required to have a CO to assure the safety of the building’s occupants.

Darryl Ratcliff also spoke out in a written statement about why Ash Studios brought its case to court, reading in part:

“Our motivation for contesting the citation has a lot to do with the greater environment of the Fire Marshal’s systematic targeting of cultural spaces and the unintended policy effects this has had. Dallas has lost at least 12 existing cultural spaces due to this policy, and there are probably dozens more that do not exist because of this policy. Dallas has lost some of its best cultural talent because of this policy… . Although we appreciate the efforts of city staff who have been working on this issue, the reality is that Dallas is substantially less interesting and culturally vital than it was before this policy was implemented.”

The judge denied Villanueva’s request to dismiss the citation, which means the case will continue to a jury trial on January 3, 2018.

The Physical Impossibility of Being Black in the...

It is important to support Ash Studios in any way you can.

I urge all artists living and working in Dallas to keep abreast of this issue and, if at all possible, be a presence in court. It’s an education, believe me.

Be advised that court dates sometimes change and there is often a great deal of waiting around is to be expected once you get there.

To put it mildly the plaintiff’s case is crapola…I would be shocked if the argument held up in court. However, I’m sympathetic to the realty of having an inexpensive”clubhouse” where young artists can come together to share ideas, practice and even habitat. But, a structure where art is exhibited and is occupied is not a “cultural sculpture” (that sounds pretty specious)…it’s a building. And buildings can be dangerous places for people when not up to code. The only thing the city of Dallas is doing is to work hard at avoiding another “Ghost Ship Fire”. That’s in the interest of both the city and the arts community.

You go, Fred!
I’d think some kind of “selective enforcement” argument might also apply, although maybe that would require artists to be deemed a “suspect classification” – a label I hope we’ve earned! (though not for constitutional purposes).

“Ash” maybe a poor name choice for an venue without a CO. There needs to be a balance between public safety and silly rules. If you can not get a CO because you only have one loo, that’s crazy. If it’s because it’s a tinder box with one door — not so crazy.

Good luck fighting city hall! Dallas used to be bidness friendly. Hopefully you get a CO. I see an opening where all patrons are issued a fire estinguisher. What could be safer?

Ash Studios was asked to exhibit at the library and they practically did not show up until the last day of installation despite having two weeks for the task. They took clips and put them inside track lighting, put screws through the loops of the clips and hung art from that. When asked to take it down they had a tantrum and emailed me with insults before messaging my manager. The library has worked hard to lessen drug use and violence so why would you dangle screws from the ceiling as temptation like that? It is hilarious they would fight the City about such a topic when they put metal clips in a light socket in a city building.

If the art scene of Dallas does not have the business savvy to comply with the law then Dallas has not lost a thing but the village idiot. Cheap hipster art in a ramshackle building is not a loss.

The lawyer says ‘it’s akin to ripping up an artist’s canvas and setting it on fire’…umm yeah exactly what the City is hoping to avoid. Really poor choice of words coming from a lawyer.

Maybe Darryl and Fred should apply for jobs at the City of Dallas and use their time to make change from within instead of trying to squeeze money and attention from the city or complaining about the city. Get in there on the inside and push paperwork yourself to try and make real change instead of hosting brunches and taking photos at events.