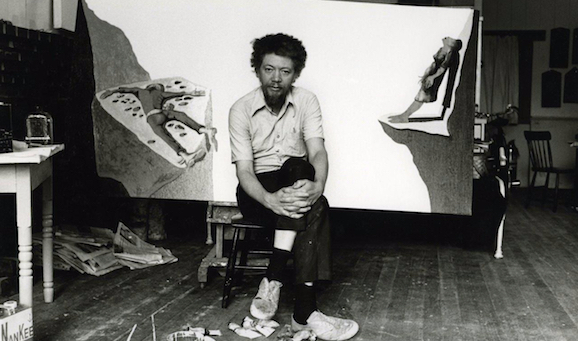 Benny Andrews in his studio.

Today the McNay Art Museum in San Antonio announced its recent acquisition of three major works by three African American artists: The Cop, by Benny Andrews; ghost: rhythms: III, by McArthur Binion; and Kwabena, by Rashaad Newsome. All three works are collages, and the purchases were made by the Museum in conjunction with the McNay’s Contemporary Collectors Forum.

“The acquistion of these artworks significantly enhances the McNay’s holding of examples by artists of color and assists the Museum in expanding the evolving definition of American art. These acquisitions especially build on the McNay’s continuing efforts to broaden and deepen the collection of works by African American artists. The three collages by Andrews, Binion, and Newsome here will be featured in Something to Say: The McNay Presents 100 Years of African American Art, opening February 8, 2018.”

Benny Andrews (Madison, Georgia, 1930-2006) “received a BFA in 1958 from the School of the Art Institute of Chicago. His work is featured in many prominent collections, including the Metropolitan Museum of Art and the Museum of Modern Art in New York.”

McArthur Binion (Macon, Mississippi, b. 1946) was the first African American to graduate from Cranbrook with an MFA. “Binion lives and works in Chicago, Illinois. His work was included in the exhibition Viva Arte Viva in the 2017 Venice Biennale, Italy.”

Rashaad Newsome (New Orleans, Louisiana, b.1979) got his BA from Tulane and was featured in the 2011 Venice Biennale and the 2010 Whitney Biennal. “Newsome’s work is in several major collections, including The Studio Museum in Harlem, New York; San Francisco Museum of Modern Art, California; the Whitney Museum of American Art, New York, NY; and the Brooklyn Museum, New York.”