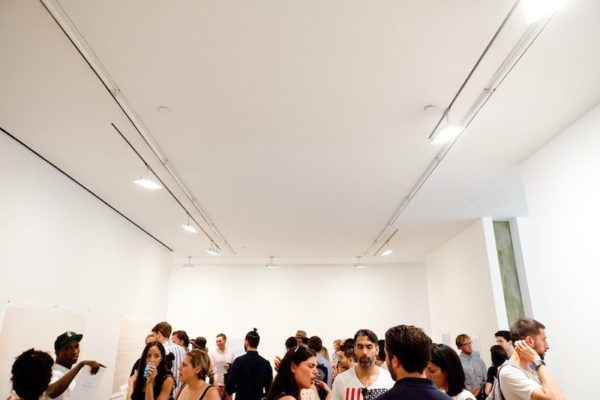 Image via New York on My Mind

Can a gallery close its doors but still maintain the identity and presence of a gallery? The art world and its market trends are always in flux, one way or another, and I’d guess that now is a good time as any to find out.

Last week, during what is thankfully not a news cycle about a spate of gallery closings, the Houston gallery Art Palace announced it would close the doors of its physical space and yet continue to do business — that it would explore new avenues for working with its roster of artists and getting the work in front of audiences. I know the gallerists in question, Arturo Palacios and Hilary Hunt, and have every reason to believe that they are invested in continuing to show and sell work. We don’t know what their version of this looks like yet, and it may be some time before it takes shape, but the announcement itself implies something beyond the more common transition of a gallerist closing a permanent space while remaking him or herself into a straightforward private dealer or consultant. There are countless (and successful) examples of that across Texas. Palacios and Hunt seem to want to try something different.

I feel like it should go without saying that the overhead required to run a full-time brick-and-mortar commercial gallery is, even if it’s modest, a tremendous budget consideration relative to an art dealer’s profit. Rent, utility bills (which are higher for business accounts than residential ones), insurance, maintenance, code compliance, staff to be on hand for open hours, the cost of openings, shipping, private viewings, photography, storage… .  The list of costs goes on. My guess is that plenty of gallerists, who are either having trouble keeping afloat or who just flat-out resent their space’s money and man-energy costs, have fantasized about jettisoning their permanent physical space and finding liberation in some new model of doing business. I believe that if there were plenty of success stories out there about the creative re-imagining of what it means to be a “gallery,” more would do just that. But there are solid reasons for galleries to stay put and keep paying rent. Some are practical, and some are purely psychological, and they have real weight.

Which isn’t to say that having a permanent physical space should continue to be the standard, though I think it will be for some time to come. But I know gallerists in London and New York, if not Texas, who say that people coming through their spaces — both during regular daytime hours as well as for evening artist receptions — has dropped notably in the past seven years or so, since social media became so many people’s way of life. The hyper-connectedness of social media gives people a sense that they’ve experienced something without having to show up. The gallerists sometimes wonder why they bother paying for a space, especially when they know their collector base buys work from them whether or not they attend any particular show. The collector comes in when it’s convenient (between trips to Martha’s Vinyard and Venice, perhaps) and goes into a back room to view a work from storage, or the work is sold via JPEG. Generally, art openings are well-attended if there’s a sense of hype surrounding a show, but that can be as much about how well a gallery cultivates a “scene” and whether the opening is capable of attracting a cool crowd. In that case, the art can seem beside the point.

Though we should admit that often a gallery’s crowd of young, groovy artist types gives the gallery a street cred that reassures older collectors who pay attention to such things. A popular gallery sometimes feels like a hybrid of a non-profit institution, a private club, and a sales enterprise, but the gallerist is hyper-aware of who’s buying, or at least who’s adding to the quality of the conversation, which can lead to more credibility which can lead to more sales. Once upon a time the only people who ventured into serious galleries (ever) were people who really loved art, or wanted to buy art. So, on the flip side of people not showing up anymore, you have “gallery nights” in nearly any large city — gigantic movable feasts of disconnected people just looking for something to do. Most gallerists would far prefer to host 20 serious art patrons at a private reception than 200 fashion-chasing randos who saw the event mentioned on Twitter an hour earlier. But there’s tremendous pressure on a gallery to participate in such events, just in case any exposure is — on the off-chance — profitable exposure.

Just as these new realities are sinking in, it still seems true that keeping a full-time space implies stability, solvency, and long-term investment on the part of the gallerist. It says: I believe in my artists, so much that I built a permanent home for them. Walking into an established gallery is like walking into the house of a nuclear family where the parents are still together and the kids make decent grades. If you’re a collector, it feels like a sane and safe place to spend time and money. Most collectors who are spending real money on art are a little older, too — Get X-ers and Boomers. Generationally they expect a gallery to have roots, because that’s the model they grew up with. And the presence of a good gallery in a neighborhood is, outside the more recent examples of unwanted re-gentrification, a kind of show of investment in a community, which also feels comfortingly predictable and solid to art patrons, so that visiting the space is like visiting an old friend.

How much of that ineffable stuff translates into sales is something a gallerist has to weigh every time they negotiate a new lease or pay rising rent. And I suspect that the newer generation of gallerists have some more flexible ideas about how to engage an audience, even if they’re not sure how to translate that into profit.

And I know that younger artists, as a demographic, aren’t nearly as fixated on gallery representation as they were even ten years ago. I think the 2008 crash and the tech revolution pretty much wiped out the Millennials’ sense of permanency, in terms of money or geography. Trying to explain to a 23-year old how a grand old London gallery took care of its artists as recently as the year 2000 is like explaining what life was like before smart phones. Not only does it not register, but they don’t even really care. Our youngest artists do not expect any gallerist or dealer to pay for their production (and shipping and travel) costs, and to do all their tax accounting, and to find them a studio. And a studio assistant. Etc. Those days of full service galleries may be over forever, outside the handful of international mega-galleries. While some gallerists may sigh in relief to be out from under such myriad obligations, the fact that it may have eroded a sense of formality and propriety in the art world can cost them traditional collectors who, again, want to sense that the art dealer is fully invested in the well-being of their artists. Nowadays it seems like the best a gallerist can do is give each of its artists a solo show every two years and promise to take the work to art fairs, which have eaten up ghastly amounts of any gallery’s operating budget.

I don’t know what a new business model looks like for Art Palace, or any gallery hoping to hang on to its hard-won image while breaking free of a lease. Palacios and Hunt’s vision may be as curatorial as it is dealer-oriented, and this shouldn’t surprise anyone who’s noticed that some of our most innovative “curators” (and certainly some of the sharpest eyes for emerging art) are gallerists, who have to know how to put on a good show in order to survive. The art world and all its disparate local scenes certainly would be a far poorer landscape without younger and mid-tier galleries — I don’t think anyone would deny that — but the squeezing of galleries at that level mimics the disappearance of the middle class in this country. It calls for a resourcefulness and inventiveness on the part of the galleries that we haven’t fully grasped yet.

Great Article! It is time for thoughtful changes…I’ve been thinking of these very issues for the past 5 years, but realize for now brick and mortar with a strong online presence is working but do we need to update or change some of our models, I think so…ideas and time will tell.

Over the past ten years I’ve come around to this issue from the other end- I have a brick and mortar gallery, but I’m not interested in selling art. I let artists and itinierant art dealers use my space as a venue for exhibitions. What’s my place in this new ecology? I’ve found that I can’t divorce my space’s identity from the art that’s shown there- the public still equates place with style, much like a club gets known for the bands it books.

A gallery without a physical space is not a gallery at all — just another web site. It’s just another way to phase going out of business. I’ve seen it dozens of time in the D/FW area. You can sell art on-line if it’s cheap (Etsy) or high-end (the auction houses). Most of us are in the middle. . .

Let’s face it, it’s a bad business model. There are way to many artists and not enough art buyers. Not to mention most of the art is unsalable, amateur crap. Even in what I call “A level” galleries.