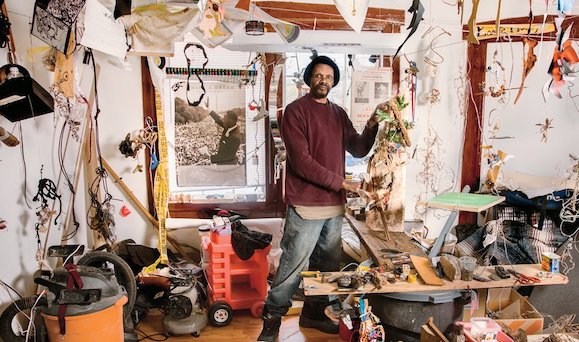 Dallas literary non-profit WordSpace has been hosting excellent writers, speakers, and musicians for a long time, and this Thursday, November 9, WordSpace and the Webb Gallery out of Waxahachie will co-present artist and vocalist Lonnie Holley at the South Dallas Cultural Center for an evening of music and conversation.

Holley, sometimes referred to as The Sand Man, (via WordSpace) “began making art at the age of twenty-nine. By that time, Holley, who grew up the seventh of twenty-seven children in Jim Crow-era Alabama, had been a gravedigger, a dishwasher at Disney World, pronounced brain-dead after a car accident, and once, as a very young child, been traded to a neighbor by his adopted guardian for a pint of whiskey.” His work is in major collections, including the High Museum and the American Folk Art Museum.

Holley began making music in 2006. “He recently appeared at the De Young Museum in San Francisco, and on December 2 he performs at Mass MOCA. He has toured and performed in the U.S. and Europe with such bands as Deerhunter, The War on Drugs, and Black Lips.”

In 2014, Mark Binelli in the New York Times wrote of Holley: “In terms of genre, Holley’s music is largely unclassifiable: haunting vocals accompanied by rudimentary keyboard effects, progressing without any traditional song structure — no choruses, chord changes or consistent melody whatsoever… . Backstage, only a few minutes before showtime, I learned that each of his pieces is actually a one-time performance; his words and music, whether in the studio or on a stage, are entirely improvised.”

Again, Holley’s performance is at the South Dallas Cultural Center this Thursday, Nov. 9, 2017, at 7:30 pm. For more on Holley and this event, please go here.