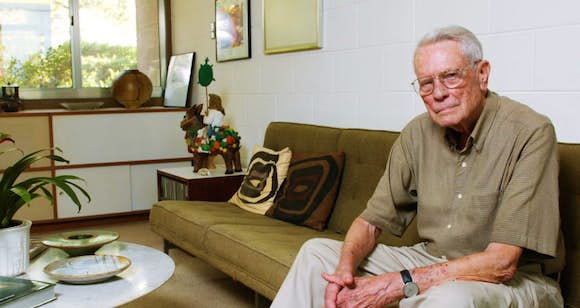 University of North Texas students, faculty and alum are well aware of the cultural role Voertman’s Bookstore has played in Denton for decades, especially its annual juried student art exhibition (the 57th annual iteration happened earlier this year) and its arts prizes, scholarships and gifts to UNT. Paul Voertman, the former owner (and son of the store’s founder, Roy Voertman, who opened the store in 1925) sold the store in 1990, and died in June at age 88, but the store continued some of art traditions stated by Paul Voertman, including the student show.

UNT announced earlier this week that “it will receive the largest bequest in its history” from Paul Voertman’s estate. The gift will go toward the colleges of Liberal Arts and Social Sciences, Music, and Visual Arts and Design. Via the Denton Record Chronicle: “The funds will primarily support scholarships and fellowships, as well as research and creative activities such as the Opera Production Fund.”

Voertman and his longtime partner, the late Richard Ardoin, “were extremely generous to UNT during their lifetimes, according to a UNT news release issued Tuesday. Ardoin, who died in 2002, made a significant estate gift to UNT that includes a charitable trust. With Voertman’s bequest, the couple’s combined giving to the university totals more than $15 million, making them UNT’s top donors.”