Jeff Kellar has taken his virtuosity to a new level with his current show at William Campbell Contemporary Art in Fort Worth. The painter and sculptor last showed at William Campbell in 2015, and his work at that time employed similar technique, but he’s clearly been pushing the physical limits of it in his recent works, and he’s also exploited more rhythmic patterns in recent compositions. Notable here is his attention to the balance of abstract geometric shapes as well as to levels of intensity of color.

His unusual choice of media is the most memorable element of his work. To achieve his color effects, he mixes clay with colored pigments and uses a binder of resin to attach layers of this material to an aluminum support. Sharply defined blocks of color are subtly differentiated, abutted or overlaid on aluminum panels that are floated on the walls. The medium he has chosen, with its smooth semi-matte surface quality, retains the soft, tactile characteristics of unfired clay slip. It’s not a typical paint media, and it makes all the difference.

It looks as though careful masking was employed to achieve sharply defined edges as different colors seamlessly abut each other in the two-dimensional space. He creates paper-thin layers of this medium that he builds up or overlaps as strips. The works in his Glimpse series are highly controlled collages composed of overlaid strips, both wide and narrow. Usually, he uses color selectively in thin strips that are an accent to wider sections of white or paler colors. In his previous exhibition at William Campbell, Kellar employed a fairly neutral color palette. In this show, a bolder color palette dominates, with strong reds, blues and yellows in contention and contrast to neutrals of black, white and gray. 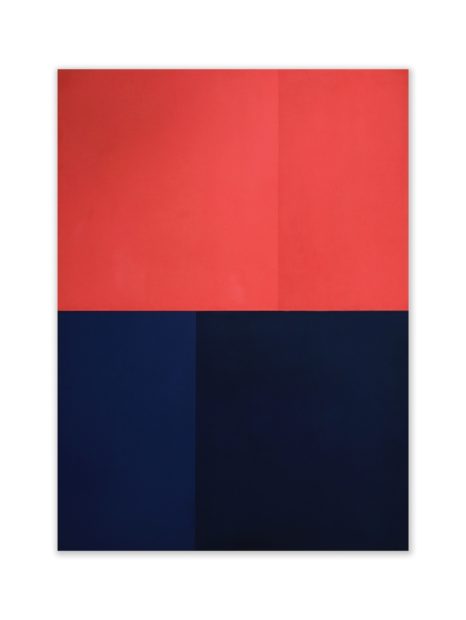 Reveal 2 is a diptych of two panels joined horizontally. The upper panel consists of two shades of red, while the lower panel contains a smaller rectangle of dark blue adjacent an even darker shade of almost blue-black on the right side. There is a subtle balance between the intensity of the colors and the relative size of the rectangles. 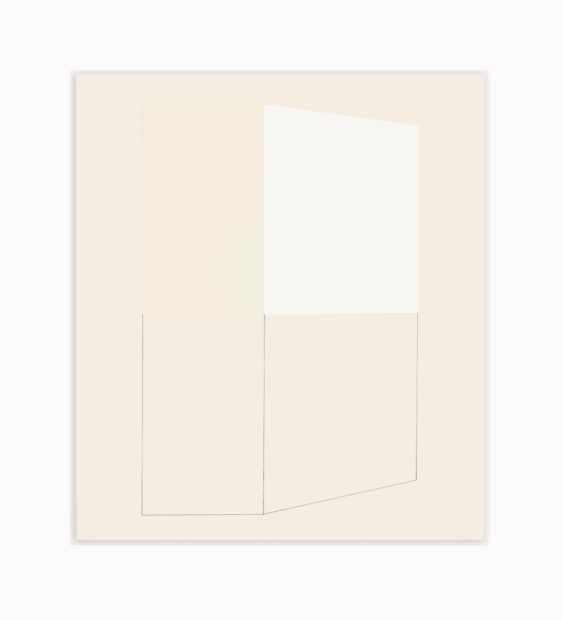 The bright white angular shape contrasts with the winter white and a yellow white in the remainder of this piece. The “drawing” seems to be a darker color on an underlying layer that forms an outline around the white forms layered above it. 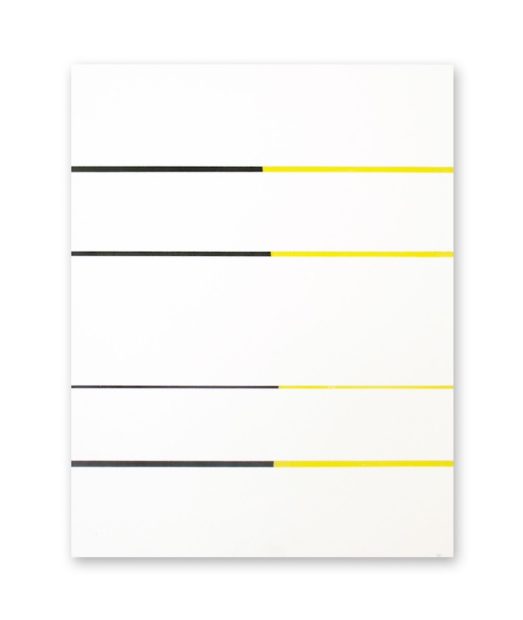 In Glimpse 8a, thin black and yellow strips meet each other as linear forms in the same layer, which is then overlaid with several wide strips of white pigment. The subtle changes in the width of these strips of color add rhythmic interest. 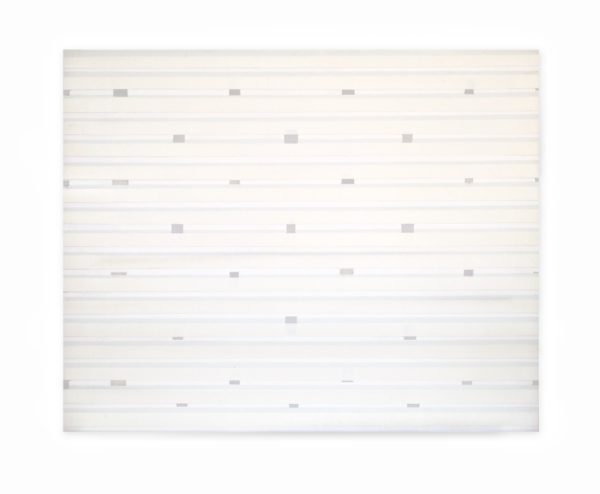 This complex collage contains three overlapping layers of resin, clay and pigment. The subtle colors include a background of white overlaid with blue tinted strips, then a yellow white with gray tabs on the top layer. 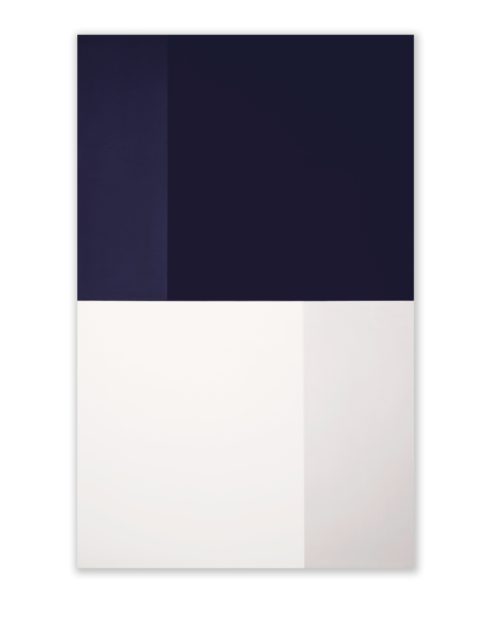 In Reveal 8, four colors — dark blue, black, off white and gray — are laid on two panels. The pieces in the Reveal series are deceptively simple abstractions, but display subtle balances of color and geometric form, as in Reveal 8’s shades of blue and white. 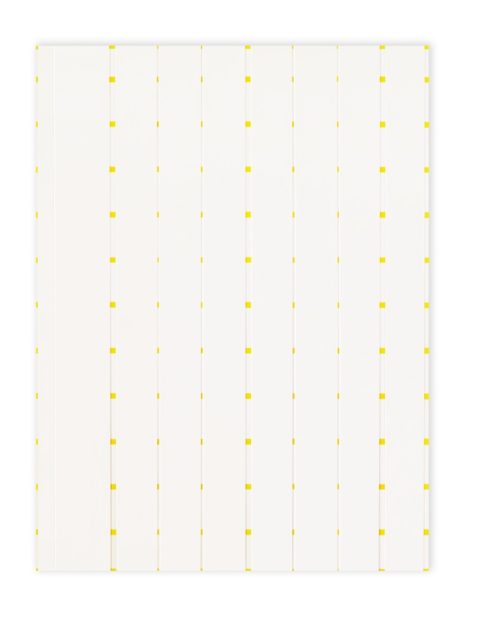 In this work in the Glimpse series, yellow strips are placed under white strips. When viewed close up, one can see the subtle relief and collage effects. From a distance, the spots of color punctuate the overall expanses of white in a serial manner. 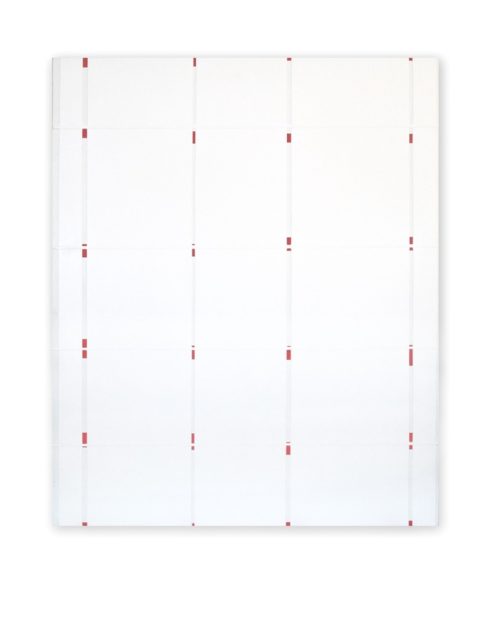 This work is more complex than Glimpse 19, and reminiscent of Mondrian’s rhythmic effects in his later works. Kellar lays an outer layer of thin strips of white color over wide white sections with horizontal red strips peeking out. The overall vertical pattern is nearly but not quite equidistant, and the varied widths of the stuttering, syncopated red marks animate the whole.

The sculptures here would make a rewarding show all by themselves. But when they’re combined with the paintings, an effective play of real and implied form ensues. Both of Kellar’s sculpture series have an ambiguous scale when seen in photographs, appearing large enough to be floor sculptures, even though their dimensions don’t exceed nine inches in any direction. 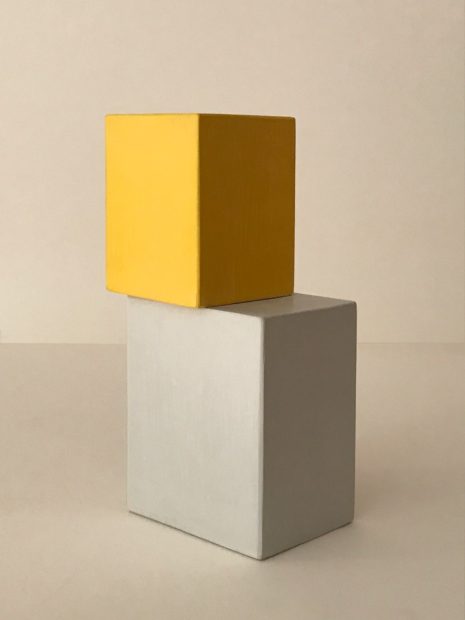 There are two sculpture series. The first is composed of colored blocks in varied sizes that appear to be stacked. They seem precariously balanced but they’re attached to each other. The sculpture’s wooden core is coated with layers of resin, clay and pigment like the two dimensional pieces, so the surface quality is similar. 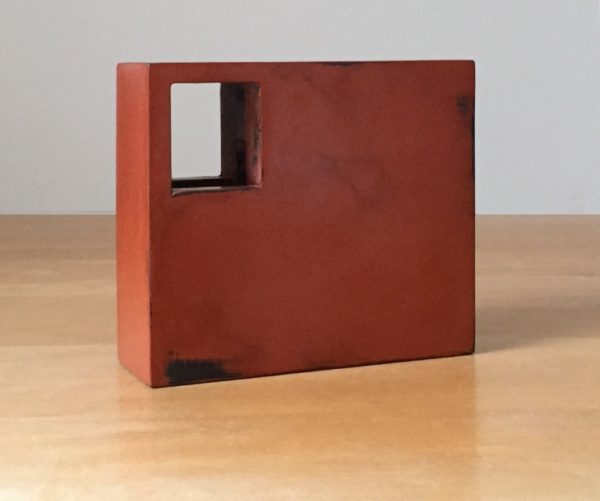 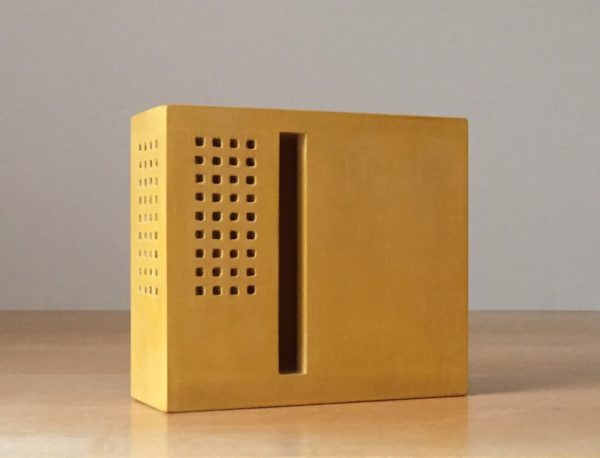 The other sculptural series includes hollow, nearly square box forms that have pierced geometric openings so that the interior can be glimpsed, giving them an architectural quality. Three of these boxes are included in the show, in single colors of black, red and yellow.

Two artists come to mind when viewing Kellar’s work — Josef Albers and his nuanced, systematic investigation of color relationships, and Mondrian, whose broad planes of white canvas are often defined by black strips and a delicate balance of bursts of primary colors. But Kellar’s abstract compositions are his own in their physical construction and use of media. Kellar’s mastery of his unusual technique, with its nuances of color and texture, make this an outstanding show that needs to be seen in person to be fully appreciated.