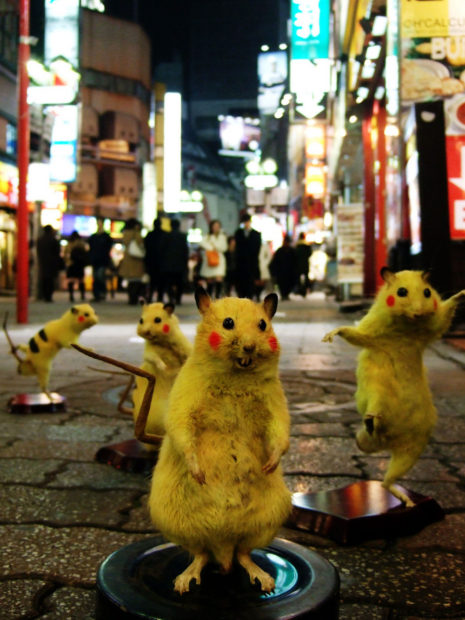 Rats and nuclear waste. I admit I have a soft spot for subversive, neo-Dadaist work. But it’s reductive to categorize these artists solely as enfants terribles of the Japanese art world as some art critics have done. Based in Tokyo,  Chim↑Pom is an artist collective featuring six artists whose work explores social themes of urbanization, governmental control and environmental hazards. Their methods are anything but traditional. Formed in 2005, they first came to attention with a work called Super Rat (2006). The title refers to a rat that is immune to poison, and the group went rat hunting with nets, and the rats were taxidermied and painted yellow to resemble the Pokémon character Pikachu. Referencing the resiliency of the Japanese people in the face of radioactive contamination, there’s also a sly nod to Takashi Murakami’s Superflat aesthetics. 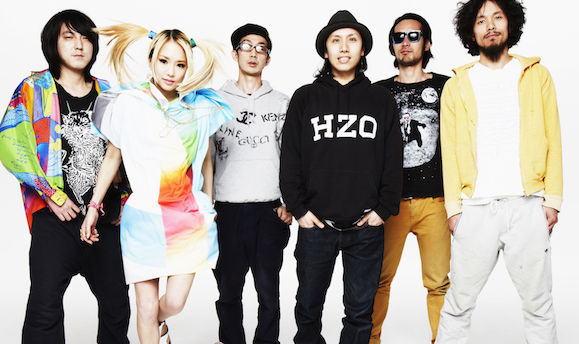 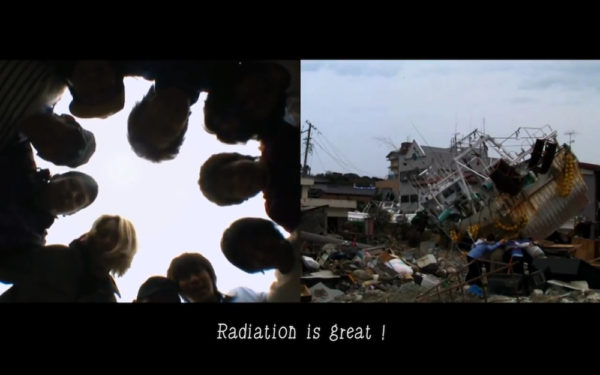 Chim↑Pom’s recent large-scale international project Don’t Follow the Wind (2015) is a collaboration with twelve artists including Ai Weiwei, Trevor Paglen and Taryn Simon. The artists created works inside a prohibited radioactive zone in Fukushima, Japan. (The site was evacuated after a nuclear meltdown of the TEPCO power plant.) The project is multi-faceted, with an actual exhibition closed to the public, a published catalog, and prolific video and photographic documentation. It took me a while to wrap my mind around the intentions and ramifications of the project. None of the artists hesitated to work in an area closed off to the public due to extreme high levels of radiation. Each artist or collective made work on site, creating a museum filled with objects that no other human will experience in person. It’s difficult to fathom that level of commitment to one’s art, and I don’t think that I would willingly take such a health risk, despite the importance of bringing awareness to the devastation of a large community, and lasting effects of a such toxic environment. 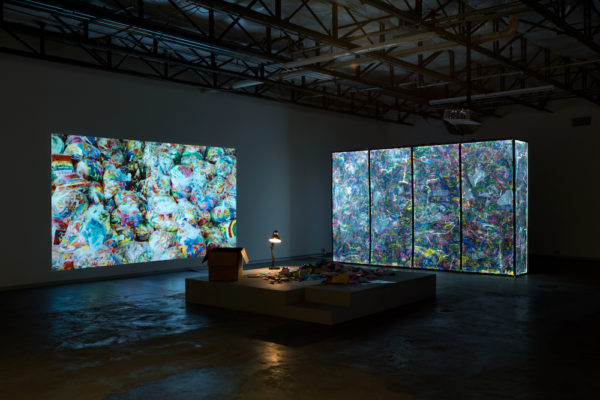 Currently on exhibit at the Dallas Contemporary are six of Chim↑Pom’s projects (including Super Rat and three works responding to the Fukishima event), as part of a larger exhibition of video, performance and installation artists from Asia.

The following is a 9/22/17 email interview between Dallas-based artist Colette Copeland and members of Chim↑Pom. It has been slightly edited for length and clarity.

Colette Copeland: Over the past twelve years, the collective’s work has expanded in terms of complexity, scale and risk in the projects. Although capturing rats does have its health risks, I look at the more recent project Don’t Follow the Wind, where all the artists were exposed to hazardous levels of radiation. That commitment and risk is challenging for many people to understand.  How has the focus of the collective evolved?

Chim↑Pom: I don’t think the focus of the collective has changed that much. Of course many things have happened and each time it has affected our style, but our obtuseness to risk, or our positive attitude towards taking risks has been something that hasn’t changed since we started our work.

Having a conservative attitude towards taking risks does not yield good results for us. At the same time, it’s not like we are completely fearless. The difference between Chim↑Pom and fearless activists is that we want people to see that we are constantly under risk and under that influence in our reality. There’s always risk to the act of living. And we consider ourselves to have learned from the great artists of the past that it’s interesting to expose your life under such fear of risk, and to show your vulnerable self. We don’t really realize that our projects are becoming more complex. Perhaps it’s because we have many members, and society is facing even more problems now. 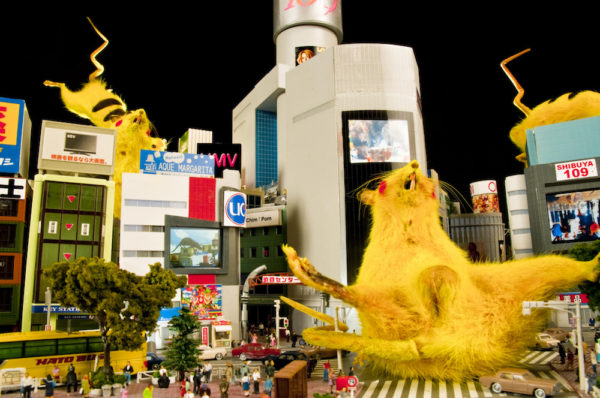 CC: As multidisciplinary artists engaging in a public social practice, what role/s does the media have in framing or contextualizing the work to both the public and the art world?

CP: We don’t really feel like the media has played a powerful role in contextualizing our work in an art historical sense. More than that, we’ve experienced many incidents when coverage led to a social debate on our works. Especially since art is the least prioritized topic in Japanese mass media, a kind of happening-type social practice is often published not in the culture section, but in the society section as a kind of one-time incident. For example, we have a piece that caused some controversy in Hiroshima, which really showed us how a newspaper’s simplistic and fragmented report could mobilize the people. The act that we took then was to publish a book with contributions from critics, activists, and other artists. It’s important for us to have a kind of practice where we keep our tense relationship with the mass media, and also show that we ourselves can become media as well. In art history, popularity and art has always had a complicated tense relationship.

CC: How does the collective navigate the experience for the viewer in regards to the shifting roles between passive viewer and/or active participant? Is that a consideration when creating the work?

CP: We don’t think about the audience that much when we are creating work. We almost consider it as irrelevant at the time. What’s more important is whether we are immersed in and excited by it. But when we present it, we almost exclusively think about the audience’s point of view. When that time comes around, we value active participants.

We became artists because we got hooked on art once upon a time, so we understand the feeling of people who actively participate in art. In that sense, we seem to be thinking about the audience but actually we may only be taking other people like us into account. However, we also understand the feeling of passive viewers since there is so much boring art in this world; many exhibitions are exhausting. We make art because we take pride in considering ourselves to be doing the most interesting work, so it’s quite unbearable to have it ignored as something boring.

CC: One article that I read said  Chim↑Pom is a slang term for penis. Why did you choose that as the collective’s name; what’s the backstory?

CP: It sounds similar [to a Japanese slang term for penis] but has a different meaning — or, Chim↑Pom itself doesn’t have any meaning to it. When we first formed, we were walking outside trying to come up with our name. A few minutes later, Ellie suddenly said, “Chim Pom!” Facing her extremely confident attitude, the male members of the group could not point out that it sounded like the slang for penis. Two years later, Ellie suddenly got mad and said, “Why do we have such a crude name!?” She’s quite the forgetful type and at that point we were starting to get recognized more by our name. We again held a meeting to change it. Again Ellie came up confidently with the name “desire,” which was another tough name to respond to, so we postponed this name-change meeting all the way to this day. Now we sincerely love the name Chim↑Pom, and it’s become pretty recognizable, too. Nowadays many Japanese people passionately discuss Chim↑Pom without making that penis association. 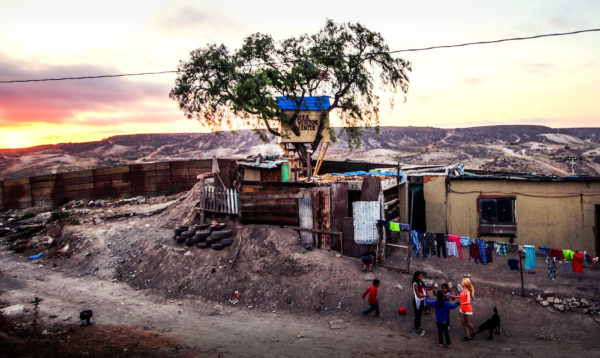 CC: What is the craziest or most memorable thing that has happened to the collective while working on a project?

CP: There are too many stories, and each member has a different one, so it’s hard to say.

When we did the project of flying over a garbage mountain in Bali with a helicopter, and littering from the sky by dropping a plastic garbage bag. This was prohibited by the Indonesian government. I convinced the helicopter company to fly over it by telling them for three straight days how this was my dream.

When we made work at the U.S.-Mexico border, one time I was peeping at the American side through the gap in the border wall. Someone from the other side was peeping as well and we stared at each other. It was fun.

When collective member Motomu Inaoka and I dressed as a man and a woman during the war and did a “banzai charge” at Disneyland’s Splash Mountain — it was raining that day, so we smeared the mud from the Disney plants onto our clothes and faces as make-up, and went on Splash Mountain over and over again.

At the Dallas Contemporary through December 17, 2017.