“Burning Man” and a Giant Naked Woman for DC’s Mall 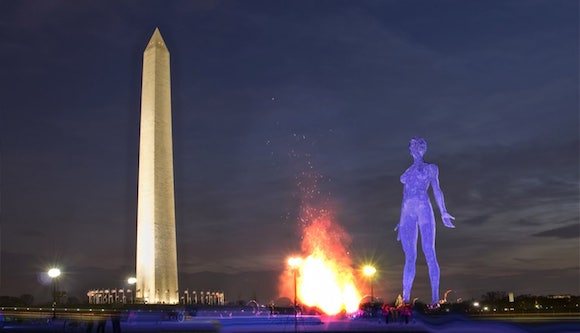 We’re sure the nation’s current administration would be thrilled to look out their office windows onto the National Mall and see a 45-foot tall, glowing, yoga-posed statue of a naked woman. If activists get their way, that’s exactly will would happen for four months starting in November as part of the annual, Burning-Man style Washington DC festival called Catharsis on the Mall.

The work, titled R-Evolution, is by artist Marco Cochrane. It debuted at Burning Man in Nevada in 2015 and has been in storage on the west coast since then. It weighs 16,000 pounds, and its base weighs another 16,000 pounds.

Via the Washington Post (paywall): “Mike Litterst, a spokesman for the National Park Service, said the agency is reviewing permits for the statue, adding that it’s ‘plausible’ that the agency would allow such a large and striking sculpture to remain through the winter months. Catharis organizers want the statue in place through March.”

According to those who want this $100,000 installation project to happen, the sculpture depicts “a strong woman feeling confident in her body.” It’s modeled on singer-dancer Deja Solis. This piece is one of three Cochrane has modeled on Solis and presented at Burning Man. Says Cochrane: “We need to show women just being in their bodies, just being humans, as an antidote of the constant sexualization of the women’s body, the constant dehumanization.”

If it goes forward, the piece would face the White House.