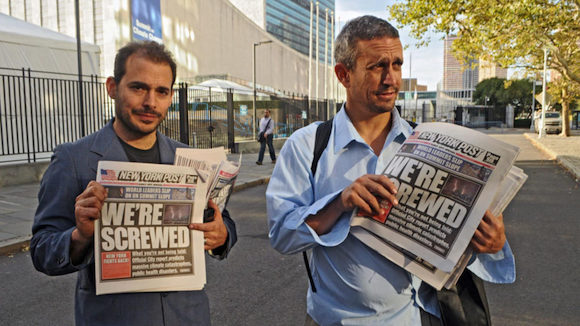 The Yes Men, collaborative artists and political activists Andy Bichlbaum and Mike Bonanno, are bringing their shenanigans to the University of Houston Cynthia Woods Mitchell Center for the Arts next week, September 19 at 7pm. The Mitchell Artist Lecture is a series of public programs that annually feature major figures in the world of artistic collaboration. The program is free, but tickets are required. Get online now.

For those unfamiliar with The Yes Men’s work, here is the Mitchell Center’s description:

The Yes Men have gained international notoriety for impersonating big businesses on international TV and conferences around the world for nearly two decades. They describe what they do as “Identity Correction.” Unlike Identity Theft, which criminals practice with dishonest intent, Identity Correction is the art of impersonating a powerful criminal to publicly humiliate them for conspiring against the public good. By impersonating leaders and big corporations who put profits ahead of everything else, The Yes Men publicly humiliate them and expose their criminal practices. They’ve made three award-winning feature films about their actions.

And here’s the trailer for one of their films: