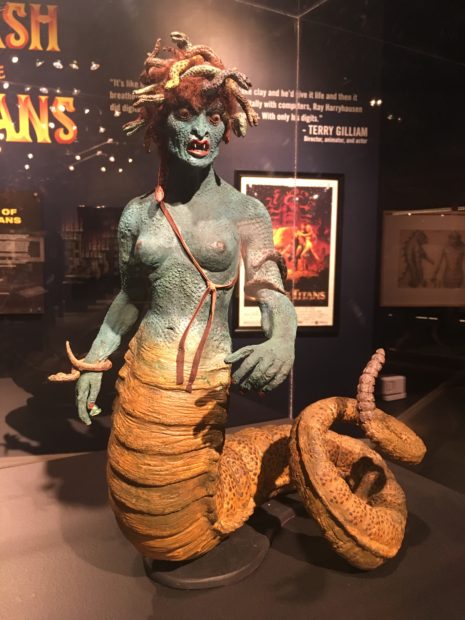 Medusa from Clash of the Titans, 1981

When I was a little kid, the movies featuring Ray Harryhausen’s stop-motion creatures would show up on UHF channels on the weekends — Jason and the Argonauts, The Golden Voyage of Sinbad, et. al. — and one of my older brothers really liked them, so I was indoctrinated to ‘Dynamation’ pretty early. I loved those monsters and animals, far more than I cared about any of the human actors or the plot. I just sat there on the orange shag carpet right in front of the TV and waited for the next scene when a Harryhausen creation would jerk and amble into the action to make trouble. I wished it would jerk and amble into my living room so I could meet it. The way these animated creatures interacted with live actors made this seem possible in a way, unlike, say, the stop-motion Rankin and Bass reindeer and snowmen who lived in an entirely animated world. 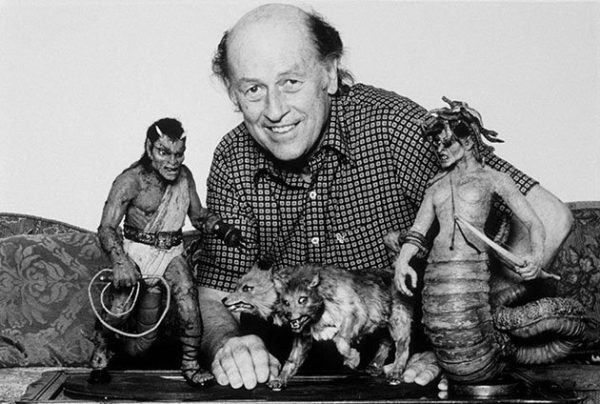 Harryhausen’s special effects work, from his estate (he died in 2013) is on show at Science Museum Oklahoma in Oklahoma City the right now, and a few days ago I drove up to see it. I still love the idea of a person who pioneers a distinctive thing, very much of his time, that’s as indelible as it is doomed. Dynamation was Harryhausen’s solution to the problem of having made-from-scratch creatures (not actors in costumes, a la Godzilla) invade live-action space. The museum show is made up of his actual models, his original drawings, storyboards, movie clips, and a clear explanation of his process, laid out pretty much chronologically. It took all of two minutes after entering to feel like a little kid again. 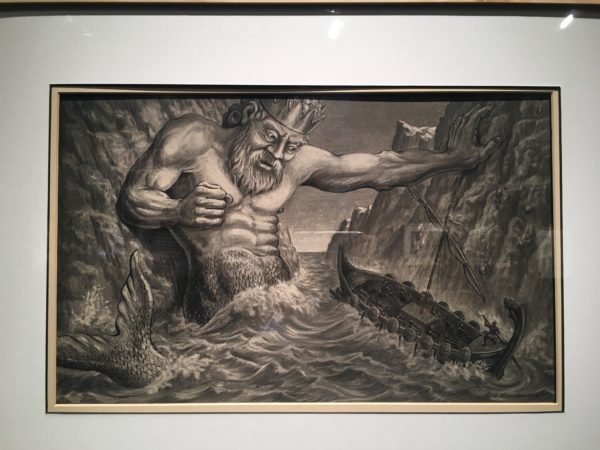 Pre-prodcution drawing from Jason and the Argonauts, 1963

This is not going to turn into a rant about the aesthetic shortcomings of the film industry’s more recent CGI shenanigans. Harryhausen, who pioneered his technique in the late 1950s, had a good run, but like a lot of time-and-place specific inventions, his contribution had a terminal life. By 1981, when his late-entry Clash of the Titans came out, it seemed pretty clear that the rest of Hollywood and other genre filmmakers were not going to co-opt Harryhausen’s technique to make it an industry standard, despite that movie’s commercial success. In that sense, Harryhausen’s efforts retain a kind of permanent and singular nostalgia for people who loved the movies back when they came out, or who see them for the first time now, at age nine. Fans of Harryhausen’s stop-motion include most of the established action/sci-fi/fantasy movie makers, and some directors, like Tim Burton and Wes Anderson, have made their own stop-motion films with a clear affection for Harryhausen. 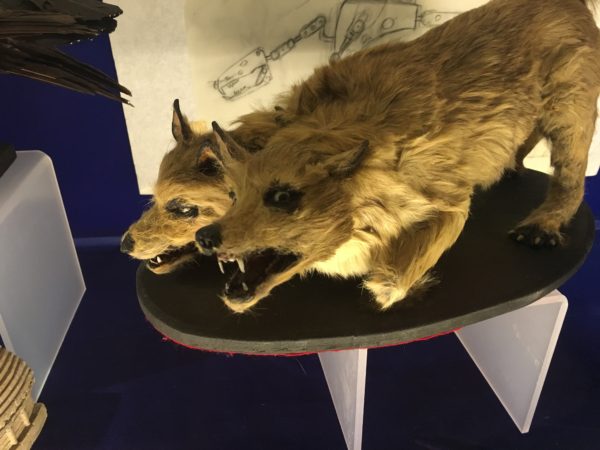 Dioskilos, from Clash of the Titans, 1981

But stop-motion is visually indulgent and dramatic and demanding; it’s rich and clunky, and it was nearly archaic on arrival. Most viewers don’t want to revel in it all the time, and it wouldn’t work for a lot of movies’ special effects needs, especially live action, because it’s too distinctive, and too tactile and physical while being somewhat hallucinatory. It’s trippy and campy. It’s also, visually, very satisfying. It seems almost custom-made for both adolescents and late-night stoners. But it’s also charming and disarming. It’s never too scary; it may be impossible to make a Dynamation monster that on its own would deserve an R or NC-17 rating. But because his creations were physical things that occupy real space, they sustain a presence that a lot of current CGI simply can’t. Harryhausen’s two-headed wolf looks furry onscreen, because the jointed model he made has actual fur, not a computer-generated (uncanny valley) facsimile of fur. 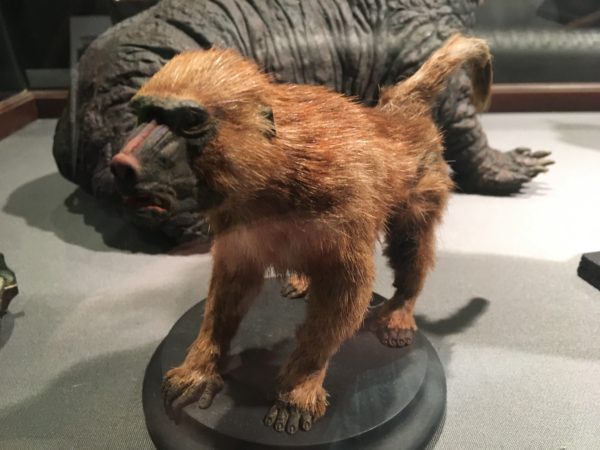 The baboon-prince from Sinbad and the Eye of the Tiger, 1977

Harryhausen was born in Los Angeles, but spent the bulk of his career living and working in England, outside of the Hollywood system. He made most of his movies with producer Charles Schneer, and was a genuine sci-fi and fantasy enthusiast (Ray Bradbury was one of his longtime closest friends), and he was always very involved in the movies’ conception and pre-production. I recently read an interview with Tim Burton about Burton’s own ill-fated post-film-school stint as an animator with Disney, and he said that being a full-time animator required using two sides of your brain at the same time — to be as patient as you are creative. That’s a rare combination. Of Harryhausen, Burton says he “was always a singular artist. It was like he was an actor; he was like the character. There was a personal feeling about the medium and the way he sort of infused it that made it a strong, visceral experience. The way all the monsters died, there was just a real sense of emotion in there that was really interesting.” 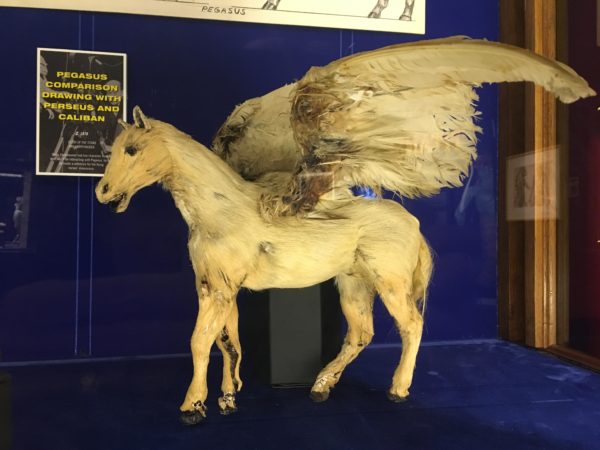 Pegasus from Clash of the Titans, 1981 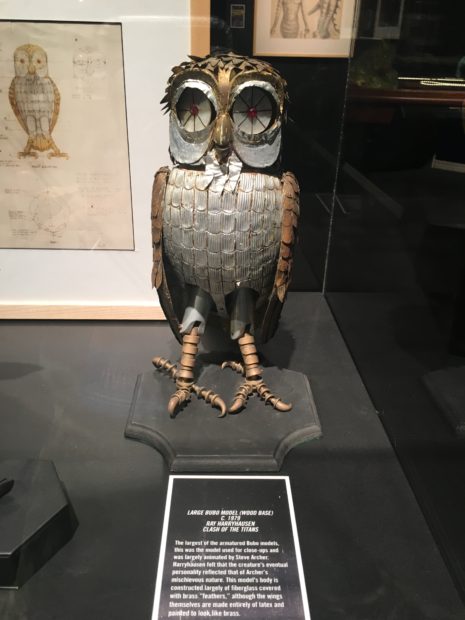 Bubo the mechanical owl from Clash of the Titans, 1981 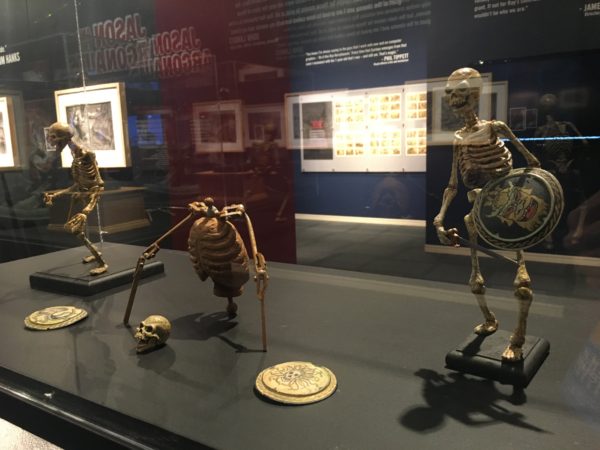 Skeletons from Jason and the Argonauts, 1963

I felt incredibly gratified to see Harryhausen’s kraken and Medusa and Pegusus in person, and, as nostalgia’s double edge is prone to deliver, a little shaken. The models are smaller than I thought they’d be, and a few are a bit roughed-up and moth-eaten. To be fair, Jason and the Argonauts, Harryhausen’s first full-length color feature with its famous (and influential) skeleton battle, is more than 50 years old. But this small gem of a museum show flows smoothly and has the hallmark memorabilia reverence reserved for beloved “movie magic” movies. I think it would appeal to a pretty wide audience — from the die-hard genre-movie buffs who populate Comic-Con to casual viewers who can appreciate how singular Harryhausen’s aesthetic is. 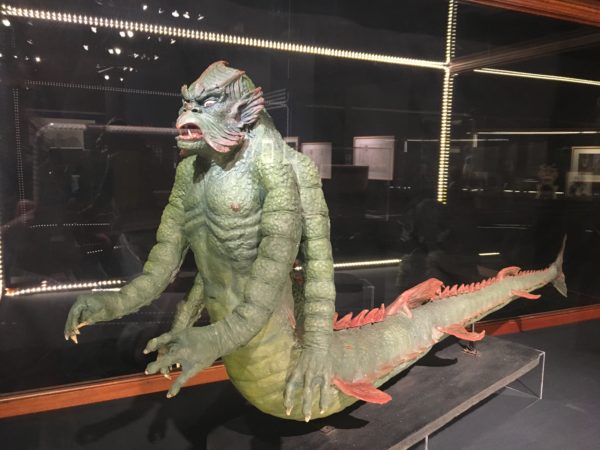 The kraken from Clash of the Titans, 1981

When I got home, I called my brother. I wanted to know if what drew him to these movies originally was the dramatic live-action hero stuff, or Harryhausen’s creatures. “Oh, the creatures and monsters for sure,” he said. “There was nothing like it. These were our monster movies, made for us, at that time.” He says he and his three kids, who are elementary school-age, watched Clash of the Titans about two years ago. And they play-act the kraken scene around the house regularly, to this day. “They loved it. We still love it.”