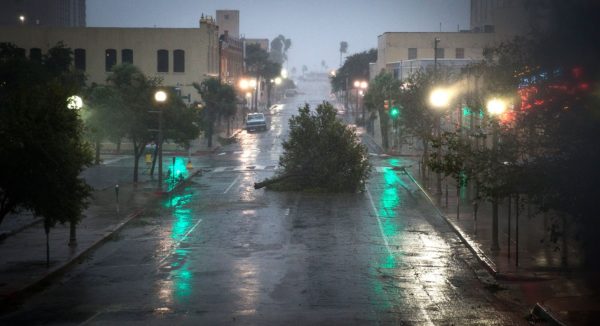 Christina Rees: It’s Saturday at noon. I’m up here in Dallas; you’re hunkered down in Houston. Please give me a report. How are you? What’s going on?

Rainey Knudson: We’re fine here. We had heavy rain overnight and this morning, but nothing out of the ordinary by Houston standards.

I spoke to our news editor Paula Newton, who lived in Rockport for a couple of years recently. She said it’s devastated. She still owns a house there and has no idea if it’s even still up. They closed the bridge into town, so it’s difficult to get in to see. I hope those people are okay.

Here in Houston we’re well north of the major hurricane action. The wind wasn’t bad, so I think a lot of people here, myself included, are in a weird fugue state right now. This week was nuts in the grocery stores and trying to find gas, and now everyone’s holed up with their stash of food, water and booze, and just sitting on Facebook. You get the extremes: one minute you’re seriously contemplating how long you can survive on what’s in your house, and the next you’re chuckling over posts online about who bought the most beer.

CR: I’m sticking pretty close to FB and phone texts, too, to see how everyone is doing. A lot of check-ins from Houston, and I know some people from the coast who evacuated to Austin and DFW. But it’s not supposed to get really bad in Houston until, when? Tonight and tomorrow. And that’s about flooding and no electricity.

In the meantime we’ll get more news and images in from Corpus, etc. You’ve been trying to get some news from the art institutions and museums in the region.

RK: Yes. Rockport Art Center closed earlier this week. I’ve reached out to Luis Puron, the director, but I don’t know whether he knows if there’s any damage. Art Museum of South Texas (in Corpus Christi) said they would reopen Monday, “or as soon as possible.” Of course, everything in Houston was cancelled, even though nothing much has happened here yet.

People in the region are worried that if the rains continue this week, we could have catastrophic flooding. There are neighborhoods in Houston that have been flooded badly twice in the past two years, and that will likely happen again. I can’t imagine those poor people who’ve had to redo their sheetrock and their floors twice already. What they’ve lost.

CR: As of right now, none of the news looks good for you.

How do the art spaces hold up in the kind of flooding Houston gets? And what about the artists and their own work, in storage, in studios? I suppose with each flood, new contingencies are established. 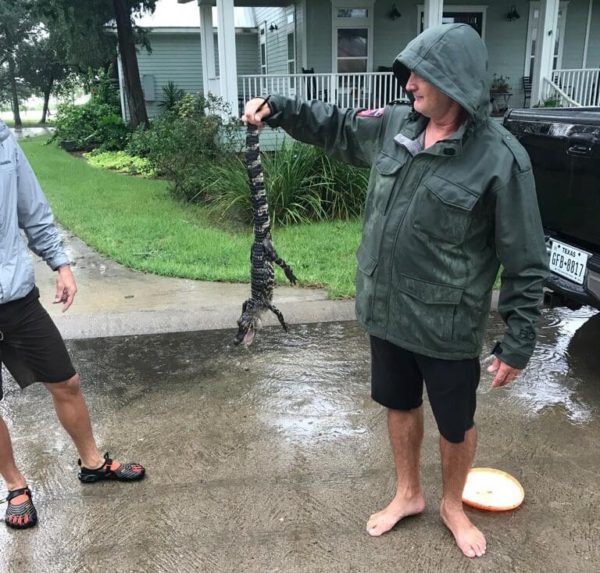 The gators are coming out. [Image via Space City Weather]

RK: That’s true, but you have to account for the influx of new artists, and for the loss of institutional memory. A lot of artists living in Houston right now weren’t here for Tropical Storm Allison, in 2001 (our annus horribilis: the storm, Enron, and 9/11 all in the same year). There were parts of Houston that got 36 inches in 24 hours during that storm, which far exceeds anything they’re predicting for Harvey.

Allison was truly catastrophic. I’m not sure whether the Brown Auditorium at MFAH flooded (I know it did during Hurricane Alicia in ’83). The CAMH’s basement was flooded, for the second time. The symphony lost a ton of sheet music and archives; the opera lost costumes, and the medical center lost thousands of lab animals that were kept underground.

But people forget. I have to wonder what Dominique de Menil would think about the fact that the Menil’s new Drawing Center (whose opening was postponed this summer, unrelated to this storm), has all its storage underground. Priceless drawings stored underground, in a swamp! Mrs. de Menil famously lost a lot of stuff in a flood at Sewell Hall at Rice University. The story goes, that’s why the storage “treasure rooms” at the Menil Collection are all on the top of the building.

There is something to the local eyerolling over museums bringing in starchitects who insist on basements with ramps leading down to them (in the case of the CAMH) or air intake right inside the windows (Mies van der Rohe addition at the MFAH), or underground storage (Menil), all of which are vulnerable to flooding. Which we tend to get around here. 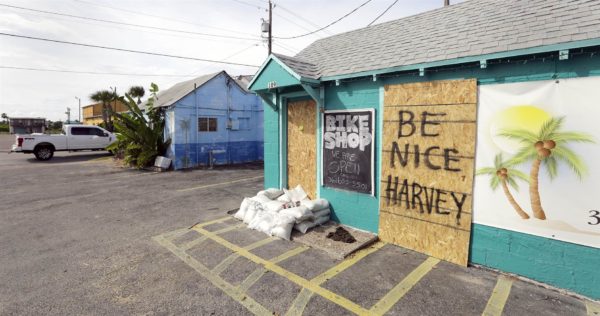 Do you remember this?
https://glasstire.com/2015/05/27/are-you-a-houston-artist-or-org-who-needs-help-due-to-recent-flooding/

and then this, where I personally got a taste of what Texas flooding can feel like, and how easily our worlds can shut down:
https://glasstire.com/2015/11/04/blackout/

Obviously, things are not getting better, or easier, weather wise, across Texas (or anywhere really). Weather events are getting worse and more frequent. Artnet recently ran an item about coastal museums and flooding. It included this:

“’When I worked on Guggenheim Bilbao, we all mocked the requirement to accommodate the 100-year storm,’ says Andy Klemmer, the founder of the Paratus Group, which manages the construction of cultural projects around the world. ‘Since then, 100-year storms seem to come along every five years… Every project we work on now tries to predict the worst-case scenario and to accommodate it.’”

“Most experts agree that these kinds of concerns, barely discussed five or 10 years ago, are steadily making their way to the top of decision-makers’ minds. ‘Everyone, even the conservative board members who decry climate change, want their investment protected from its effects,’ Andy Klemmer says.”

RK: Oh yeah. Glasstire has been around over 16 years now. We’ve been through some disasters, including 9/11.

There were several Houston artists whose studios were completely flooded, like 5+ feet of water, during Allison. They lost all their work. Devastating. (And by the way, if anyone reading this thinks that sounds like a refreshing clean slate, you should stop what you’re doing right now, go buy “The Life-Changing Magic of Tidying Up,” and start throwing shit out. Because maybe you need a clean slate.)

Assuming that one of the basic tenets of climate change is true — that weather is getting more extreme, which it certainly seems to be — then art institutions (to say nothing of Internet servers and Norweigan seed vaults) have to get way more proactive, and spend way more money, to keep their goodies safe. I wonder how many museums really have their act together. Even when we’ve been through a natural disaster, we take these objects for granted. There will never be a world without the MFAH’s Rembrandt, right? I would hate to live in a world without the contents of the Metropolitan Museum.

I always think about the great fire in the Alexandria library. What was lost? We’ll never know.

But on the subject of tidying up, when you consider what was lost from Chelsea galleries during Hurricane Sandy, I wonder seriously how much of it was a tragedy, and how much of it was saving the world from more decorative, overpriced, art-fair art.

Oh well. Human nature is to enjoy the drama of the event without getting serious about it until one is absolutely forced to. Hence the Facebook jokes. The artist Michael Bise warned me not to be blasé about this storm. He said “get whatever you care about off the floor.”

CR: And yet Micheal Bise just texted me his own visual joke about the storm. But he’s right. I love the levity coming out of Houstonians right now, but I think many Houstonians and people along our coast understand how bad it can get.

But our big cities, where most of the art and artists are, have been built up in the last two decades — I mean infrastructure and development — in ways that don’t account for water. Whatever one’s take on climate change, the fact is that in Dallas and Houston, et al, there’s simply no where for the water to GO anymore. So neighborhoods that never flooded are flooding.

I’ve seen way more flash flooding up here lately (and been caught in it, which really is terrifying), and when I’ve been down in Houston I’ve gotten stuck staying days longer than planned because of massive rains. So I worry that no matter how careful artists and institutions and galleries are about protecting the art, they’re fighting a losing battle. 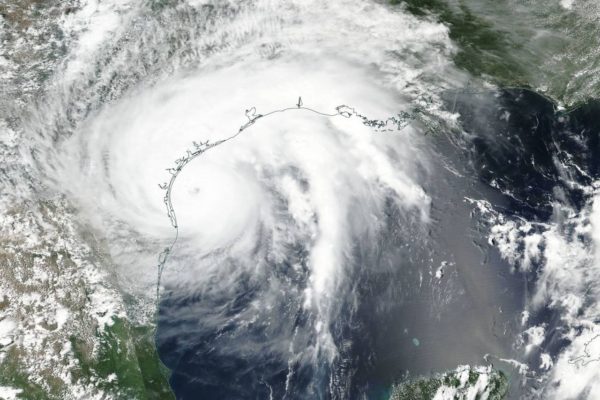 RK:  Well, that might be putting it a TAD too dramatically. There is a whole lot of art in Texas that is going to survive Hurricane Harvey. Most of it, in fact. I bet far more artworks get destroyed by humidity and silverfish than by hurricanes in this state.

I do wonder how the Corpus Christi museum is doing. They had five days at most to get ready for this. I love the original building by Phillip Johnson — now there’s a museum built to withstand a hurricane. It’s like a German bunker. And they are right on the water.

And as I type, a tornado warning just went off on my phone.

I didn’t mean that Harvey would destroy All The Art. I mean that weather-related damage to our cities will hurt a lot of art in the coming years. Up in New York in 2012 Hurricane Sandy dumped 30 feet of water into the new Whitney’s basement. The Morgan Library had a gutter and drainage system that recently had to be revamped because the city was getting way more rainfall than the city’s historic “maximum.”

Tornado, huh? Now that I can get my head around.

Also, this, from the Columbia Journalism Review:

THE TEXAS TRIBUNE AND PROPUBLICA last year published a multi-part investigation looking at what would happen if Houston was hit by a major hurricane.

The reporters partnered with scientists at several universities in Texas to conduct simulations, gaming out various storm scenarios for the country’s fourth-largest city, with its rapidly growing population, huge stores of oil and natural gas, and a major NASA facility.

The conclusion: The city and region were woefully unprepared for a major hurricane, with inadequate infrastructure for evacuation and flood control. A major storm would inflict catastrophic damage, bringing “economic and ecological disaster.” The series won awards, including a Peabody and an Edward R. Murrow, but it didn’t lead to substantive policy changes or big new investments in infrastructure.

RK: Space City Weather is an interesting phenomenon of Harvey. Lots of people suddenly seem to be reading it. The site takes basic NOAA/National Hurricane Center data and weaves it into a relatively dispassionate narrative. I’m glad that people are reading it rather than watching the rabble-rousing hysteria of The Weather Channel.

The tornado warning was just that. I feel a little stupid: so far in my corner of Houston, all we’ve had so far is a run-of-the-mill downpour. It’s been a fizzle, although everyone seems to be taking the opportunity to treat it like Christmas and do nothing. Storms are fun… when they’re little more than an excuse for a long weekend.

Rain’s picking up. I haven’t been able to get any information still on the art spaces in Rockport and Corpus Christi. Hopefully we’ll hear from them soon.

It has rained all night. White Oak Bayou (the closest bayou to us) has crested its banks. We’re fine, but water is coming into the houses of family and friends who live closer to the water. Elsewhere in the city, many people’s homes are flooded (including some artists I saw on FB) and apparently 911 is at capacity. NOAA has a quadruple flood warning in effect. 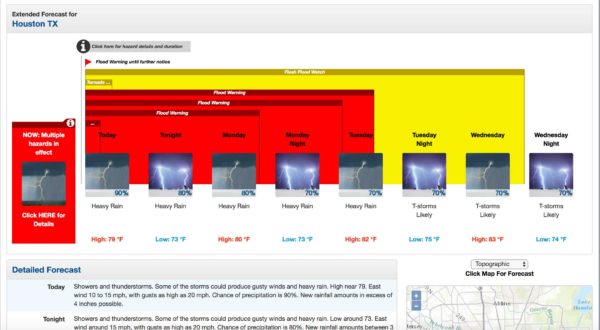