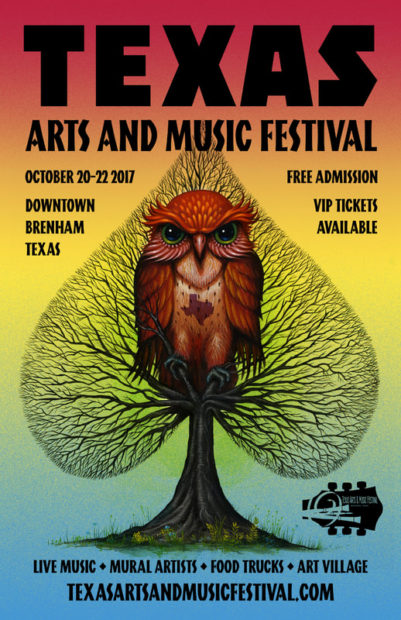 The Texas Arts & Music Festival, entering its second year, has announced the three muralists who will take on some really BIG-wall real estate in downtown Brenham this October as the art part of its programming. (Brenham is about halfway between Austin and Houston.)

Last year’s festival murals were a hit, and the works are popular with both locals and tourists. The 2016 artists were Tra Slaughter, Empyre, Patrick Medrano, David Hardaker, and Skeez 181 with Doug Cason.

According to KWIH.com, “The city of Brenham and Brenham Community Development Corporation accepted a master plan in 2011 that designated an area south of the main square as an Arts and Theater District. The festival aims to revitalize the area and create a space for public art on the walls of Brenham’s downtown buildings of more joyful and colorful images that make the area an attraction for visitors.”

Texas Arts & Music Festival will be held in downtown historic Brenham, Tex. on October 20, 21 and 22. For more on this story, go here. For info and tickets on the festival, go here.

Jeff Soto will also be doing a free lecture on Blinn Campus in Brenham on October 19th at 7pm. The talk is in the student center.
Soto will be in town all weekend painting his mural, alongside Michael C. Rodriguez and Daniel Anguilu of Houston. Pop up art galleries will abound while free, live music and craft beer surround the area starting October 20th-22.