Diana Thater: ‘The Starry Messenger’ at the Moody Center 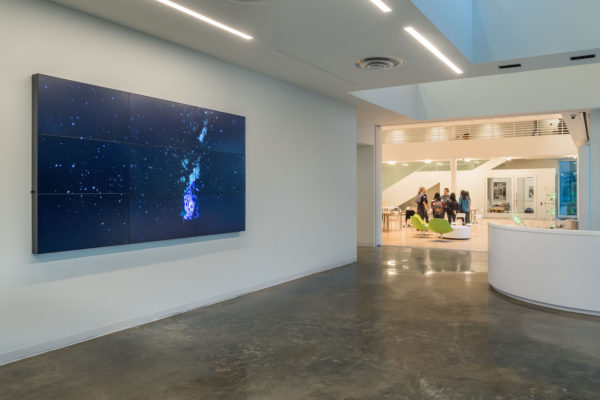 I was lying on the ground one night at an artist residency in rural Pennsylvania. There were no clouds, no smog —I’ve never seen so many stars receding into infinity. The sky was so clear and the night so crisp that it was easy to make out a clear outline of the Milky Way. It wasn’t how we normally see it in science textbooks or NASA posters; I was looking at the Milky Way turned on its side. It looked like a dense, fat, pixelated line — like a tail that, in one whisk, could fling us out into deep space — a place capable of immense obliteration and violence, a place of silence and timelessness. It felt immersive and very far away. It was majestic.

Diana Thater’s The Starry Messenger (2014), currently on view at the Moody Center at Rice University, is not that.

Nor does she want it to be. Thater is instead using the act of stargazing as a seduction technique, to entangle us in a piece that interrogates our human need to separate ourselves from a fetishized “nature,” one that cultivates frustration and desire, and that challenges us to be bored. She does this by layering our experience of her piece: the meta-mediated experience of Thater’s recording of a projection of the Milky Way inside a planetarium; the mediated experience of her filming the projector inside the planetarium, and the immediacy of us viewing it all through a nine-monitor grid.

There’s a deeply meditative aspect to stargazing that The Starry Messenger has retained, but has also seriously and purposefully distorted. Here the act of looking diverts from, say, the repetitive serenity of an Agnes Martin painting. Nor does it bear the existential weight of a Rothko. It instead throws us into a kind of visual yoga: like a Warrior Two pose that requires us to remain calm as pain and lactic acid sear through our quadriceps, we are meant to sit through this piece with the acknowledgement and acceptance of discomfort.

That’s because as straightforward and banal as this work is, there’s a great deal of cacophony going on here. The twice-removed view of these stars is dimmed, deadened, fuzzy, and frustrating. Our eyes are constantly trying to course-correct, trying to make them brighter or crisper — making them the idea of what we think they are supposed to be. This competes with the much cleaner filming of the projector, which acts as the work’s mechanical sci-fi protagonist. Floating near the bottom right corner, the projector acts as an out-of-context anthropomorphized character that sometimes looks like a spherical submarine, sometimes like a weird alien space technology, sometimes like a pot-holed face. But on top all of that lies the veneer of the nine-monitor format as gridded lines slice through the visuals, swallowing up and spitting out small stars as they traverse off of one monitor and onto another. Our desire to fix the stars competes with our desire to characterize the projector, which competes with our desire to chop the whole thing up and contain it in nice little squares. It’s dizzying and dense, strangely erotic, and mildly exhausting. It gave me a headache.

The crux of this work is the conflicting phenomenological experiences it extracts from the viewer. Unfortunately, it’s undercut by its curatorial placement within the Moody Center. The Starry Messenger is installed in a foyer where it’s reduced to conceptually easy wallpaper. After all, there’s no narrative arc; it’s a work that someone could theoretically spend three seconds with and get its point. Its position opposite a large window creates an equally resplendent and appropriately gray gradient glare that both distracts from the film and enhances the contrast between the surface of the monitors and their deep-black gridded outlines.

But this work needs time, and between it sitting in the foyer and having David Scanavino’s Repeater (2017) peaking its head out from around the corner, it’s being cut off at the knees. Perhaps they should black out the windows and have it switch places with teamLab’s interactive installation in the Media Arts Gallery. Their Flowers & People, Cannot Be Controlled but Live Together—A Whole Year Per Hour (2017) is a spectacle; The Starry Messenger is difficult. The Moody Center should have the audacity to require more discipline from its viewers.

I spent a full hour with it, but it needs at least twenty minutes. So pull up a swivel chair, ignore the passersby, grab some Advil, and watch.

On view at the Moody Center for the Arts at Rice University in Houston until February 3, 2018.

State of the Arts: Rice vs. UH