You Should Go To Mexico City

It’s surprising how many people I know haven’t been there.

Even in the American art world, which is increasingly connected to Mexico because of its thriving art scene, its successful art fairs, and the general surge of interest in Latin American art over the past couple of decades, there are still people who don’t go — despite the fact that the US Department of State does not have a travel advisory in effect for Mexico City, despite the fact that most people who visit rave about the experience. 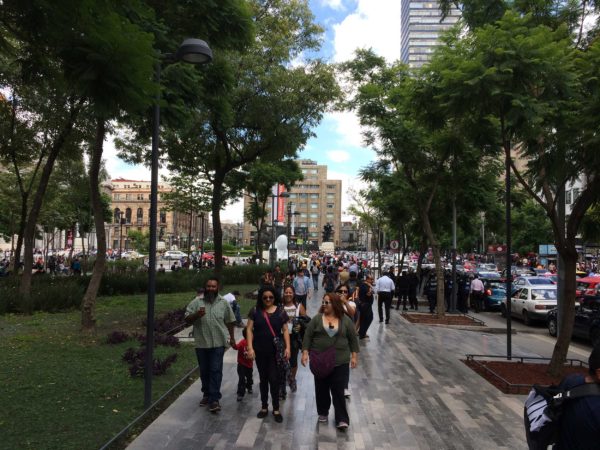 Saturday in the Centro

It’s astonishingly easy to be an American living close to the border and still not have much of a grasp of the authentic Mexico. I grew up in Texas. Until I spent a year in Monterrey during graduate school, I had only visited Mexico once (to Tijuana, which like all the cities hugging both sides of the border only sort-of counts).

I think the reason many Americans hesitate to visit Mexico is because of our uneasy sense that it at least partly represents the dark price we pay for our prosperity. Our economic dominance and our easy, cheap conveniences and our terrible addictions have a global impact that’s not entirely salubrious, and our neighbor to the south shoulders no small part of that burden, fairly or not. 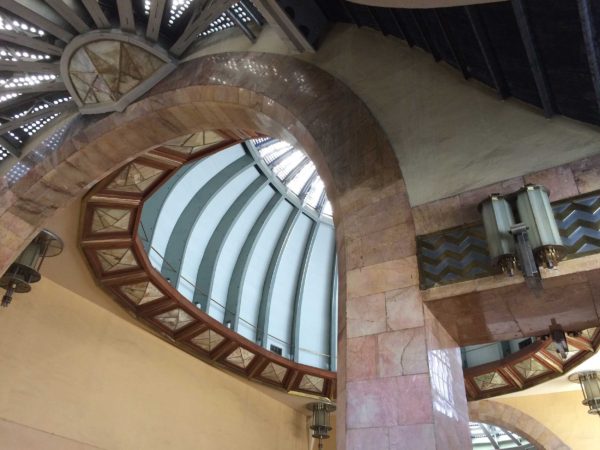 But like Texas, Mexico City is far more interesting, nuanced and robust than its stereotype. This has everything to do with the individuals who inhabit it. They have a deep, fascinating history and the architecture to match. Their culture is colorful, gracious and hospitable. And the food is insane. 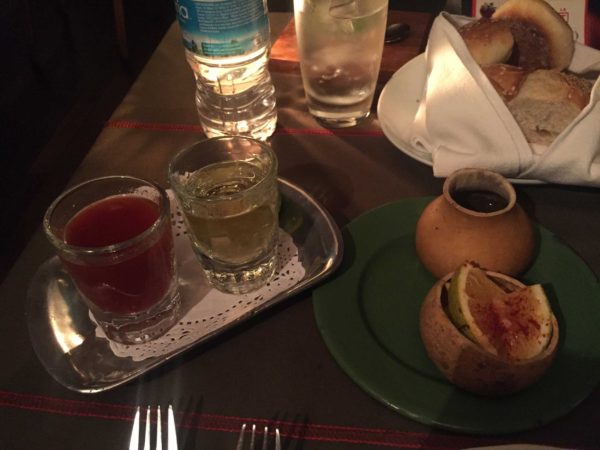 Sure, there are parts of Mexico City that feel like they could use a good scrubbing. Sure, you should keep your wits about you, but no more so than in Buenos Aires, Kathmandu, or Johannesburg. Spend a little time and energy preparing for a trip — the same you would put into a visit to Prague or Beijing — and you will have a sensational time.

For Texans, it should be an obvious destination: a short flight gets you to a huge, exotic, affordable, cosmopolitan capital that’s in the same time zone. It’s right there. Our neighbors. 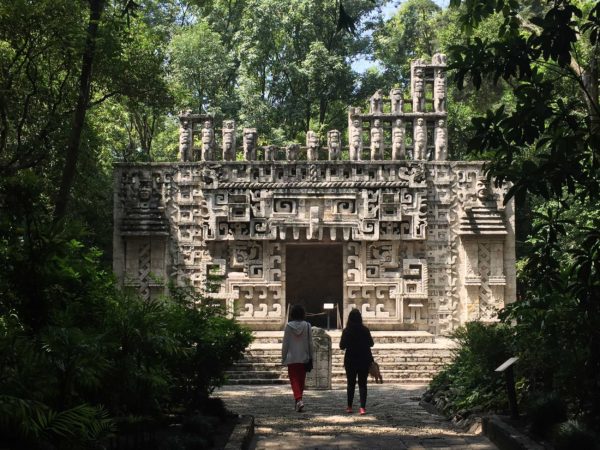 One of the gardens in the Museo Nacional de Antropología

If you need an excuse, go for the Zona Maco contemporary art fair in February (and its edgier sister fair, Material). Houston art consultant Julie Kinzelman reported that Zona Maco was a far cry from the rat race of Miami Basel: “They had more generous booth sizes; it was all really well thought out. It was a lovely experience, and much more civil. Very posh and sophisticated.” 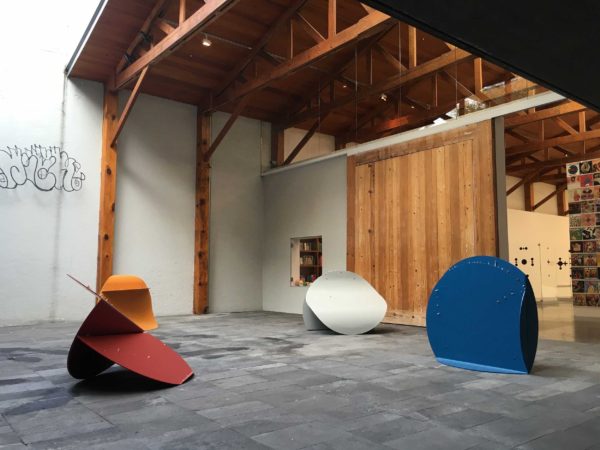 Like all old cities, Mexico City is a study in contrasts. Here, their Baroque cathedral, which is the oldest and largest in all of Latin America: 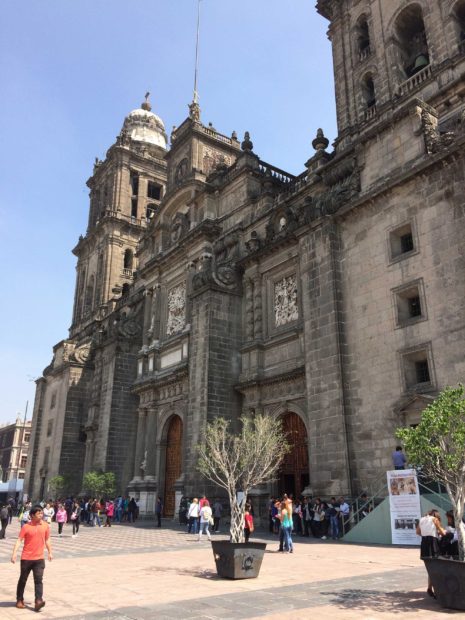 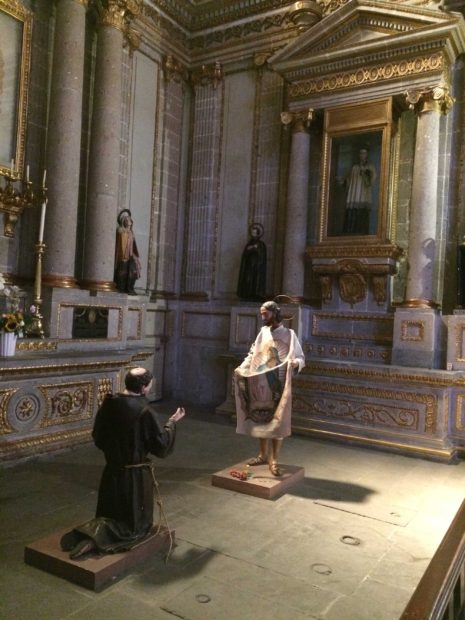 And when you step out, there are groups of dancers in traditional Aztec dress performing and blessing passers-by with smoking sage sticks. In case you were thinking you were in Italy inside that church… you weren’t. 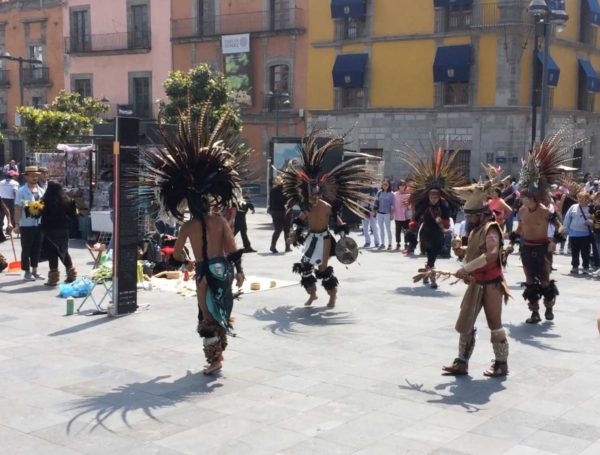 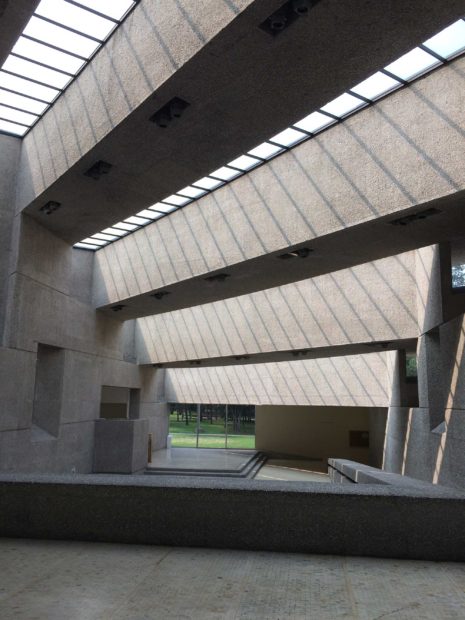 A highlight of a recent trip to the Tamayo were these clever works by Tania Pérez Córdova. The first are museum windows that have been replaced and warped: 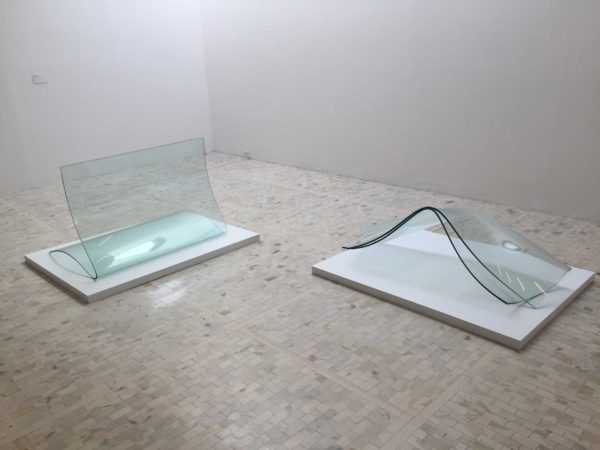 And this marble column featured a divot filled with water and a colored contact lens. Ideas of holy water, and special sight, and disguise, in one elegant piece. 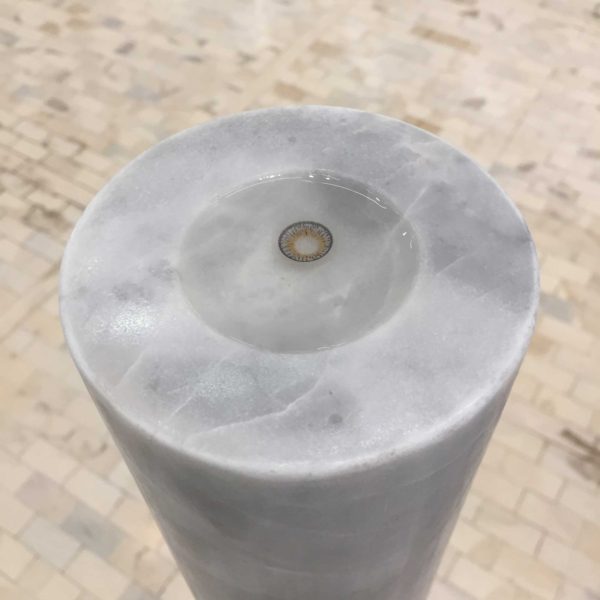 This handsome work by British artist Lucy Skaer was virtually indistinguishable from the rough concrete wall behind it: 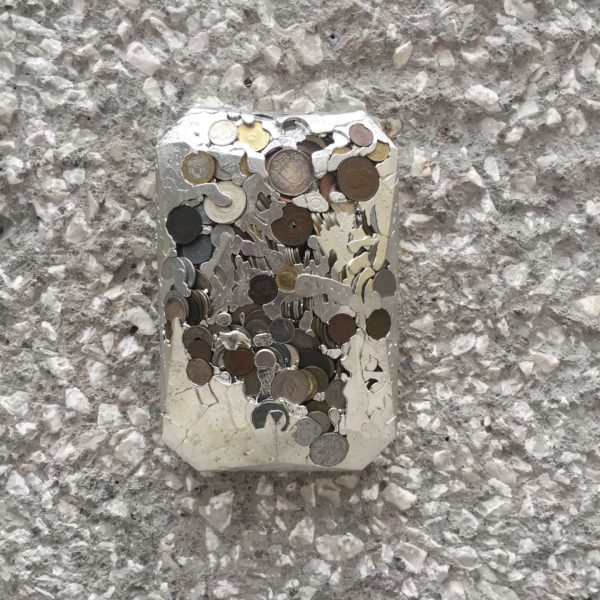 The Tamayo has a good permanent collection as well, which includes this wall piece by Teresa Margolles. 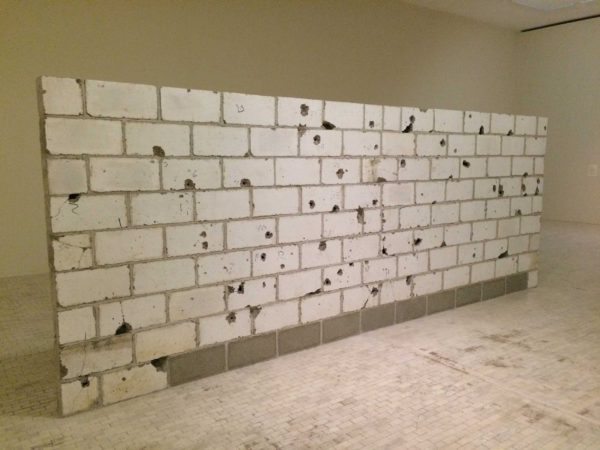 Perhaps my favorite museum in Mexico City is also one of the oddest: the Museum of Modern Art, a series of insanely groovy circular galleries straight out of a Bond film, all bathed in a yellow glow from domed skylights: 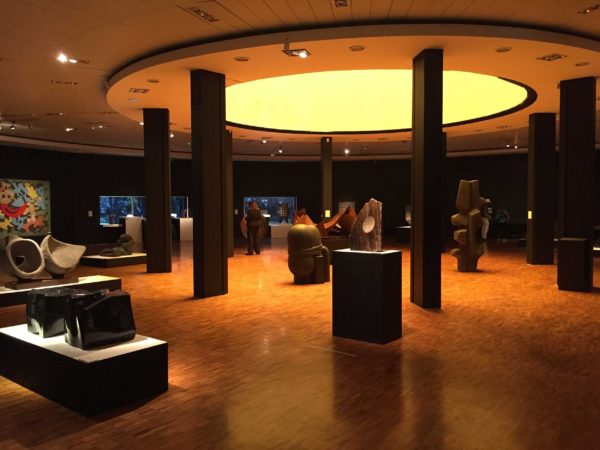 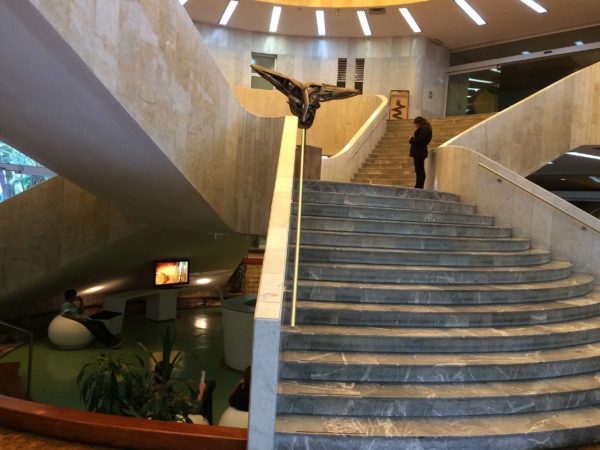 Note the lounge pods below.

On a recent visit they had an interesting Jean Arp exhibit, featuring a rare original copy of Cabaret Voltaire, the first Dada publication. 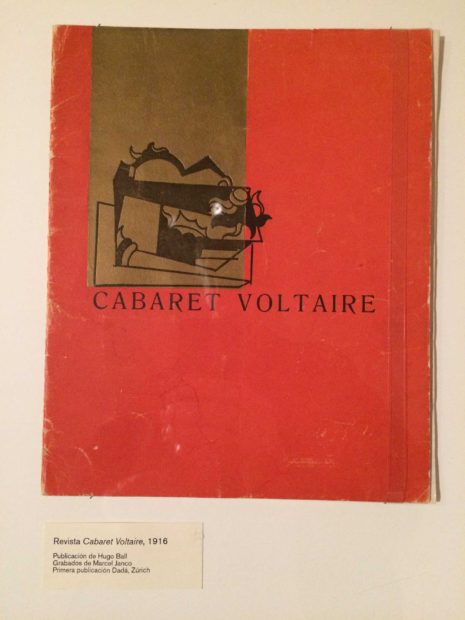 I liked these pedestals made of cinderblocks: 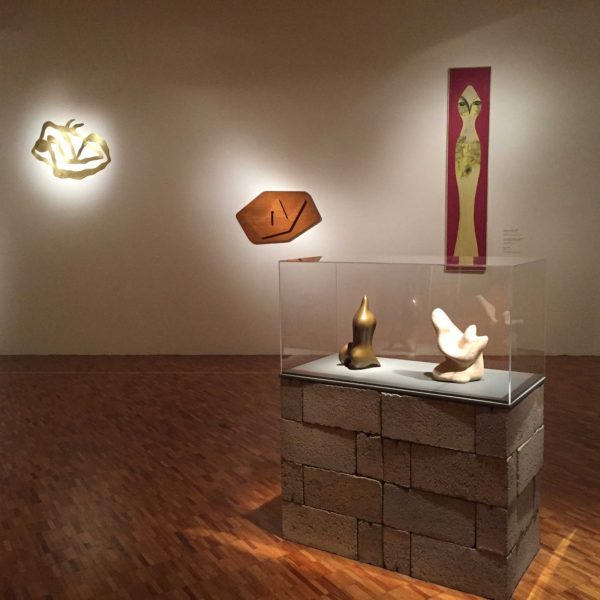 Of course, many people consider the Museo Nacional de Antropología to be the crown jewel of Mexico City’s cultural scene. It’s an embarrassment of riches chronicling the various Pre-Columbian cultures of Mexico. Here’s an amazing flint cutting tool (it’s too ingenious to be called merely a knife): 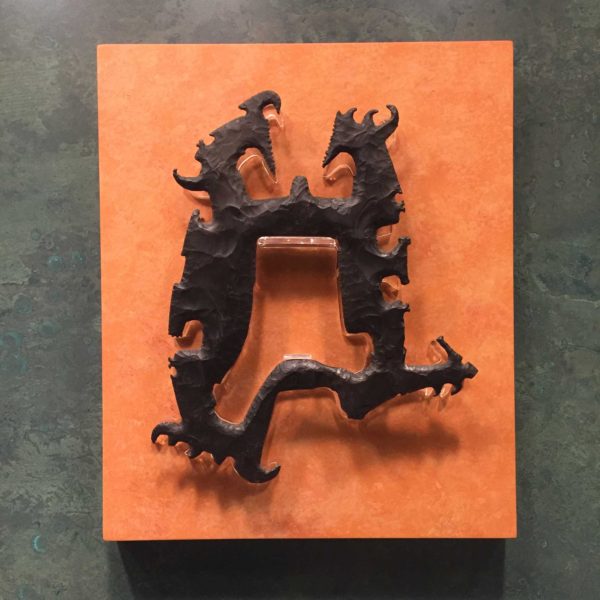 The Aztec Stone of the Sun (not a calendar), with me for scale: 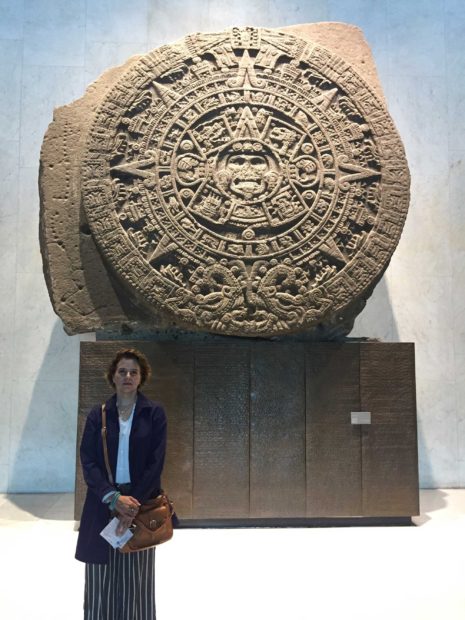 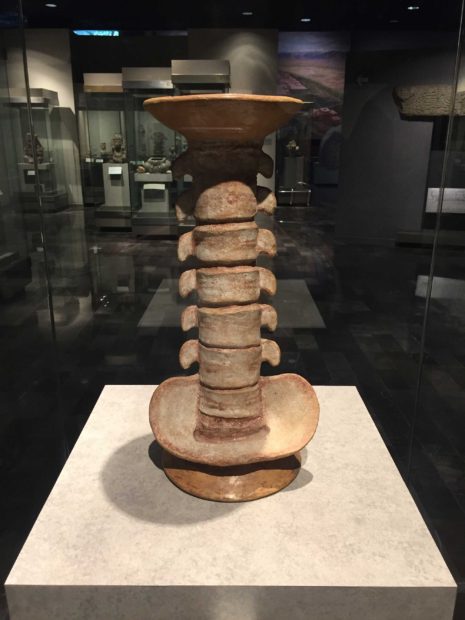 Pre-Colombian pedestal in the form of a human spine

Finally, the real joys of visiting Mexico City are the small moments of surprise in the street, reminders that you’re someplace else, like this wall of posters pasted over each other until they became a thick sculptural blanket: 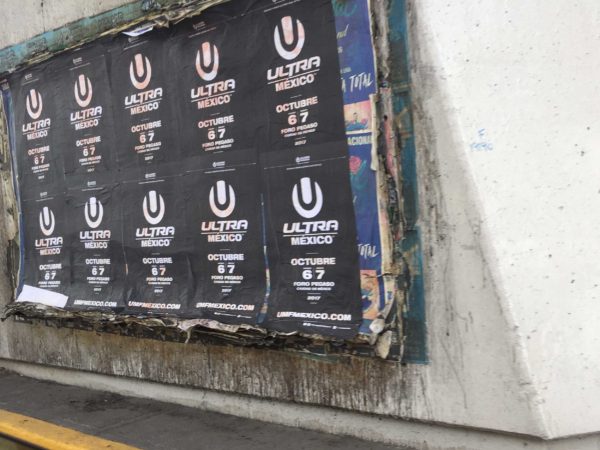 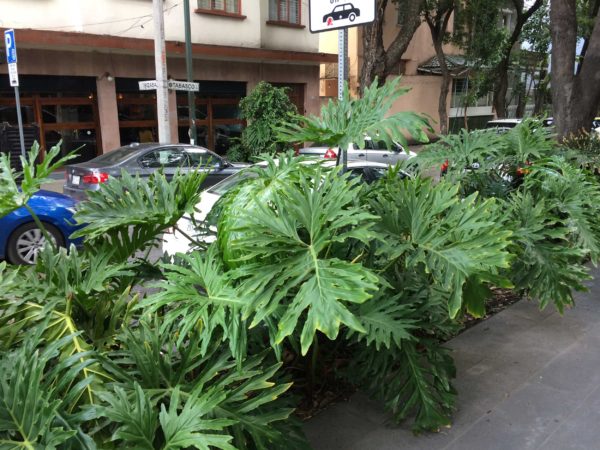 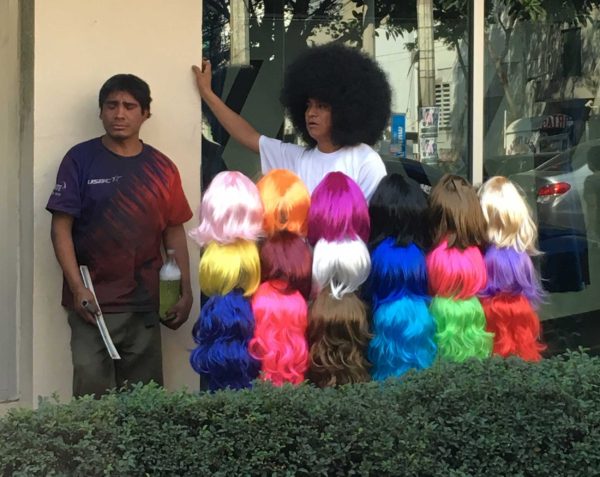 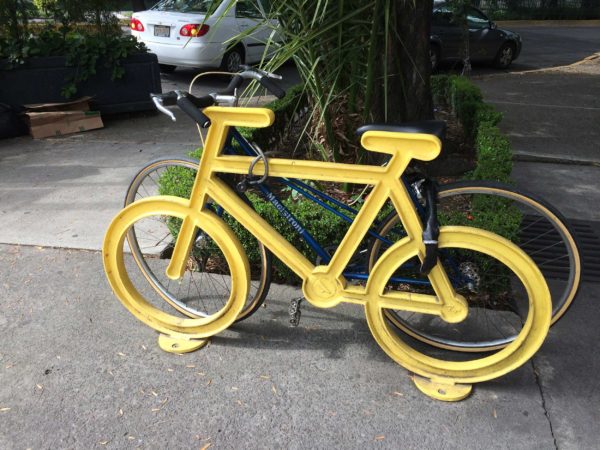 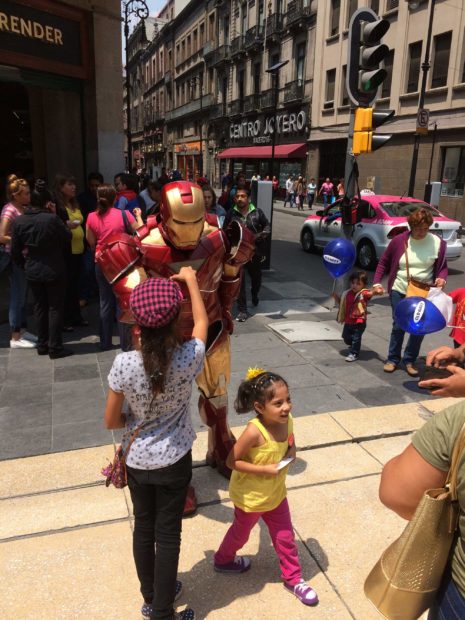 Mexico City has somewhere in the neighborhood of 30 million inhabitants. It is unimaginably vast. This overview doesn’t begin to scratch the surface of the galleries, museums, restaurants, parks and other delights that await the visitor. If you haven’t already, you should go. 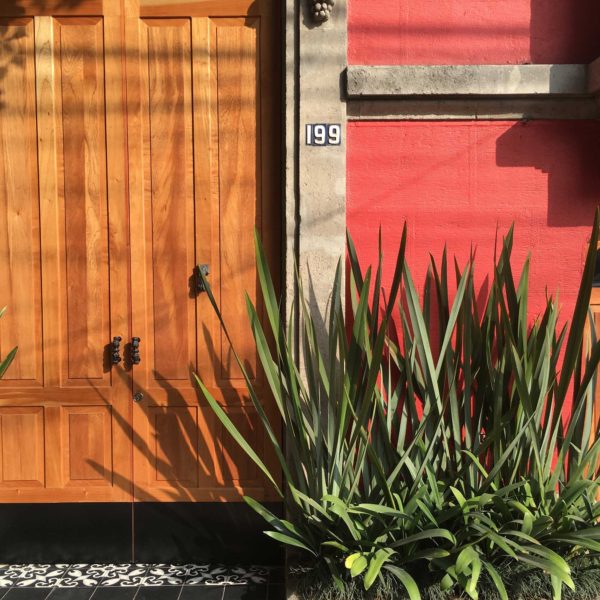 Loved seeing DF from your perspective!

While I wholeheartedly agree with your exhortation to go to Mexico City, your dismissal of all the border cities as “only sort of counting” was a little more than irritating. Perhaps what you meant to say was that the rich artistic and cultural activity to be found in border cities like Tijuana and Ciudad Juarez are really only a small sample of the much fuller and richer artistic, cultural and historical treasures to be found further in the interior of the country. Unfortunately many people from the interior of both countries tend to be a bit dismissive of people living on the border, and those of us who dolive here are rather tired of the attitude. Having said that by all means everyone should get down to Mexico City at least once.

Good point. What I meant was that the border is a unique region, on both sides. It’s neither completely Mexico nor completely the US. Absolutely fascinating, richly cultural, but Americans who claim to know what Mexico is because they’ve been to Nuevo Laredo or Tijuana are missing a lot. Ditto the reverse.