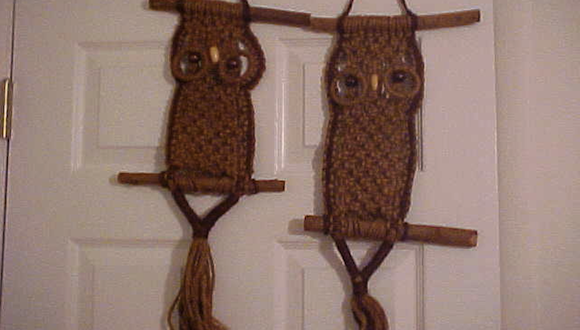 According to Wikipedia, one of the earliest recorded uses of macramé-style knots as decoration appeared in the carvings of the Babylonians and Assyrians and macramé was most popular during the Victorian era. But macramé regained big-time popularity during the 1970s during which bored housewives and creative hippies made some amazing art work.

For artists and amateurs who would like to start a macramé collection to rival Glasstire’s Bill Davenport (go here to visit his “Treasury of Macramé Owls”), Pop Shop Houston is sponsoring a Modern Macramé Craft Class at Houston’s Insomnia Gallery tomorrow evening, August 4, from 7-9pm. It costs a chunk of change, but all materials are supplied. Get started on those groovy owls!