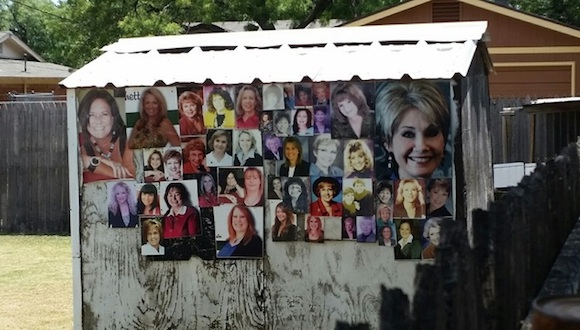 Earlier this week, Abilene residents noticed unusual decoration on a man’s backyard shed, reports BigCountryHomepage. Tacked up in a salon-style, detective crazy wall fashion on the side of the building and on the man’s fence were large and small headshots of female realtors and a local attorney. Some of the women pictured spoke with KTAB and KRBC, Abilene’s TV stations, and said that the shed was “creepy” and made them uncomfortable.

KTAB and KRBC also contacted the man responsible for the installation, who claimed that he realized why people might feel that the display is “creepy” and said that he would take down the photos “to allow those concerned to sleep soundly.” He did not provide the stations with any insight as to why he created the display in the first place.

Abilene police were contacted about the matter, but did not issue a citation because the man was not breaking any laws. The city’s police chief released a statement, saying:

APD and ACU PD are aware of this issue [and] we readily concede that the issue is very concerning, but we do not believe it is criminal.

The question remains: was the wall executed with ill intent, or simply an art installation/poster bombing gone awry?

Funeral Home Gets into the Installation Art Biz

What I find creepy are all the billboards with large photos of smiling women’s heads selling real estate.

The men are equally creepy.