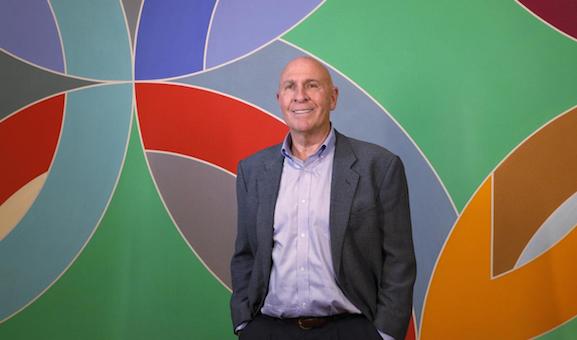 This morning Modern Art Museum of Fort Worth’s director Marla Price announced the retirement this summer of Chief Curator Michael Auping. Auping has been with the museum since 1993. Prior to that he was the curator at the Albright-Knox Art Gallery in Buffalo.

“We are grateful to Michael for his enormous contributions to this organization, the Fort Worth arts community, and the art world over the past 24 years,” says Price. “His scholarship has elevated the Modern to international status among modern and contemporary art institutions. We thank him for his dedication, and applaud the legacy he leaves.” Price has been director of the museum during Auping’s entire time there.

Auping, a native of Southern California, is highly regarded amongst his peers and art supporter alike. His tenure with the Modern has been consistently impressive, as he organized internationally acclaimed (and many traveling) shows throughout his time there, including Philip Guston Retrospective; Georg Baselitz: Portraits of Elke; Anselm Kiefer: Heaven and Earth; Ed Ruscha: Road Tested; Declaring Space: Mark Rothko, Barnett Newman, Lucio Fontana, Yves Klein; Urban Theater: New York Art in the 1980s; and Frank Stella: A Retrospective, which was coorganized with the Whitney.

Auping was instrumental in organizing the Museum’s transition into its current celebrated Tado Ando building, and Auping has been outstanding in his use of the space. His installations—whether massive or subtle—have been uniformly gorgeous and effective.

In addition to organizing exhibitions, Auping of course spearheaded the acquisition of some of the museum’s most important works in its collection, including Richard Serra’s Vortex, 2002 (given in Auping’s honor), as well as “…key works by Anselm Kiefer from the seventies, eighties, and nineties; Martin Puryear’s Ladder for Booker T. Washington, 1996; and significant works by artists Agnes Martin, Georg Baselitz, Gerhard Richter, Cindy Sherman, Carl Andre, Bruce Nauman, Richard Long, Vija Celmins, and Robert Motherwell.”

Auping is at work on a book about the Ando building, and another about his own career trajectory and conversations he’s had with artists throughout, titled Forty Years: Just Talking about Art.

Via the Modern: “Senior Curator Andrea Karnes will take over management and administration of the Modern’s curatorial department.”

Michael could really put a great show together. I truly enjoyed the Frank Stella and New York in the 80s shows. I wish I could have seen the others.

We will be sad to see him leave the museum. But it is a well deserved “retirement” for a brilliant curator!

Michael: Thank you for all the great work you have done throughout your career thus far! I have very fond memories of meeting with you way mack in the day when you were at the Albright Knox and I was at Hallwalls. I look forward to reading all the books you will write. = Sara