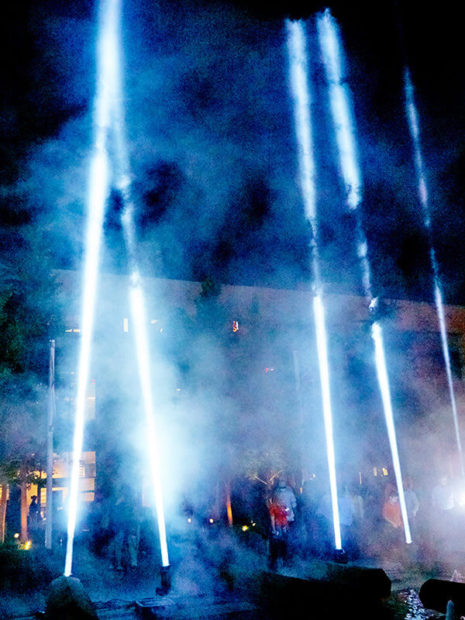 The Dallas-based biennial show of art, light, and sound called AURORA will have its fifth installment in 2018, and it has grown so much since its debut in 2010 that the organizers have announced that instead of being centered in the Dallas Arts District, it will move its center to Dallas City Hall and its environs. 2015’s attendance was about 50,000, and AURORA is giving itself an extra year to plan for its expansion.

AURORA co-founder Joshua King: “Our aim is to be a city-wide project that expands through and beyond the scope of downtown Dallas. By shifting the central exhibition footprint, the artist will have a fresh canvas to work with, while bringing attention to an iconic public space in the city.”

He’s talking of course about City Hall itself, the slanted brutalist spaceship designed by I.M. Pei that opened in 1978. The setting is fitting, because the theme for AURORA 2018 is Future Worlds, “a forward-looking invitation for artists and visitors alike to imagine a series of possible futures.” The curators for 2018 are:

AURORA holds auxiliary events during off years and through the city throughout the year. For more info, go here.