One of the best things a super-rich person can do is turn their mansion into a museum when they die (especially if such an act is a total surprise to their greedy children). On her death in 1950, Marion Kugler McNay bequeathed her beautiful Spanish-style villa in the hills of San Antonio to a trust, and four years later Texas’ first modern art museum opened. Today the Mcnay has a somewhat stodgy reputation, most of the temporary exhibitions are either highly senior-friendly (like the recent Impressionism exhibit) or seemingly designed by a senior to seem “out there” (two current exhibitions are titled California Dreaming and Psychedelic Summer). Many San Antonians associate the McNay as an elite wedding setting for the toothy brides and paunchy grooms of the ruling class. The recent hire of Brooklyn Museum curator Richard Aste as the new director is clearly a positive move towards increased vibrancy.

But still, the McNay rules. The grounds are staggeringly beautiful and remind one of where a cynical hermetic magnate would live in a bleak ’70s noir. The permanent collection is both impressive (there are Picassos here) and deeply eccentric. I like going there on Thursday afternoons when the light is especially baked (just kidding—it’s free on Thursdays). These are some of my favorite pieces in the McNay’s permanent collection. 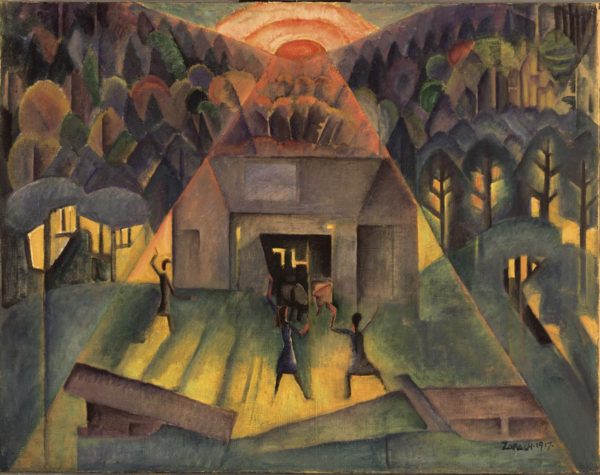 William Zorach, a Lithuanian-born American painter, was part of the vanguard of the American embrace of Cubism. In this luminescent painting, Zorach takes a fairly boring subject—milking cows at first light—and imbues it with a supernatural glow. The farmer stick figures appear engaged in some coordinated dawn “Zumba” as if activated by the sun-like flowers. The light of the sun is a triangle—mythic, conspiratorial, the symbol of the cult of labor. New Hampshire is depicted as a forest from a fable, as probably much of this country seemed to an immigrant from last gasps of the Russian Empire. 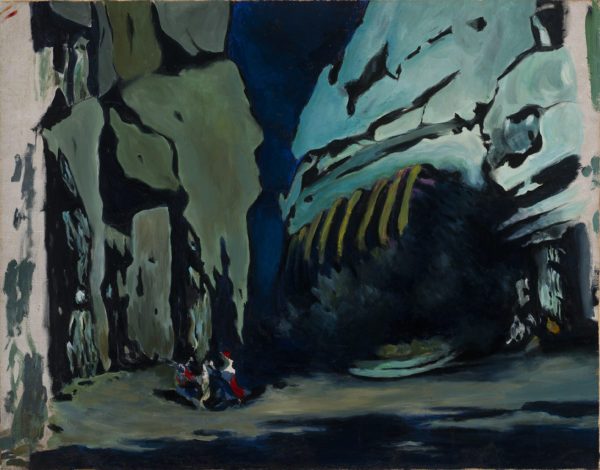 Some of the only palatable and aesthetically pleasing form of artistic Orientalism (at least to this white person) is when “The East”—in many cases Colonial India—is an exaggerated fantasia, the bejeweled greenhouse for the neuroses of the European mind. The depictions, such as in the films Black Narcissus and Jean Renoir’s The River are intentionally theatrical and fake, the vision of a distant land that would either heal or drive one insane. A dreamy Russian painter of great feeling, Baskt’s painting of a larger stage background for a ballet imagines India as an aqueous, lush cavern. The dancers seem to echo under the dome of history. 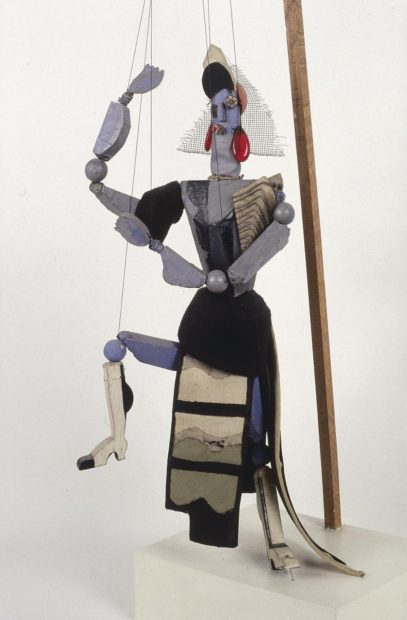 I’m generally appreciative of art objects where if they were left anonymously on your doorstop would cause a reaction of elemental horror. I also like marionettes. (I realize these two statements are redundant.) Alexandra Exter, another daring Russian painter and set designer (Marion McNay must have had some enigmatic Russian avant-theater Rasputin in her life), makes the marionette nightmarish and seductive, recalling the Indonesian puppet tradition. In a nice surreal flourish, the design of the marionette’s dress appears to be the craggy Iberian landscape on which she dances. 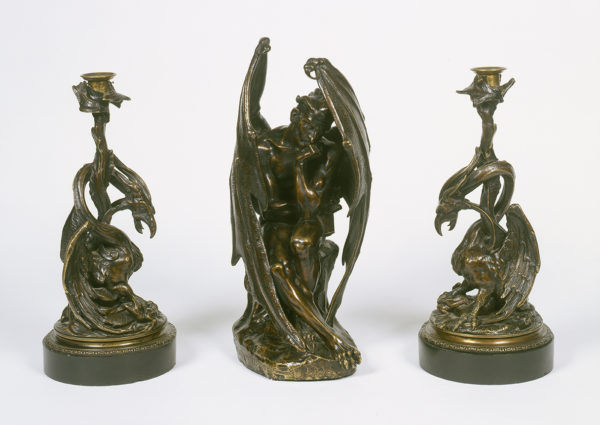 This is probably my favorite piece in the museum. It’s easy to pass it by because it resembles so many pewter figurines of demons in sword and tabletop gaming stores in dying malls. But Feuchere’s sculpture of Satan is the progenitor of a now archetypical aesthetic of the satanic, as influential in shaping the default image of “The Devil” as John Milton’s Paradise Lost. Satanic subject matter was a favorite among French romantic artists in this period. It was a freaky time in the world—people thought a lot about the Rosetta Stone, lost tribes, and newly discovered dragon (dinosaur) bones. Joseph Smith was inventing Mormonism, by far the most successful Christian rock tour of all time. I like to imagine the Johnny Depp of 1833, proudly displaying his Satan on the mantle of his salon, regaling his guests with tales about pagan cultures. 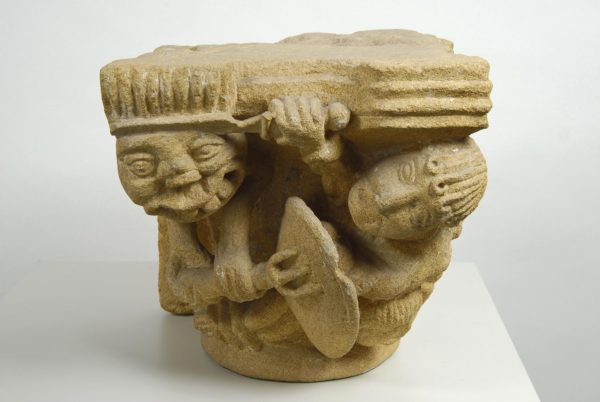 Portugal(?) is my new favorite answer to the question of any object’s unknown origin. If these columns adorned with grotesqueries are indeed from Portugal in the 1100s, it was during the Islamic reign. What’s striking is the gargoyles’ resemblance to Mayan and South American art from the same period, as if the globe shared the same dream of terror.

One night when I was living in China, an eccentric friend from Colorado and I were walking home from a bomb-shelter rave on a clear night. “Orion!” my friend exclaimed pointing to a brilliant belt of stars. “God I wish I lived as a shepherd a thousand years ago.”

These columns reminded me of that exchange and make me understand it a little better. 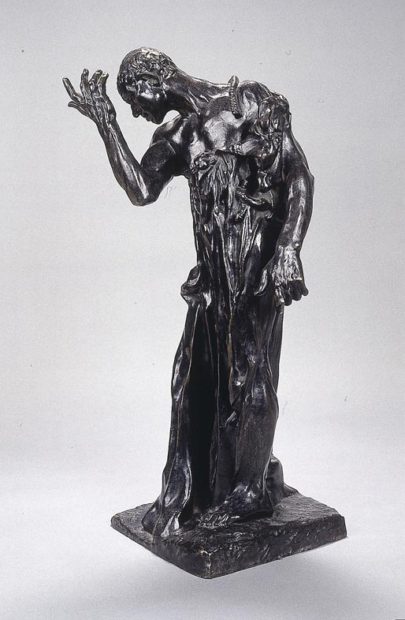 An old man in a beret once told me: “Sculpture begins with the Greeks and only continues with Rodin.” (He pronounced it, breezily, Roo-dan). This always seemed totally false, but it did make me appreciate Rodin’s genius amongst his contemporaries. This piece, part of some smaller casts he made for the larger than life series The Burghers of Calais depicts one of the rich people who martyred themselves during the insanely bleak Hundred Years’ War. Edward III lay siege to Calais and demanded the town’s richest and most powerful people be executed to spare the rest of the population. The six people that came forward comprise the Burghers of Calais (in true rich-person fashion, they were all spared for some reason). The rest of the Burghers look like glum, pious medieval people, but Pierre looks as if he’s wearing a toga and also invented voguing. It’s as if Rodin got bored making fake rich martyrs and said to himself, “Fuck it, I’m making a really hip Roman guy and he just watched Paris is Burning.” 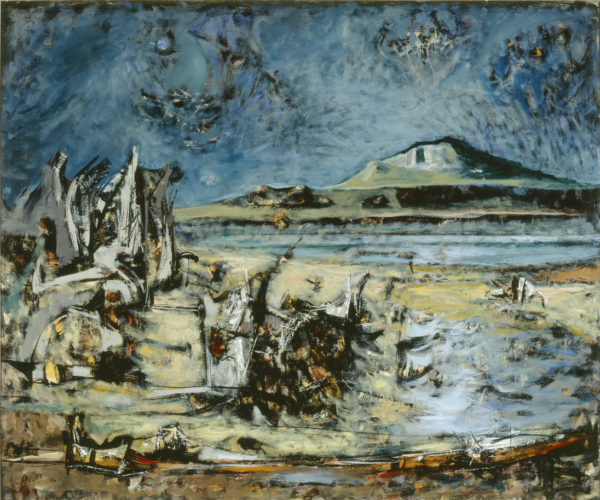 Everett Spruce (that’s a great painter name!), an Arkansas-born Texas transplant, paints Texas with the same dry grim grandeur contained in the albums of Terry Allen and the works of Cormac McCarthy. Spruce’s vision of the Texan expanse is effortlessly and emotionally post-apocalyptic. I’ve always felt like living in Texas put you ahead—you know, the future world awaiting everyone else—toward something hotter, heavily armed, more religious. 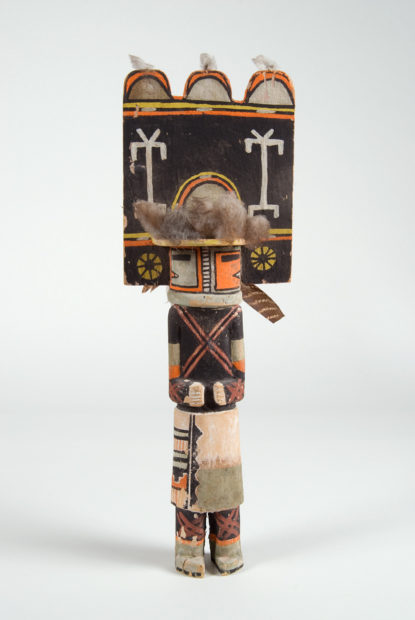 Katsina dolls. Did someone say Katsina dolls!?! I love those guys. Katsina dolls (or ‘Kachina’, allowing you to correct anyone who ever says it) are the physical representations of the Hopi people’s spirits and ancestors. Some may help you produce more wealth. Others may defend you from attacks. Essentially they’re your mystical little homies who help you in the struggle of life. When I go to a legendary church like Notre Dame, I don’t think the troubles of my life would be solved if I only went to church more, but when I look at Katsina dolls, I definitely think my not having one as a friend is the source of my woes. Katsina dolls are a living indigenous art-form and the newer dolls are more intricate and Mad Max: Fury Road-ed out. If someone were to anonymously send me a Katsina doll, I would be both horrified and eternally grateful.