As Moths to the Light: Pipilotti Rist at the MFAH

In 1965, the Swedish photographer Lennart Nilsson published the first images of fetuses inside the womb. The photographs were a sensation, appearing on the cover of an issue of Life magazine that sold 8 million copies in its first few days on the newsstand. For those of us born after Nilsson’s technological breakthrough, it’s hard to imagine the impact these images had on the collective human imagination, but surely it was akin to the first images of Earth taken from the Moon. Here was the beginning of human life. Here was, literally, the origin of the species.

I thought of Nilsson’s work on seeing Pixel Forest and Worry Will Vanish, the latest immersive installation by the artist Pipilotti Rist, which was recently acquired by the Museum of Fine Arts, Houston and is on view there this summer. Like Nilsson, Rist is interested in the dramatic, fetus-eye view of the world; and like him, she uses the latest technology to give us a close look at nature. With a massive two-channel video and an equally massive “forest” of multicolored LED lights that you can walk through, Rist delivers a sensational light-and-sound show that’s ultimately a very simple restating of some of the oldest human origin stories and beliefs. We are one with nature, this work says, and the tiny systems inside our bodies are a mirror for the systems of the universe. 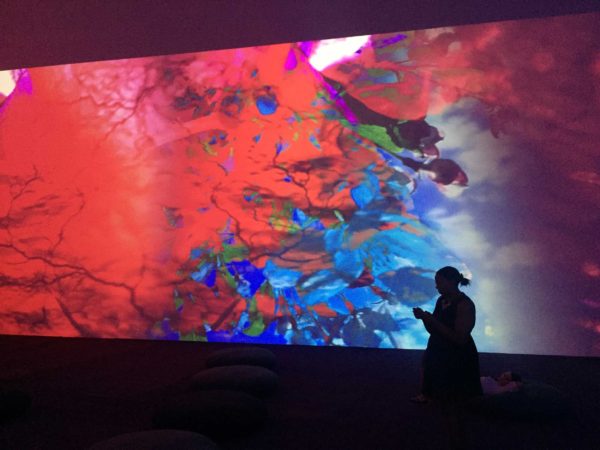 Pixel Forest and Worry Will Vanish was exhibited previously at the New Museum, where the critics Robert Storr and Ben Davis both remarked on the unabashed feminism of Rist’s work. Storr mentioned her “shameless female gaze” and Davis said, “the law of [Rist’s] land is feminine, and it is non-judgmental… The great theme of her unconventionally feminist work has been living free of shame.” This shame-free brand of women-centric power (which male critics appear to find more remarkable than female ones) is especially true of Ever is Over All, Rist’s seminal 1997 video in which she walked up a street in Northern Europe, joyfully bashing in car windows.

But although her latest work has an undercurrent of female empowerment, Rist is getting at something more elemental in Pixel Forest and Worry Will Vanish. Its underlying theme is the way the human body parallels nature, the way it is nature. In Rist’s video, extreme closeups of sun-dappled ferns give way to elegant CGI internal orifices lit from without by some ethereal glow. The glassy surface of an eyeball echoes extreme closeups of dewdrops on leaves of grass. The veins in a dead plant’s leaves echo human veins, which echo networks of stars in outer space. In short: it’s all the same. The message is not terribly subtle or difficult, but the ease with which it goes down doesn’t detract from the work’s raw emotional impact. After all, the very best art will speak to anybody, and this theatrical installation is engineered to connect with, as Rist herself says, the “unconverted.” 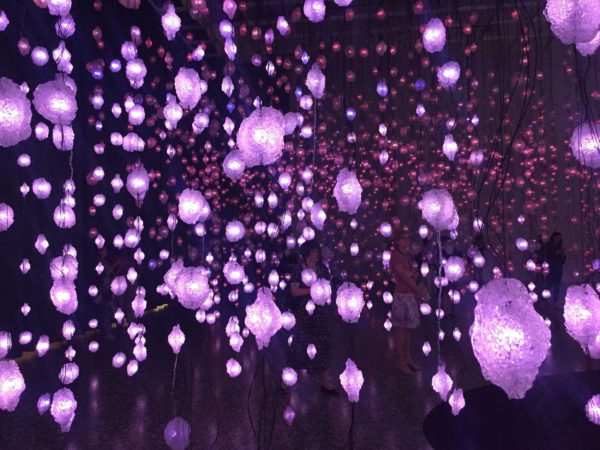 Perhaps that universal, common touch is what makes Rist’s work read to some critics as feminine. Whereas Jackson Pollock famously said “I am nature,” in Pixel Forest and Worry Will Vanish, Rist seems to say “WE are nature.” And her inclusivity extends from the audience to the work’s central notion that, in her words, “there is no division between nature and our body, because we are pure organic material ourselves.” In her telling, the forest of LED lights is like a simplified brain, and she invites viewers to inhabit, for a time, this network of neurons that are always beautifully firing. It is a luscious experience.

Of course, Rist is not presenting nature; she’s presenting an idea of nature. There’s nothing natural about this work, unless you accept the fact that video and LED lights are “nature.” Pixel Forest and Worry Will Vanish is virtual reality without the commercial Hollywood or gaming implications. Rist is asking you to engage with a reality she and her sound and light collaborators have created, a stand-in for the real thing.

Which leads us to the argument that all art is virtual reality.

That’s not too difficult an intellectual leap to make; what’s really interesting is whether reality, virtual or otherwise, is experienced primarily by the one, or by the many.

And this is where Pipilotti Rist shines, because she appeals to the viewer both as an individual as well as a collective group. Walking into the environment of Pixel Forest and Worry Will Vanish is an intensely individual experience; and yet you will almost always share that physical encounter with other people. (Scattered in front of the huge video are the large cushions that have become de rigueur for these types of installations, where the audience is invited to snuggle up together and chill.) Rist is interested in whether the audience sees itself in her ideas, because as she puts it, “That’s the moment where we are not any more alone.” 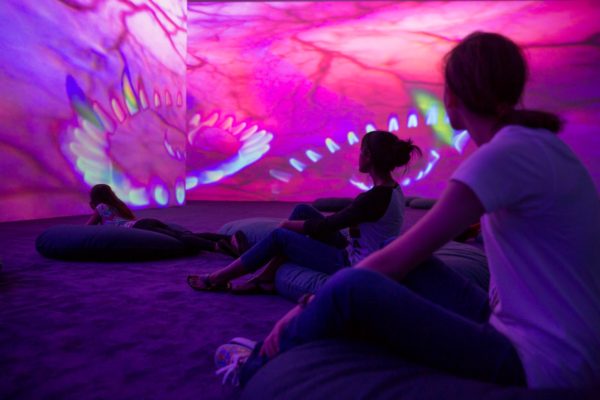 Perhaps this connection with other people — this realization that we are not alone — is the reason these types of immersive installations are suddenly ubiquitous in the art world. You enter Pixel Forest and Worry Will Vanish and it is the opposite of standing in front of a perspective painting, which is exclusively about you and the image. Many people can swim together through Rist’s sounds and lights and imagery in this gesamtkunstwerk, this total immersive experience. Participation in a shared space to get at ideas of nature (or the infinite, or God) is nothing new to human beings: we’ve done it for centuries at church or the opera. And once again, we are as moths to the light with this fabulous spectacle. 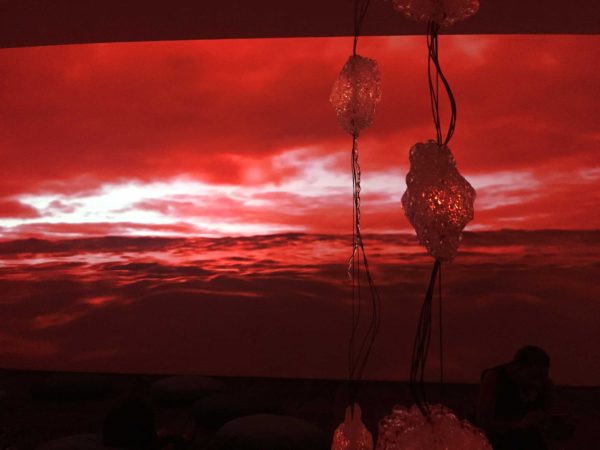 Which leads me, inevitably, to Yayoi Kusama. I’m sure I was not the only museumgoer who raised an eyebrow when I saw the images for Rist’s installation — these arrays of blinking LED lights looked suspiciously familiar to Kusama’s Infinity Room, which was on display last summer in the same mezzanine at the MFAH. Surely, I thought, they could get someone to do something other than blinking LEDs? But Rist succeeds where Kusama failed, because the artifice and technical virtuosity of her installation isn’t noticeable to the viewer in person, whereas Kusama’s cramped mirrored room only works in digital photographic reproduction — making it, as I wrote last year, great for Instagram and not much else. (Musuems officials also assured me that viewers will get plenty of time in Rist’s installation, as opposed to the 45 seconds allotted for Kusama.) 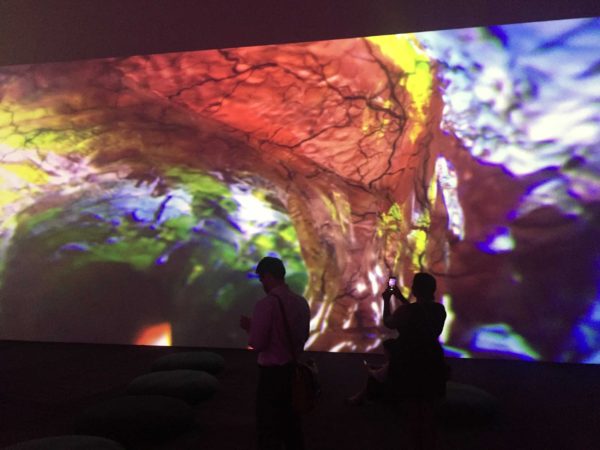 Regardless of their relative merits, both Kusama and Rist are making work that depends on technology, and these new technologies fade rather quickly. Ultimately, both artists are competing with St. Peter’s Basilica and its ilk, and I can’t help but wonder whether their own immersive environments will equally stand the test of time. And as long as we’re talking about shelf life, consider this: if Rist’s project is about heightening our awareness of the natural world, what is the difference between Pixel Forest and a tour of the Grand Canyon? If the new goal of museums is to set up a heightened experience of reality, how will they make that experience sustainable in the long run?

Then again, if you’re the MFAH and you’re just anxious to cram as many bums in seats this summer as you can, sustainability is beside the point. You need to bring out some bling for your huddled, sweaty, Houston masses yearning to feel something. Once they’ve paid their entrance fee and are through the turnstile, the sublime will do just fine.

Pixel Forest and Worry Will Vanish is on view at the Museum of Fine Arts, Houston through September 17, 2017.