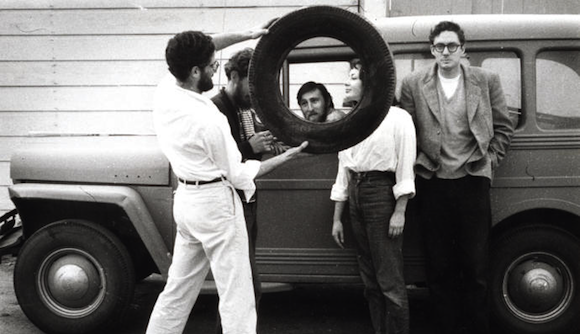 The art curator Walter Hopps, on the far right, in the alley next to Ferus Gallery, in Los Angeles, ca. 1957. PHOTOGRAPH BY CHARLES BRITTIN © J. PAUL GETTY TRUST via New Yorker

Any Houstonian art lover, as well as art lovers throughout the world, knows that we were blessed to be in the company of art curator Walter Hopps. We are now in sticky stage of the curator as celebrity, but Hopps was a curator who made a genuine and profound mark on our perception of 20th-century art.

When Hopps died in 2005, the art world of modern and contemporary art was deeply saddened, as was the community of Houston’s Menil Collection, where he served as founding director and, later, as curator of 20th-century art.

Now, The Dream Colony: A Life in Art, the collected musings of Hopps, edited by New Yorker fiction editor Deborah Treisman, has been published this month. Although the LA Times review was entitled “The remarkable curator Walter Hopps and the less than perfect book about him, ‘The Dream Colony,’” the stories inside are bound to engage those who would like to hear the informal skinny on Stella, Cornell, Duchamp, Warhol, among many, many others.