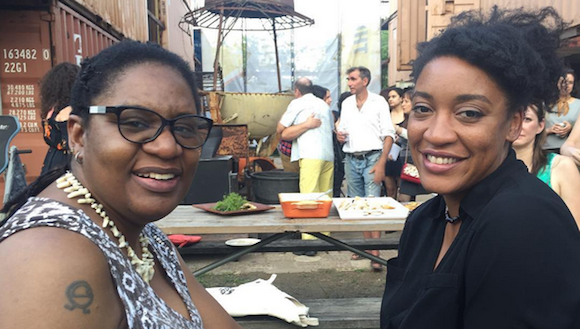 The national non-profit organization Artadia has awarded over $3 million to more than 300 artists in the past 18 years. In 2003, the city of Houston was added to its list of recipients, which now includes artists from Atlanta, Boston, Chicago, Houston, Los Angeles, New York, and San Francisco.

Last week, Glasstire reported on Artadia’s list of its five awesome finalists. This week, it has chosen its two awardees: Regina Agu and Kaneem Smith.

Agu and Smith will each receive $10,000 in unrestricted (meaning rent and food, if need be) funds, as well as access to the ongoing benefits of the Artadia Awards program. Project Row Houses‘ Ryan Dennis, who served as one of the initial selection jurors as well as one of the final award jurors, stated of the awardees:

Regina Agu and Kaneem Smith represent two dynamic women working in different mediums, but both are very focused and articulated the vision of their work with grace and passion. Regina, an artist that has a collaborative spirit, is informed by deep research and presents text-based work along with collage and photography, and is weaving narratives together in a refreshing way. Kaneem, who moves between sculpture and fiber works, pushes the viewer to think about African American history and the Diaspora poetically and powerfully. I could not be more thrilled to award these two artists and look forward to seeing what they accomplish with this support.

The jurors also went out of their way to praise the other finalists as “deserving of further recognition.” The 2018 Houston application will be open from April 15-May 15.