Happy Summer! or, Something Wicked This Way Comes

by Christina Rees May 27, 2017
FacebookTwitterEmail 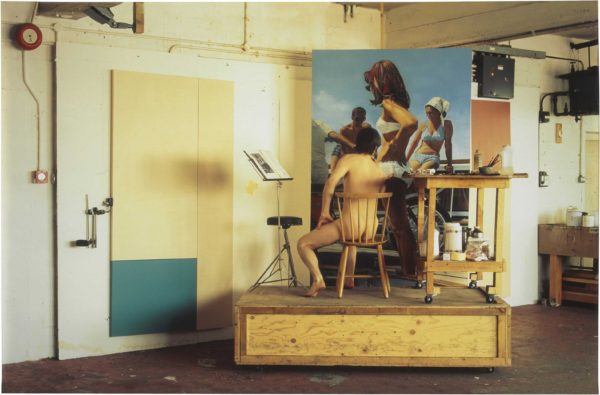 I’ve been in England for more than a week now. I used to live here. It’s almost impossible to be in the English countryside and not go for long, meditative walks, and I can’t remember encountering weather that would discourage a stroll, whether through the streets of London or the hills and copses outside of it. The English version of “hot” (which is what it is here now) is generally so mild compared to a Texas summer day—and conversely, its coldest days may be dreary and bitter, but they are unaggressive compared to a Texas ice storm—that for the two years I was in London I don’t remember not walking miles every day, in any direction. I miss that terribly.

But what it brings to mind on this trip is how no matter the month, Northern Europeans don’t have to change tack for the sake of weather. They are famously stoic people, yes, but wind and clouds are hardly reason to not get to work. But the heat of a Texas summer changes the working strategy of so many artists back home. I happen to really like the heat, but I don’t work outside, or in the kind of non-air-conditioned raw space that so many Texas artists call their studios.

My husband is an artist and an English transplant to Dallas, and his culture shock was compounded when he realized his way of painting wet oil into wet oil, day after day for months on end, is nearly impossible from May through September, because even ambient Texas heat dries the paint within hours—and his studio is air-conditioned. It’s also huge and not well insulated, and cooling it to the level of a British studio is folly, and expensive beyond reason. (He attempts it anyway.) Plenty of Texas artists may retreat from bigger studios into their domestic spaces during these months and make smaller, less ambitious work, but plenty more can’t shift their work or sacrifice space that dramatically. This means the summer months loom before them like a threat.

And here’s a problem without an easy solution for a Texas-based artist: so many shows (solo and group) open throughout the fall, in every major art center in and outside of the state, that artists can’t afford to not work through the summer. The show must go on, and new bodies of work take time, and deadlines are deadlines—whether it’s 60 degrees out or 106.

This goes beyond the issue that the art world at large breaks up over the summer (especially late summer) and that the patron class is on vacation from Memorial Day through Labor Day. Galleries have traditionally done group shows of inventory in the summer, or solo shows of young, untested artists who won’t yet nab a prime October or April slot. And summer heat has a way of not just elongating days, but also decompressing anxieties, pressure, and formality, whether the timing is good for that or not. We associate summer with something like vacation because this is when the school year ended when we were kids. But then you hit adulthood, and the forced laziness and informality of summer turns out to be its own oppression. It’s like there’s a heated clamp on the summer months—like you’re actually not allowed to be too ambitious.

But Texas artists are some of the most resourceful and resilient I’ve ever encountered. I know some who rig themselves a ‘cool room’ within their larger studio—a smaller air-conditioned area they retreat to in between long bouts of working in the bigger space. I know artists who go to work at 5 a.m. in the summer, and get a full stint in before the temps in their metal-skinned spaces get evil—they break off around noon. Others just buck up and work through the heat, of course, like plenty of other Texans do in their non-artist day jobs. You have to take into consideration that certain materials don’t work with heat, either. So problems—with temperature, deadlines, materials—lead to what artists do better than most: problem solving. They get it done. Fall rolls around, and there’s the art.

This isn’t to say that the cold weather isn’t its own problem, and certainly the Northern Europeans know a thing or two about working through a long, dark winter. I spent one winter living in my husband’s studio in East London, crouched over a laptop and flanked by two big plug-in space heaters. He put on a couple of extra sweaters (jumpers, I mean), brewed some tea, sucked it up, and got on with it. Just like he does now, except in the summer.

Bloody right! The “good” galleries keep the usual rotating exhibits during the Summer. Why close up shop? People are as likely to holiday in October as July. Summer shows usually draw fairly well.

“Even ambient Texas heat dries the paint within hours”. Unfortunately, I’m so familiar with that. Really annoying for working with oils.