by Jennifer Smart May 24, 2017
FacebookTwitterEmail 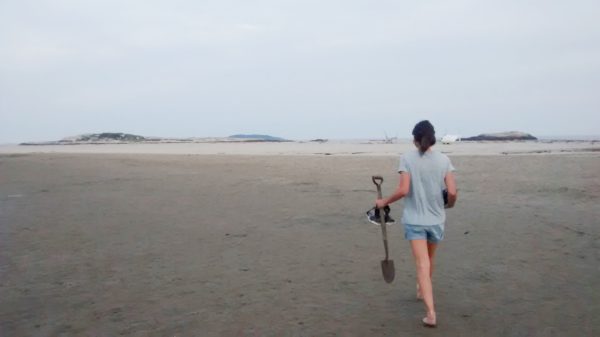 Dig/Site, the show on view at the Reading Room, is a spare documentation of an artist’s search for purpose. New York-based artist Olivia Divecchia spent the last two years digging and photographing the holes she dug into the shorelines of various beaches along the East coast. It was an open-ended project when she began but she documented the locations of her dig sites and wrote about the process extensively, resulting in a highly detailed diary of artistic process.

For her first solo exhibition Divecchia and curator Temple Shipley have arranged small prints of the holes in diptychs alongside photos Divecchia was regularly taking of her bed after waking each morning. The messy sheets are a good visual counterpoint to the undulating water which, in the captured images, fills the holes in the sand. The diptychs, nine in total, are arranged along a custom-built wood table in an arrangement that evokes an archive. A large video still projection of Divecchia, shovel in hand as she walks the beach, hovers above it. 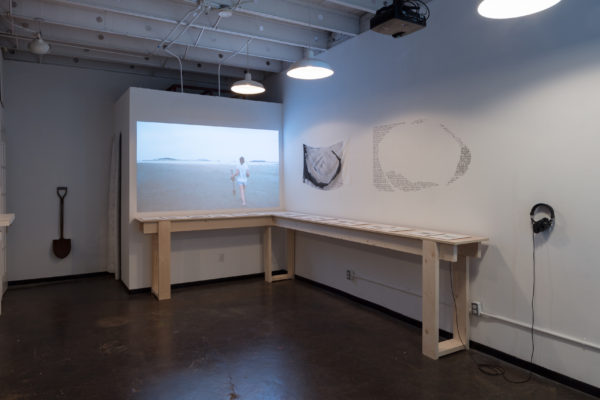 Although the diptychs are arranged as the focal point of the exhibition, the show contains other remnants of Divecchia’s process: a lightbox features a drawing which maps the dates and locations of the holes she’s dug, the shovel she used is installed on a gallery wall, and copies of an artist book are available for visitors to peruse. The book contains Divecchia’s photographs alongside her writings regarding time, place, process, and other personal details surrounding the project. A sound piece is also available to listen to through headphones, and consists of Divecchia reading some of the text she’s affixed to the wall. The wall text is interesting; in an effort to compress the distance for herself and her audience between the experience of photograph and text, Divecchia erased the middle section of a vinyl text piece in a wave-like pattern—another visual reference to the water in her photographs but also, perhaps, to the futility of all effort and the fragility of experience. 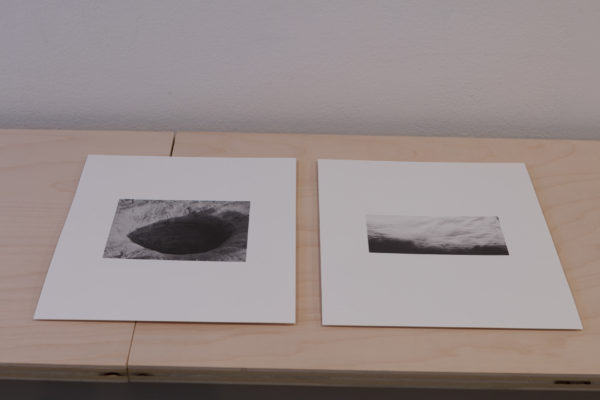 The show is both a document of Divecchia’s process, and the origin story of an artistic project. Shipley and Divecchia seem to have set themselves the task of recreating as much as possible of the project’s genesis in the small Reading Room space, putting us in Divecchia’s head in a way. But the space is small, and the amount of information present runs the risk of distracting the audience from other ideas the project raises. This is a meditative project that should be at least somewhat experienced as such, and it’s a credit to the work that the show manages to remain quiet despite the over-abundance of material. 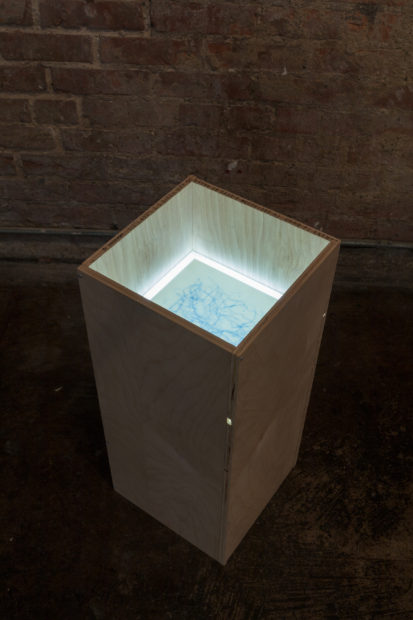 Dig/Site as a project seems born of neurosis, a therapeutic exercise for when the idea is not there, and a necessary meditation for an artist that Divecchia was able to transform into art. In an age in which we are all surrounded by stuff, and uncertain about what is significant, artists are at the forefront of our collective attempt to slow down. Of course art by its nature encourages slowness, but Divecchia is intentionally using her work to force contemplation and quietness, firstly for herself, but the subject matter of her photographs and meditative textual ramblings ensure her audience senses at least some of that stillness as well.

According to Divecchia, the format of the exhibition was inspired by an interest in the idea of placing opaque images in the context of an archive. Divecchia’s work, like that of many others, argues for the ordinary rather than the extraordinary—for valuing individual experience over a historical record built on broader consensus. All archives are at the same time, as Hal Foster wrote, “found yet constructed, factual yet fictive, public yet private;” they’re an ideal tool for communicating the ambiguous nature of meaning and experience while offering a subtle critique of power. If every archive necessarily argues for a truth or contains remnants of its creator’s subjectivity, it follows that Divecchia’s archive is no less vital than any other. 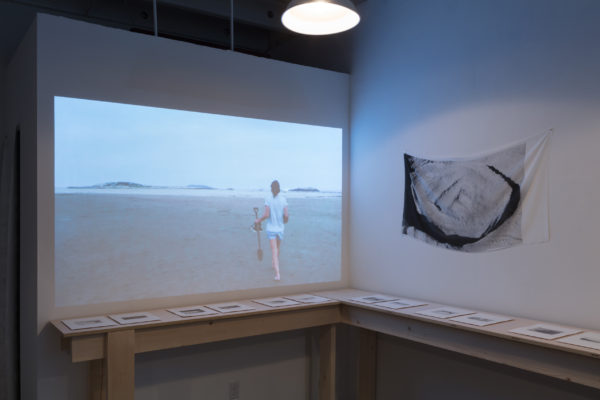 I’d be remiss not to mention another obvious implication of Dig/Site, which is the notion of absence. It’s evident in the rapidly filling holes and empty beds Divecchia photographs, and in the flickering projection of her solitary figure walking the beach with her shovel: the absence of the artist and the absence of the other.

The notion of compressing the space between text and image, which Shipley and Divecchia touched on in an artist talk which the Reading Room hosted during the exhibition’s opening, is also present. Although there’s obviously plenty to Dig/Site, I found myself wishing Divecchia would have explored that idea further in the space of the exhibition instead of using the installation as a chance to comment on the archive—an artistic impulse that feels tired in 2017. Working artists today are clearly inclined to destroy the distinctions between artistic media, but exploring new ways to visually “compress” disciplines seems an interesting idea to follow; Divecchia’s artist book and textual “hole” just scratch the surface of that notion.

As is true with nearly every show at the Reading Room, Divecchia’s work rewards contemplation. Dig/Site is more than meets the eye, although some of that complexity is easily lost in the presentation. Still, it’s clear from the show that the very young Divecchia is mindful of the roles art can and should play in the 21st century.

At the Reading Room through June 17. Photographs by Kevin Todora.