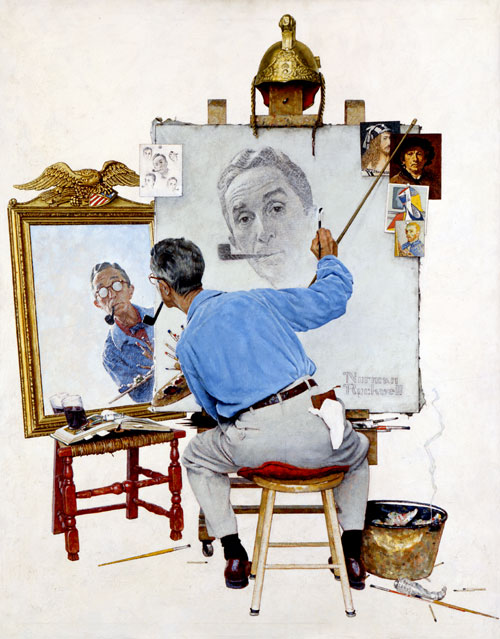 Today, Heritage Auctions in Dallas announced that yesterday one of Norman Rockwell’s most iconic works sold for a Rockwell record of $1,332,500 during Heritage’s latest American Art auction. The instantly recognizable oil study of Rockwell at his easel was made for a 1960 cover of the Saturday Evening Post, and Rockwell himself once described it, titled Study for Triple Self Portrait, as a “masterpiece.”

Most of Rockwell’s most beloved images started as oil studies for the cover images of the Saturday Evening Post. Rockwell started illustrating for the Post in 1916, at age 21. Via History’s Biography site, “Forty-seven years later, Rockwell’s work had appeared 322 times on the cover of The Saturday Evening Post — the last, a portrait of John F. Kennedy, appeared in 1963, a week after the president’s assassination.”

Study for Triple Self Portrait sold out of a private collection in Georgia. It measures 11-1/2 x 9-1/4 inches and (via Heritage) “…debuted the first installment of Rockwell’s memoir, My Adventures as an Illustrator.”