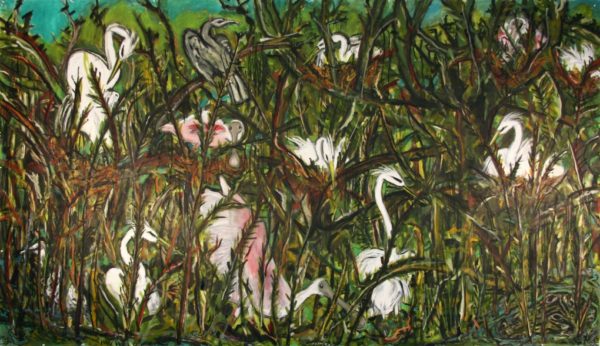 Frank X. Tolbert’s Texas Bird Project at William Campbell Contemporary Art in Fort Worth was initially generated by a 2014 commission for a suite of eight color etchings. This series of bird studies in paint and other media has been ongoing since then, and it’s being exhibited here in North Texas for the first time. The acclaimed Houston artist’s deft sense of composition and color is apparent in the variety of paintings, prints and drawings on display. The show ends this weekend so you still have a chance to catch it. 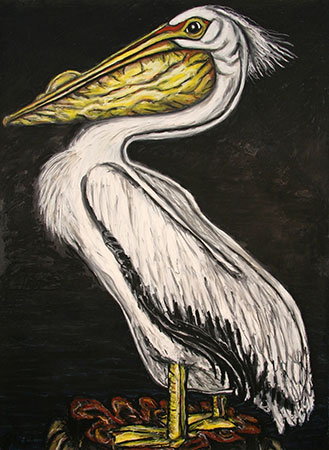 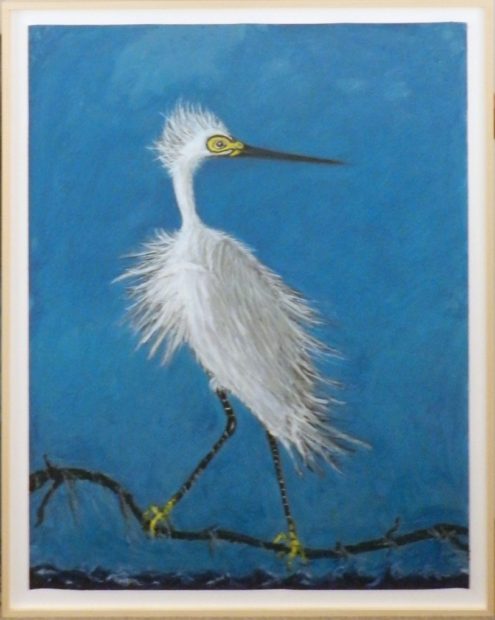 The personality and individuality of the birds is captured through Tolbert’s technique and compositional choices. Sometimes he just muscles the bird in on the canvas, as with the White Pelican, an outsized bird that confidently fills the picture frame. The Snowy Egret’s more tentative nature is revealed through the delicacy of its spindly legs and the artist’s built-up strokes of white oil stick.

Tolbert’s subject matter calls to mind the well-known work of his compatriot Billy Hassell, but each artist has his own distinct techniques for rendering birds and flora. 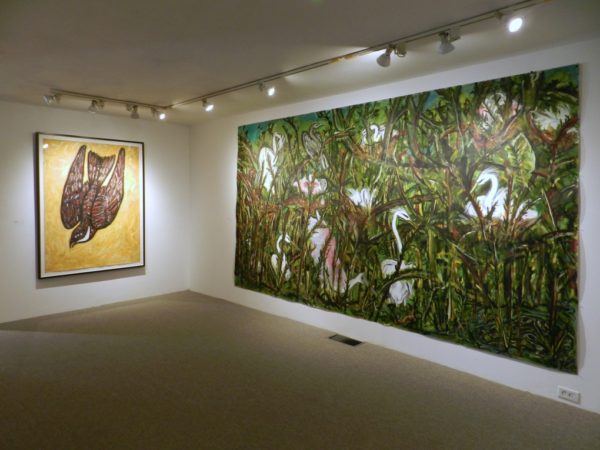 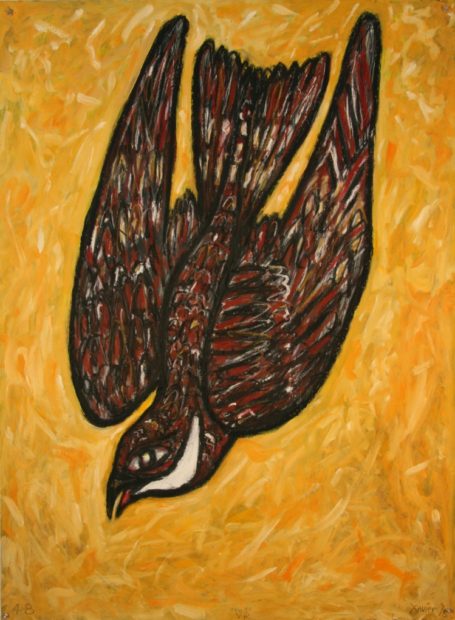 The artist’s approach ranges from highly stylized to more naturalistic, but avoids overt realism. Tolbert states: “My pieces have more of an element of emotional content rather than realism.” The flatness and elemental primitivism of the dive-bombing Chicken Hawk, simply shown like a cutout form against an astringent yellow background, contrasts with the raucous chaos of the larger High Island Rookery, with multiple birds half-concealed in the long grasses. 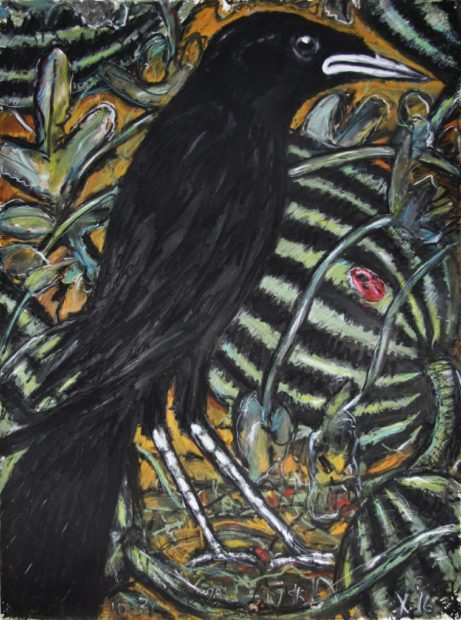 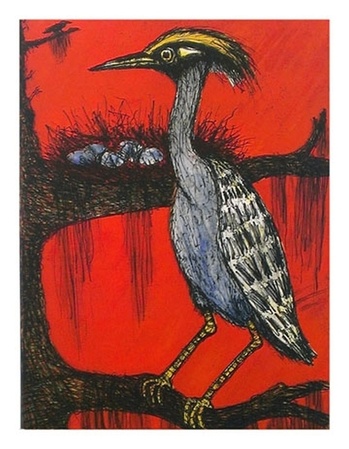 Tolbert is sensitive to his avian pairings—the plain black shape of the Common Crow is set off against the green and black stripes of the melons in the background. The background color of Yellow-Crowned Heron transforms the image into something extraordinarily memorable. 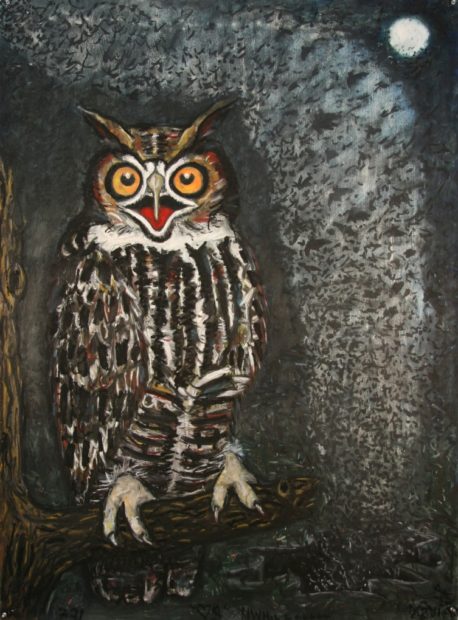 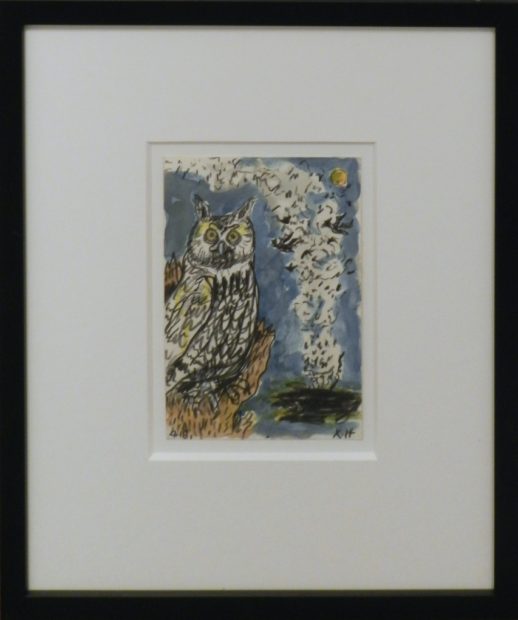 The bird that most directly engages with viewers is the Great Horned Owl, whose orange eyes are staring right back at us. This painting’s size makes it larger than life and creates a disquieting impact when compared with the much smaller, quirky sketch of the same subject, which is more amusing than threatening. 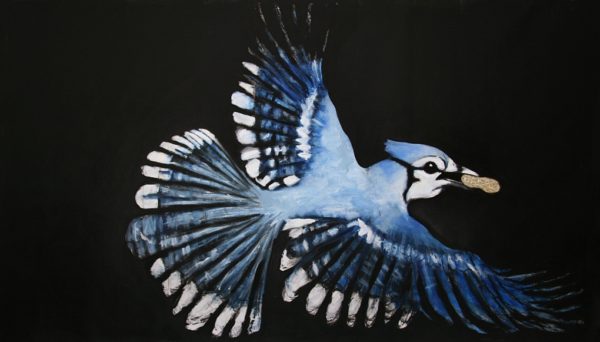 Bluejay, Peanut is one of the largest paintings in the exhibition, and the emphasis is on the spreading wings of the bird gliding against the dark background. 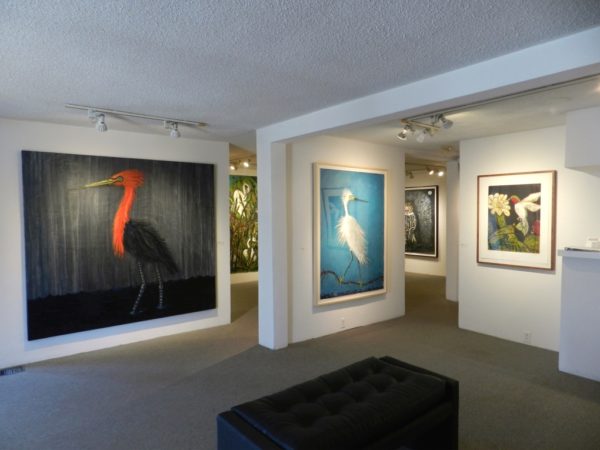 Vividly colorful and boldly drawn, Tolbert’s menagerie of painted birds converge on this quiet space, and invites both contemplation and wonder.

Through April 29 at William Campbell Contemporary Art, Fort Worth

This and That: Birds

Did anyone else really loathe the Tolbert exhibit?