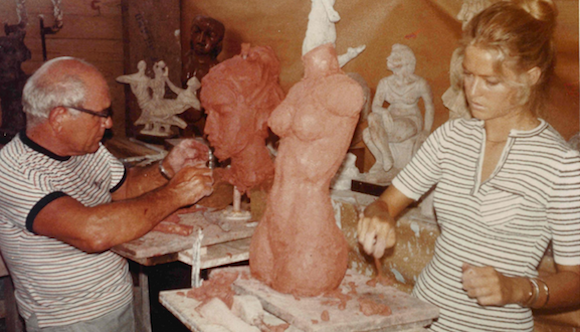 Austin’s Umlauf Sculpture Garden is currently hosting the exhibit Mentoring a Muse: Charles Umlauf & Farrah Fawcett. The show focuses on the long-standing relationship between the two artists; while a student at the University of Texas, Fawcett studied under Umlauf and the two continued a friendship throughout Umlauf’s life.

The press release for the exhibition (from which the above paragraph was taken verbatim), is riddled with sexist descriptions of the actress/artist such as, “the public will finally see a new and extraordinary aspect of an actress heretofore only narrowly known for her broad smile and bombshell looks.” She was indeed a sex symbol of the seventies, but it is now 40 years later and we have long since taken that poster down from the bedroom wall.

The Corpus Christi native bequeathed her personal art collection to the Blanton Museum of Art at the University of Texas at Austin, some of which is included in the exhibition. The show contains work by both Fawcett and Umlauf, who maintained an artistic friendship until he died.

The exhibition will be on view through August 20.