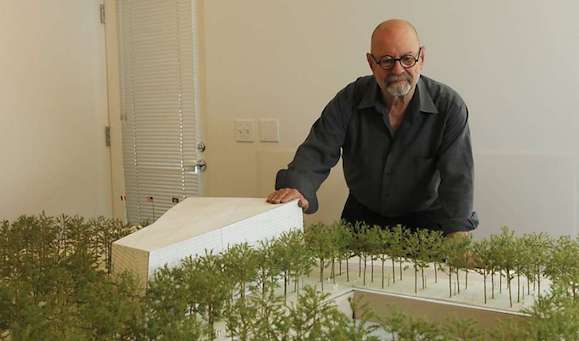 photo of Peter Walker via SFGate

A new Texas art-based award, the Richard Brettell Award in the Arts, has given its first $150K prize to internationally acclaimed landscape architect Peter Walker. Walker is best recognized in Texas for his designs for the Nasher Sculpture Center, the landscape master plan for the University of Texas at Dallas, a landscape master plan for the University of Texas at Austin, Burnett Park in downtown Fort Worth, and is involved in the future plans for Dallas’ Fair Park. Walker will have a residency in Dallas/Richardson at UTD this week and will give three public talks (one has already happened); info on the remaining two talks taking place at the Nasher and UTD, for Wednesday and Thursday, can be found here.

About the new award, via UTD: “The University of Texas at Dallas, with a generous gift from philanthropist Margaret McDermott, has announced the creation of the Richard Brettell Award in the Arts, a biennial honor recognizing established artists in any medium. The award will be bestowed upon artists whose body of work demonstrates a lifetime of achievement in their field. Winners will receive a $150,000 prize and will participate in a campus residency where they will spend time interacting with faculty and students.” For more info, please go here.