If you’re not at the Dallas Art Fair ogling the seven works the Dallas Museum of Art purchased with their new $100K acquisition program, come down to the 30th annual Houston Art Car Parade, today, April 8th!

This year, Art Car Grand Marshal Cheech Marin will lead a procession of more than 250 vehicles along Smith Street while Glasstire’s very own Rainey Knudson and Brandon Zech announce the parade from the VIPit Experience! Stop by, grab a Glasstire koozie, and watch the cars roll and the bikers ride! 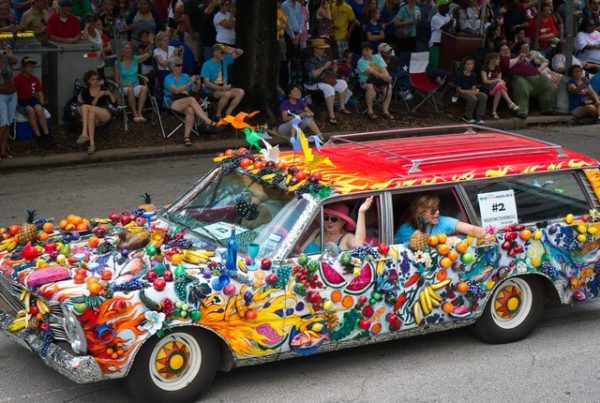 The idea of an “art car” first emerged in Houston when artist Jackie Harris bought and transformed a 1967 Ford station wagon into the “Fruitmobile.” Then, in 1986, Rachel Hecker and Trish Herrera organized a vehicular parade in conjunction with the New Music America Festival. Around 20 floats and decorated cars were involved in this promenade down Montrose Boulevard. After an increasing number of appearances of art cars on Houston streets, the Art Car Parade was born in April of 1988. And the rest, as they say, is history.

Festivities for today’s parade kick off at 11AM with a party at the parade’s starting line. After that, the cars are set to start rolling at 2PM—show up early to get a good seat!