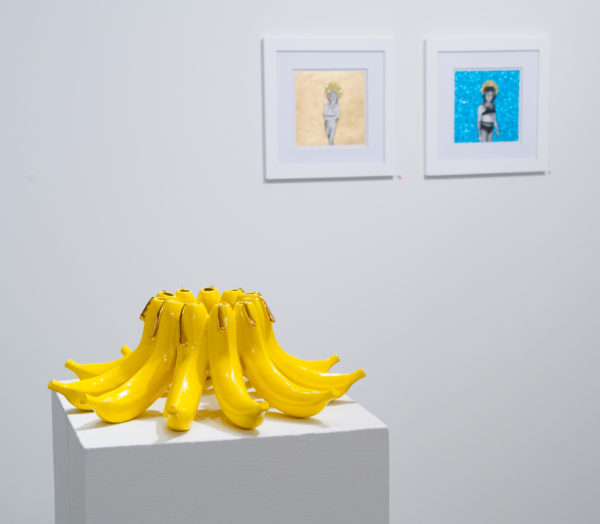 It’s easy to lose yourself among the ceramic cocks and underground gay icons of Wesley Harvey’s show Pretty Hurts at Hello Studio in San Antonio. The dicks are big, bold, and gorgeous. Former San Antonio resident Harvey is mining the history of gay culture to reveal binaries within which celebrate and dehumanize different modes of sexualization.

While employing such theory through art is as relevant today as during the era of the Stonewall Riots, the scope with which Harvey peers into queer life is both neutral and exclusionary. Harvey is deconstructing what it is to be a white gay man, now, in a world where it is no longer the loudest minority, and whose minority status is at times challenged by other queer groups facing layered and oppressed intersectionalities. 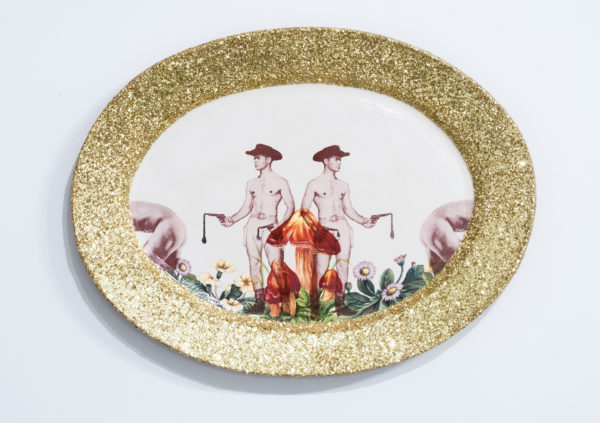 Harvey uses queer semiology of the ’80s and ’90s and touchstones like Tom of Finland and Alexis Arquette, and puts such imagery on domesticated objects (plates, glasses), laying bare the lack of reconciliation from society gays have as normative families living conventional, domesticated lives. To strike deep into the heart of conservative darkness which shrouds this country’s ideas of otherness, the narrative could extend beyond white icons of yesteryear, but that’s not really Harvey’s agenda here.

(Today it seems streaming media, cinema and rap are the artistic channels attacking the alt-right illusion of “greatness.” Right now it’s films such as Kiki and rapper Mykki Blanco who are tearing down old assumptions, built from outside and within queer culture, through refreshing and revolutionary narratives of people of color and non-gender identifying people.) 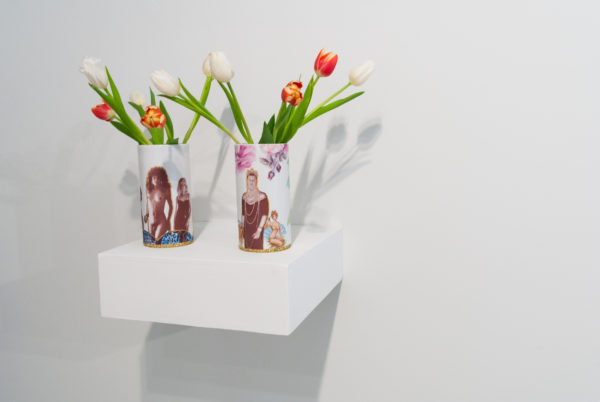 As objects—conceptually and aesthetically—Harvey’s ceramic work and works on paper are truly successful, though I would have loved to have a chance to raise my hand to probe deeper and farther than the show seemed to be willing to go. Circle Jerk Flower Brick serves as an anchor of sorts for the show: a brilliant yellow sculpture of ten bananas, fused side by side, with drips of gold seeping from their tips. It’s a sly and funny take on the celebration of sexual adventure and liberation through group sex. Note, however (and however intentional) the homogeneity of color, shape, and size. This will resonate with some queer-identifying men as a trend, a problem, and a fact. 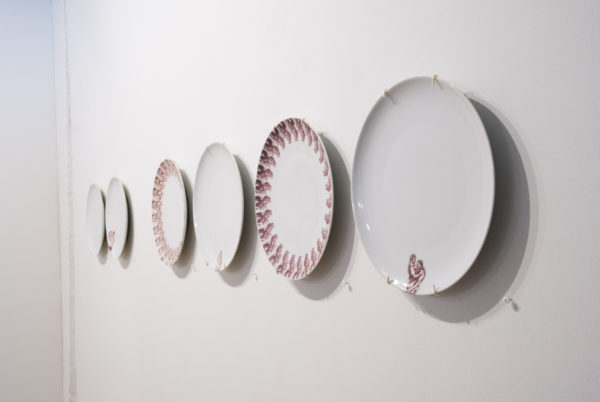 Plates from the Rim Job series.

The intimate setting of Hello Studio and the moderate amount of work in the show allow for thoughtful meditations across each of the pieces and all of its access points. And I’ll admit that it’s the deeper complexities of queer life I was searching for here, which may not be fair. So I’m tempted instead to frame the show as Harvey’s singular experience. Queer artists are elbowing their way into the canon of visual art history. But with the legacy media, cell phones, and social media reminding us of the brutalities queer, trans, and POCs experience daily, I was looking for more references to the existential and physical violence that serves as a reminder of gay life, and I suppose that’s my baggage and not Harvey’s.

Hello Studio in San Antonio is Looking for...