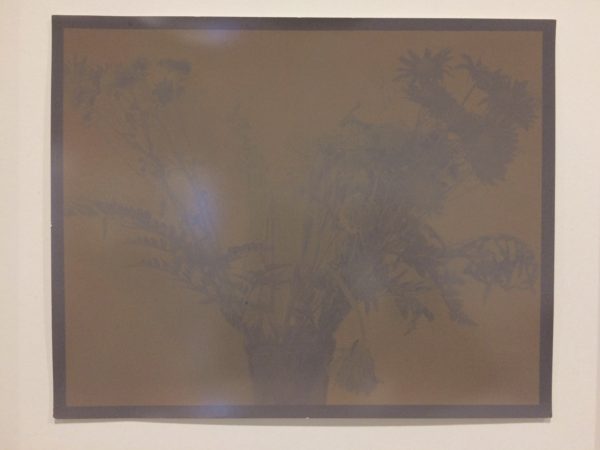 Turning Memory, an exhibition by John Steck Jr. at Blue Star Contemporary in San Antonio, weaves photography with ephemerality. The show is full of disappearing photographs, images that haven’t been processed with the traditional fixer and other darkroom chemicals and are thus even more light sensitive. Over the course of this show the photographs fade, or more accurately, the definition of the subjects brightens to hazy yet electric hues of mauve, turquoise, and creamy pink. Some of the pale forms of a bouquet of flowers and a willow tree are still traceable with the eye, while other photographs like Three rooms that no longer exist and Someone I used to know are almost entirely exposed and have become solid blocks of color behind their frames. By the end of the show, it’s likely that the entire room will be only sheets of color photo paper behind frames, with no hint of the images that were so fleetingly on the surface of the paper. There will only be the suggestion of the title cards next to them. 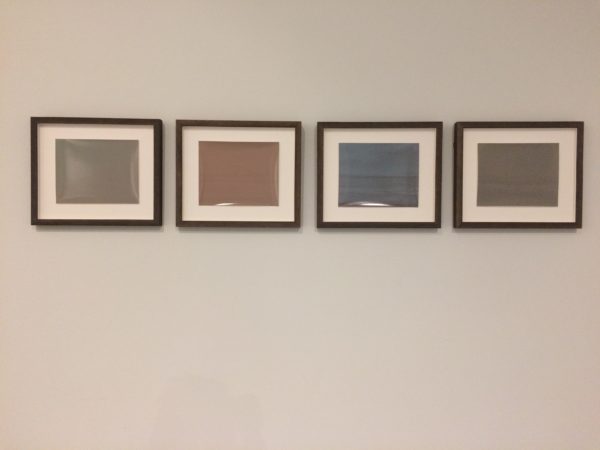 It isn’t just the images that escape the eye, though. It is clear from many of the titles that the subject matter of Steck’s photographs are loaded with nostalgia, as the title of the series, Lament, indicates. Materially and emotionally these are works that act like sand slipping through fingers. Memories fade, and these photographs speak and react to this reality. Their ephemeral nature has something of the effect of Eternal Sunshine of the Spotless Mind, where the main characters willfully erase their past. It is as if we are looking back on a memory and instead of seeing a person or a place, only our distance from it is visible, as the color overtakes form. 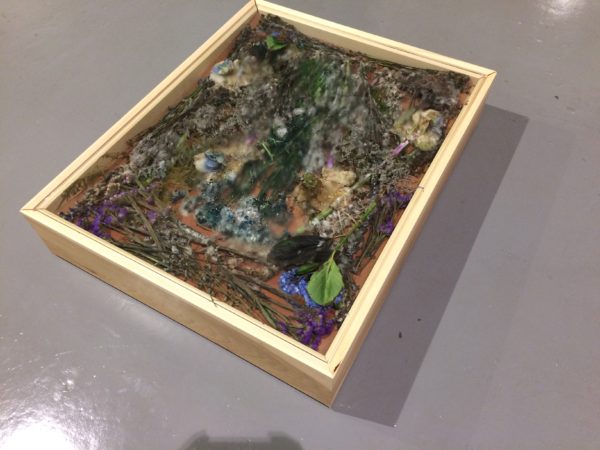 In the middle of the gallery floor are two blond wood boxes filled with striking displays of flowers beneath a sheet of glass, titled Coming up roses. Each box is a photogram, or image created by direct contact with the photosensitive paper, being exposed for the entirety of the exhibition. Trapped by the glass, the flowers are rotting exquisitely. Never has mold looked so lush. Purple and fuschia flowers are amidst blooms of a new kind. Orange and grey mold furs the paper. Condensation swells on the glass, marbling the appearance of the flowers below. Here the trapped moisture creates painterly smears and abstractions that recall the seductive and woozy work of Marilyn Minter. The boxes might be coffins for the stems that were once alive but they are also birthing new kind of growth.These photograms counter the disappearing acts occurring on the surrounding walls, while addressing the very same change that is so central to Steck’s work. 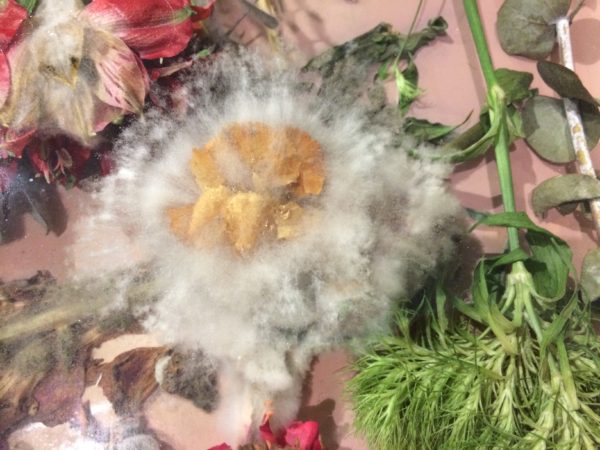 Steck’s photography encapsulates all the mortality, vitality, and inevitability of change. He uses the ontological experience of being human as his prime material in order to force photography to engage with a more nuanced idea of the form and its potential. So often work that is conceptual and formally experimental fails in some department, but these works pack a punch. They are feeling and smart; emotion isn’t sacrificed in an exchange for intellectual rigor. Steck’s work is extending a rich tradition of experimental photography and it offers an exacting kind of pleasure.

Through May 7th at Blue Star Contemporary, San Antonio