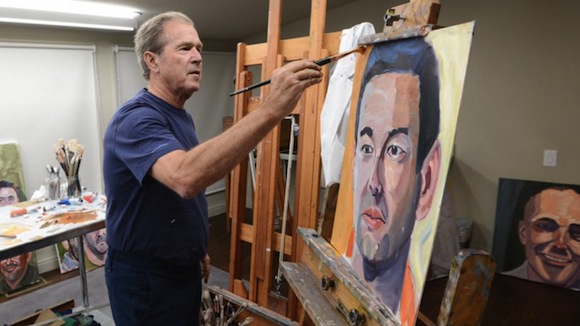 After mixed reviews about his new painting career, former President George W. Bush is unveiling a new book “honoring the sacrifice and courage of America’s military veterans,” which features 66 full-color portraits and a four-panel mural of wounded U.S. military he has come to know. It will be released today, February 28, available on Amazon.com.

At the behest of his newest painting instructor, Fort Worth painter and teacher (UT Arlington) Sedrick Huckaby, he decided to portray “portraits of people nobody knows,” reports The Dallas Morning News.

The oil paintings of the wounded veterans since September 11 were produced by the 43st U.S. president in the book Portraits of Courage: A Commander in Chief’s Tribute to America’s Warriors, and will be included in a special exhibition at the Bush Center‘s museum (open March 2-October 1).

Proceeds from the book go to the George W. Bush Presidential Center, a non-profit organization whose Military Service Initiative “works to ensure that post-9/11 veterans and their families make successful transitions to civilian life with a focus on gaining meaningful employment and overcoming the invisible wounds of war.”