Michael Peranteau to Step Down from Art League Houston 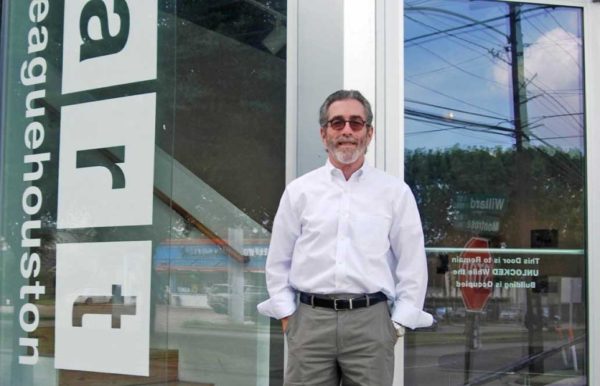 Michael Peranteau, director of Art League Houston since 2012, has announced that he is stepping down in May 2017.

Glasstire spoke with Peranteau on his five eventful years at the organization. Under his tenure, the budget has grown nearly 50%, to just under $900,000 annually, and the Art League paid off a debt of $120,000. Art League was also the first Texas nonprofit to become certified by W.A.G.E., the organization that works for equitable pay for artists. But Peranteau says he is most proud of  the “major demographic shift” in the Art League’s audience. “There was a pivotal point five years ago – Robert Pruitt came to us with an idea for the STACKS show [a series of mini-residencies by African-American artists]. Those shows brought in new people and redirected us. We figured out a new structure for our artist advisory board, and Robert was the chair of the first one. It’s a hybrid system with an open call and our curator Jennie Ash working with a variety of people on ideas for projects and shows.”

The Art League has existed since 1948 and has gone through ebbs and flows of interest and activity. There were periods in the 1980s and ’90s when it was known primarily as a small, sleepy organization running classes for hobbyist artists who wanted a place to hang out and drink coffee together. No longer.

Peranteau chalks up the Art League’s energy and success in recent years to a new generation of visitors: “Young people started coming and they didn’t have any past association with [the Art League]. They only have positive associations with it. It’s really been fun to watch.”

For his part, Peranteau, 65, is looking forward to a break from the nonprofit grind: “I’m excited about transitioning into a world where I’m not responsible for payroll. I want to find out what it’s like not to have the responsibility of maintaining an organization’s budget, and work with artists individually on projects,” he says. He plans to split his time between his home in Montezuma, NM and Houston. Peranteau’s partner Scott Sawyer works at UNM and Peranteau looks forward to spending more time there. But he says he “will keep a toe in the Houston pool!”

Asked about his dream replacement for the Art League, Peranteau says he hopes the organization will find “somebody who does not want to be a curator, but wants to be an executive director, who wants to keep Art League connected with other organizations. When we partner up, it strengthens the community in a million ways. I hope the organization will stay the course in being involved with artists and artist issues.”

Just want to say thanks to Michael for his service and for being open to exploring such new models for audiences and artists! and also might be nice to mention that Michael was also responsible for initiating the Residency and Performance Series as Co-Director of Houston’s ‘Diverse Works’ putting Houston on the National Arts map and becoming an igniting catalyst to a vibrant arts community that then produced so many artists’ opportunities and such models as ‘Project Row House’ with Rick Lowe.