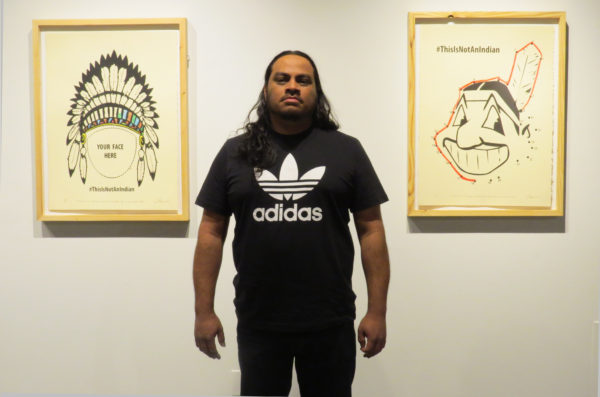 A Native American who was born and raised in Oklahoma, San Antonio-based artist Joe Harjo took up photography while earning his BFA from the University of Central Oklahoma, Edmond in 2007. Working with an old-fashioned analog camera, he enjoyed photographing the nooks and crannies of his neighborhood at night time.

Harjo felt at the time that there were few opportunities to see progressive contemporary art in Oklahoma. So in 2009 he moved to San Antonio to study at UTSA, where he earned his MFA in 2012 while exploring issues surrounding his Native American identity. Over the years he’s looked at representations of Native Americans that appear in books, exhibitions, and museum collections. Frustrated that indigenous people are rarely portrayed accurately and are more often depicted as the costumed other, Harjo’s ongoing mission is to debunk myths and stereotypes. According to the Harjo, “It is as important to say what we are not as it is to define who we are.” And rather than rely on straight documentation, Harjo believes that the best method for engaging viewers—with the goal of effecting social change—is to use humor.

At UTSA, Harjo had access to a state-of-the-art digital camera made available to students. In 2011, he used the camera to create staged night photographs for a series called Indians for Sale (a title play on the Beatles album Beatles for Sale). Shot within walking distance of his Southtown apartment, the photographs show Harjo posed in a number of settings in ritualistic narratives that recall the photographs of Gregory Crewdson, but with a Native American bent. In B.efore I.ndian A.ctivation, the artist turns an old car wash into a sci-fi machine. Standing in the middle of a radiant light burst, Harjo looks as if he’s about to be abducted by aliens or transported to another dimension. The title clues us in on its meaning: By isolating the letters ‘B’, ‘I’, and ‘A’, he refers to the federal Bureau of Indian Affairs (BIA), a governmental agency formed in 1824 that has for many years underrepresented, underserved, and undermined native tribes by policing their lands, actions, and social structures. Only recently, with the inclusion of natives on staff, has the agency evolved from a disciplinary role to an advisory role. 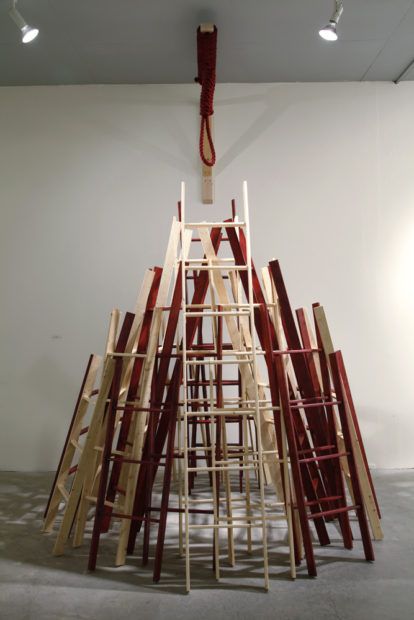 In 2012, Harjo rounded out the Indians for Sale series with several sculptures, including Blood Quantum Physics, a grouping of ladders that he made by hand, arranged in the shape of a tepee, and positioned under a noose dyed blood red. Metaphorically, the construction questions the use of blood quantum policies that determine whether or not one is legally of Native American heritage. As a requirement of tribal membership, those applying for a Certificate of Degree of Indian Blood must be a descendent of a person listed on the Dawes Rolls, a commissioned registry of members of the Five Civilized Tribes assembled in 1893. Harjo expresses in this work that blood quantum as well as take-home DNA tests do not affirm native identity. Rather, he believes it to be determined by “the lived native experience and heritage while living in a complex social structure.” In a related work, Portraits of an Indians Trophy Wall, Harjo refers to the historical displacement and eradication of Native Americans, as well as to the mass production of stereotyped consumer artifacts, with a series of ceramic Native American heads adorned with traditional headdresses and wall-mounted like game hunters’ trophies. 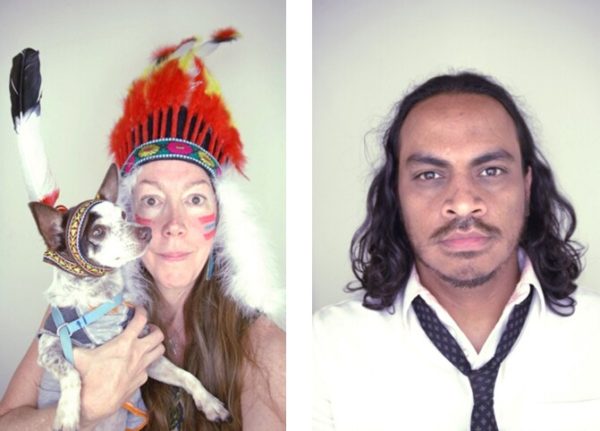 References to traditional Native American garb in the form of costume headdresses and jewelry is the raw material for Harjo’s 2012 performance/installation Five Minute Indians. For the installation component, Harjo hung stereotypical clothing, adornments, and toy weapons on a wall, along with printed instructions inviting visitors to use these props to dress up like an “Indian” and be photographed in an adjacent photo booth. At 15-minute intervals, Harjo, dressed in everyday clothing, would himself intervene by changing into outfits from his own wardrobe (he cycled through all of his own clothes) and snapping a photo-booth picture. With the printed photos, Harjo compared and contrasted his real-life appearance with the ludicrous stereotypes that have been perpetuated over generations through the media. 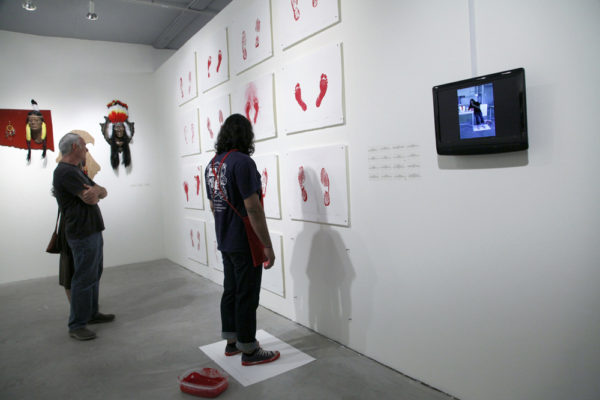 For a related project, Harjo created the series Indian Performance Prints using impressions of his feet or shoes, which he first dipped in red paint in reference to the slang pejorative “redskin.” He made the prints while engaging in mundane activities such as taking a shower, browsing Facebook, drinking a Coke, and watching pornography. In conjunction with their debut at the former UTSA Satellite Space in 2012, Harjo made two new ones and labeled them Indian Standing in the Exact Spot Looking at Contemporary Native American Art I & II. 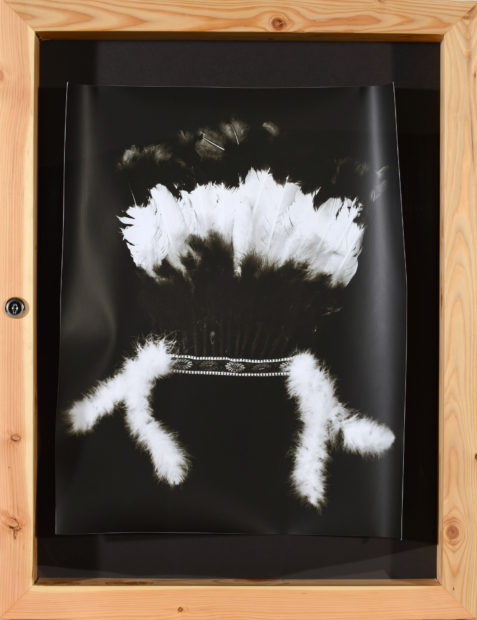 In 2014, Harjo began his photographic series #ThisIsNotAnIndian, which includes images of cheap costume jewelry and wearables presented as museum artifacts. Housed in locked museum display cases, these photographs of stereotypical “Indian” adornments commonly found in Halloween aisles take on the role of vintage relics, shot in black-and-white and curling at the edges. Adding to the irony of the museum-like presentation, the accompanying fine print labels attribute each object to a ‘tribe’ by listing the name of a manufacturer such as Funny Fashion or CostumesUSA. Origin or region is most often noted simply as “Made in China.”

In addition to photos of faux artifacts, the series #ThisIsNotAnIndian includes staged tableaus that are inspired by settings that Harjo has happened upon. Fancy Dancer II, for example, is staged to complement the wall of a building that the artist noticed had been tagged with the word “skunk,” which was his nickname as a child. In reference to traditional dancing performed in full-feathered regalia, known as “fancy dancing,” Harjo has photographed himself in front of the graffitied wall breakdancing in street clothing, with friends performing backup.

Happenstance also plays a role in Harjo’s ongoing series @NDNSTAGRAM. Since 2014, whenever he comes across a stereotypical “Indian” decorative motif as he goes about his day, he becomes a stereotypical “Indian” by sending out an Instagram photo of himself merging with the decoration to create the illusion that he’s wearing it. To counter pop-culture stereotypes, he appears performing such common tasks as swiping his phone or ordering pizza. 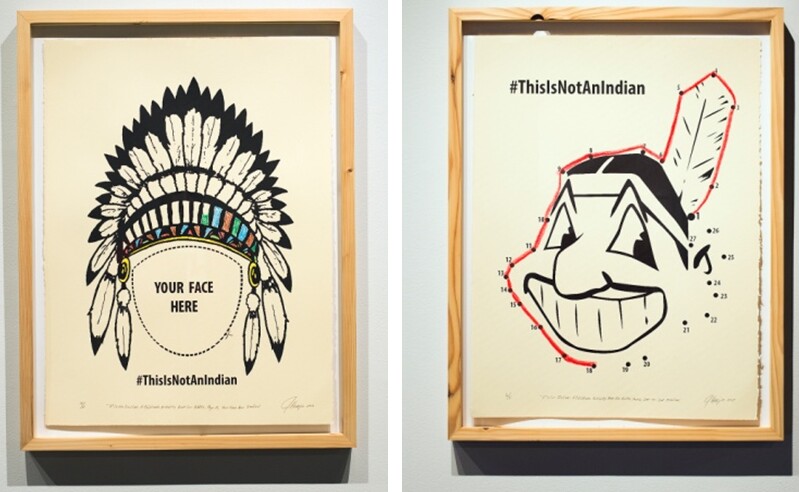 For his latest series, “I” is for Indian: A Children’s Activity Book for Adults, Harjo calls attention to the fact that racist stereotyping can be taught to young children through widely available coloring books or games like Connect the Dots. While his familiar hash tag #ThisIsNotAnIndian appears next to the imagery (and recalls the similarly ironic use of language in Rene Magritte’s This is Not a Pipe), this pictorial additive infuses the image with a forceful political bite.

Recent works by Harjo are currently on view in San Antonio at the Southwest School of Art through February 26, and Blue Star Contemporary through May 7.