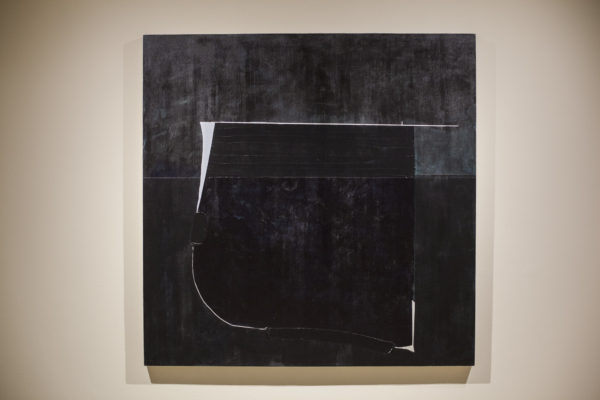 My Mind is Clear of Fear

These paintings have to be viewed in person. The New York-based Torkwase Dyson’s chromatic black acrylics sheen, crinkle, and almost tear away from their wooden host. The blackness of the large paintings can be overwhelming. Walking through the show at the TTU Landmark Gallery, I find myself reading the work through the lens of “blackness (as) a conceptual paradigm,” best explained in Adrienne Edward’s essay “Blackness in Abstraction.” While Dyson’s smaller ink and gouache works on paper convincingly punctuate a gallery wall, the large painting throughout dominate, and affirm that the work is about “the individual’s power to expressly inhabit and negotiate freedom in special changes,” as stated in the exhibition materials. 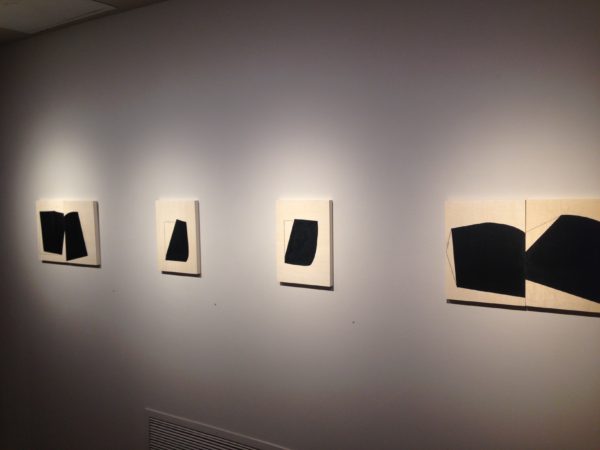 As seen in Above and Below, line work functions less as an architectural framework and more like a cosmological diagram. Contrary to the conventional heaven-earth-hell cosmogony layers, Dyson’s version of under-earth or lower layer functions as a refuge. In old European painting the ubiquitous ‘last judgment’ of artists like Hans Memling’s (circa 1470s) depict the lower portion of the image as hell. But Dyson’s cartographing reads more in the Mesoamerican tradition of the cosmos, as in the Cosmographic Stela at Izapa, with the surface of the earth denoted as a band or line and a tree acting as intercessor between a sky band and underworld. In Dyson’s work, what can at first read like a box or barn also reads as the surface of the earth, with ill-defined space above, and a wealth of considered space below. And in the tradition of the Popol Vuh or Hercules, Dyson’s heroic action is occurring below the surface of the earth. 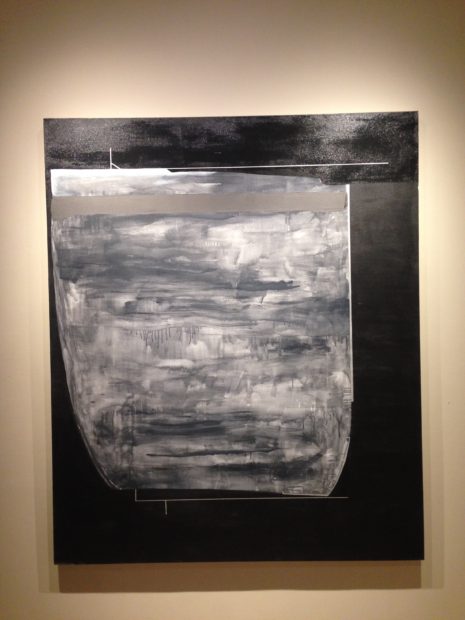 I almost wish I hadn’t read about this exhibition before I approached it, because at first I struggled to move away from the idea of cellars, or hulls of ships, or other spaces in which slaves would have hidden away or been forcibly stowed. This is part of the intended reading of the work, yes, but Dyson’s diagramming of above, on, and below moves well beyond anecdotal individualized narrative and begins to reframe the way we consider the very hierarchy of space. There is no heaven and hell in her diagram, only the seen and unseen. She subverts the taxonomy of inhabited spaces, and in this way, the act of occupying space is a political act, and it’s powerful. 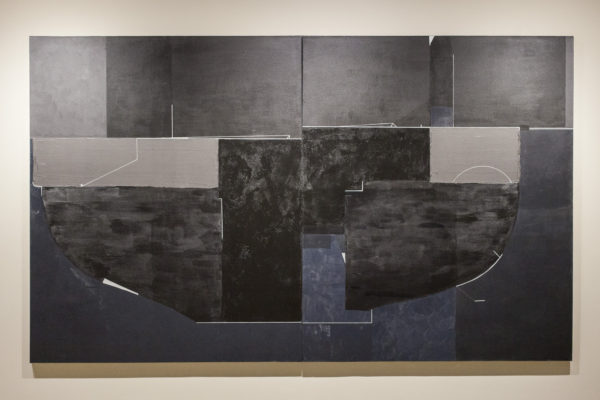 The most sumptuous, arresting piece is Black Interiority, the first piece you confront in the show. In a revelation of composition, subtle color bias and shifts, and the thickening and thinning of lines and materials, this piece reads as a  map—not in appearance, but in function. It delivers visual and conceptual information, and yet no obvious key.The viewer becomes the private witness to its strength and beauty as a third party.

As a painter myself, I imagine Dyson’s creation of My Mind is Clear of Fear—the finishing massive stroke of black paint that seems to seal off the silver opening of paint. And perhaps that’s it: Dyson is showing us a history, a diagram of the world, but not allowing the viewer to fully enter into that space. The politics of freeing yourself may be born of group effort or protest, but Dyson shows us that the subversion and question of fixed systems like architecture, the cosmos, and authority is highly personal. So I close as I opened: You need to see this work in person.

At the TTU Landmark Gallery, Lubbock, through March 5th. (Photos by Hannah Dean and Ryan Shelburne.)

This article originally appeared in slightly different form in The Bowerbird, an art blog in Lubbock, TX.