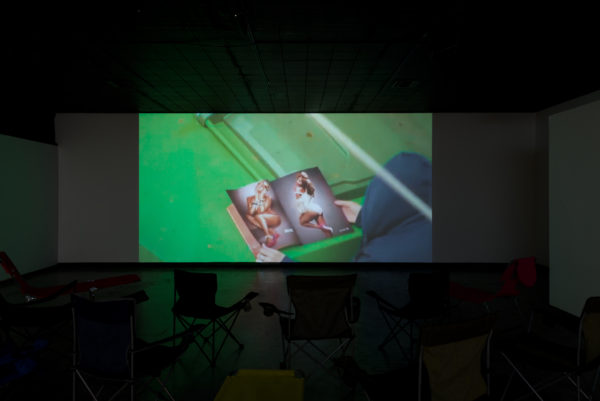 Liz Rodda’s sparse show Heat Loss at Women and Their Work in Austin tackles a breadth of contemporary issues with just three videos and two images. Her video work appropriates found footage that she spends months looking for, and marries it with found audio that she manipulates (slowing it down and sometimes layering it with other ambient noise) from a separate source that further complicates or alters the meaning of the video. Because of the form, it’s easy to feel that Rodda’s work is oblique, and yet the name of the show is apt. The work is pulsing around areas of popular debate: race and identity politics, sexual exploitation, artificial intelligence replacing human jobs, and the loneliness of what are all too often shallow lives.

In Zoom Test, a camera fixes on a hooded man on a sidewalk flipping through Black Men magazine, and encroaches on the view over his shoulder as he steadily turns the pages—never lingering long—of images of bodacious women wearing bikinis and matching underwear and bra sets. If you encounter the video as I did, midway through its loop, it’s startling when, at the end of the film, the camera backs away from the man, returning us to the perch from which the camera rests and is ostensibly testing its lens. The voyeurism of the camera materializes differently after its true watching distance is made apparent. It is in this zooming out that the intrusion is most palpable.

We, the audience, are watching someone with a camera watching someone else consume sexualized images of women. And less directly, we’re watching Rodda watch the video, and also seeing through the eyes of the photographer who took pictures of the women in the magazine. We are seeing through so many lenses and types of voyeurism that it feels impossible to parse the ethics of it all, and the work addresses this tension.

Further complicating the work, the audio Rodda pairs with the video is philosopher Jiddu Krishnamurti discussing the importance of seeing things objectively, without imposing our preconceptions, associations, or judgment. “One of our greatest difficulties is to see for ourselves really clearly,” he intones. He invites us to see without our mind, to acknowledge that words create images. He says, “We generally know beauty through comparison,” and beauty requires self-abandonment. The audio is passive and indifferent. Krishnamurti’s tone has none of the vigor that usually comes with such a hot-button issue as the exploitation of black female bodies. The friction of the video exists in the intentional discord between the contentious video and emotionless audio. It’s as though the combined impact of the audio and visual has become something that insists on deflecting our gaze or judgement, and it’s unsettling.

When I meet Rodda to talk about her work, she tells me the story of a serious accident she was in when she was in high school and reveals that much of her face had to be reconstructed through intensive surgeries over the course of a decade. To my eye, she is a beautiful redhead with big blue eyes and high cheekbones; to me the only noticeable trace of her accident is a scar near her mouth. On her Facebook page, she tells me, she usually only posts pictures of people that she resembles, and that she won’t look at pictures of herself before her accident. I can’t help but feel like the deflection she sets up through Zoom Test is at least partially explained here.

Krishnamurti’s audio could liberate us from the snags many of us feel as we look at the video. But objective looking feels impossible even with Krishnamurti’s guidance. My experience as a white, queer, educated female inevitably alters how I see the work, and I imagine that watching the video as a male, or a person of color, would be far different. Who are you, the viewer, relating to most in the viewing? The women in the magazine, the man flipping through it, the voyeuristic camera operator, Rodda herself? One could always alternate sympathies. The constant bind set up by Rodda is unusual.

In front of the projection of Zoom Test are scattered folding camp chairs. She’s allowing us to sit with our apprehension, and we might remain long enough to realize that it’s impossible to look at this work in the way Krishnamurti is recommending, which is quite similar to the ‘disinterest’ that Kant writes of in The Critique of Judgment. 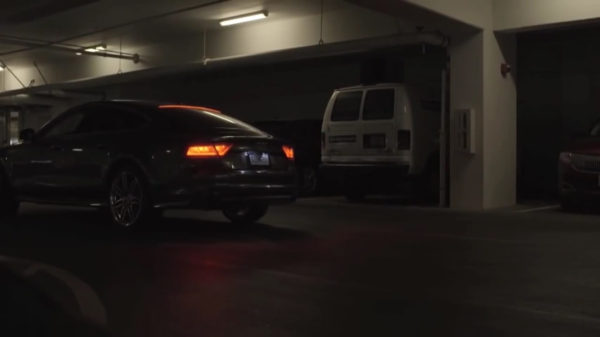 Zoom Test is the most loaded piece in the show, but Rodda’s other videos here nonetheless heighten a sense of what she calls “collective aloneness.” First Freedom follows a self-driving Audi as it navigates a parking garage, the wheel flailing around but nevertheless guiding the car into a parking space with precision. Meanwhile the audio talks about solitude; a depleted-sounding voice says, “I notice the rain when I’m alone,” and it sounds like the speaker is weary, and attempting to convince herself of the poetry of the world.

Turn Your Face Toward The Sun begins with a young woman’s voice saying, “Hey guys, it’s Ashley,” and, as with countless ASMR audio tracks, goes on to offer affirmations, motivating quotes (or platitudes, depending on your perspective) that she whispers, like “Now is right on time” and “Never make somebody else a priority if they only consider you an option.” The camera pans over aspirational poolside still lifes of towels, sunglasses, and bathing suits draped just-so over chairs, zooms in on chicly decorated interiors to focus on a single glass of whiskey on the rocks placed just-so on top of a coffee table. The smack of “Ashley’s” chewing gum slyly cuts the poignancy of the title quote when it finally arrives: “Turn your face towards the sun and the shadows will fall behind you.” 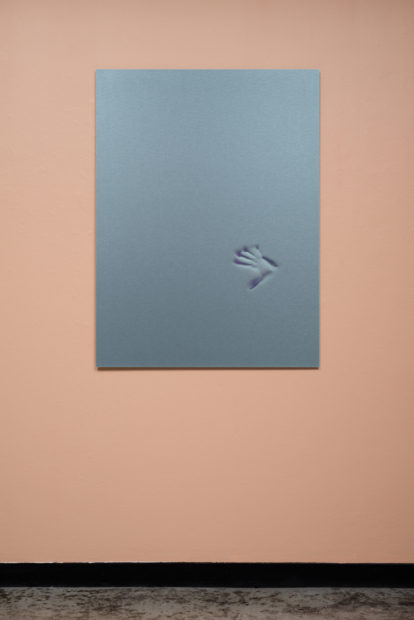 The videos overall convey a sense of hollowness; they are strange echo chambers of solitude. And they show us a dodging and burning of appearance and authenticity. Rodda’s two photographic prints offer an antidote: both depict handprints, made by the direct contact of a hand pressed into the foam of the cushion of a folding chair, and into memory foam. Here you can feel the exit whoosh of warmth—the heat loss that the show title refers to. Ultimately, Rodda’s latest work is about the difficulty we have in dealing with—in effectively processing—absence, removal, and vacancy. The eerily empty yet impeccably decorated interiors, the monotony of the car steering itself without a human passenger, and the cold movement of the camera as it watches someone look at erotic images—all seek to reconcile the loneliness of our present paradigm.

Through March 2 at Women & Their Work, Austin. Photography by Colin Doyle.