In the Beginning was the Touchdown: God Comes to Houston to Play Some Ball! 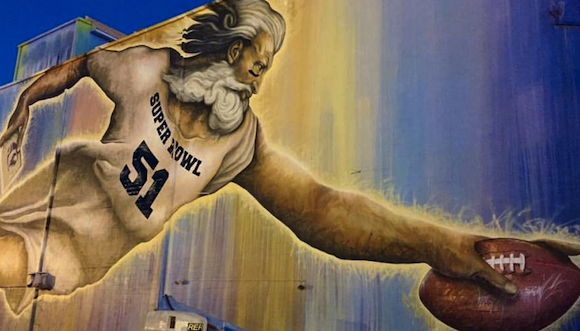 Most Houstonians have seen Midtown’s “biggest mural in Houston,” Preservons la Creation by French-American artist Sebastien “Mr. D” Boileau. A riff on Michelangelo’s Sistine Chapel ceiling fresco, God is shown with a can of spray paint and is meant to further “the discussion of conservation and preservation.”

But temporarily, God is not shown creating the first man on earth, nor is he depicted capturing the transitory nature of graffiti art. For the time being, he’s just catching an awesome pass in honor of the Super Bowl.

The mural will return to its previous state after Super Bowl LI (scheduled to be played at NRG Stadium in Houston on Sunday, February 5), reports The Houston Chronicle.

This mural only deserves attention to point out the mediocrity of Houston’s “street art” for hire scene with downtown management district’s, in addition to what other crappy partner, contributed to this sad “artwork”. When people that know nothing about art, hire people who will paint anything for a dollar, this is what you get. And the dumbing down of our city is happening one terrible mural, and one mayor’s office of cultural affair’s work at a time.

Did they end up putting that football helmet and jersey on the Sam Houston Monument in Hermann Park?

As far as I know the Downtown Management District nor the MOCA funded the temporary alteration of this project. Those that funded it originally are acknowledged on the mural. From the Houston Chronicle mention, “Boileau partnered with the Texan-French Alliance for the Art’s “Open Door” project and the Midtown District to produce the mural.”