The Power of Refusal: Kevin McNamee-Tweed’s Departure from Austin 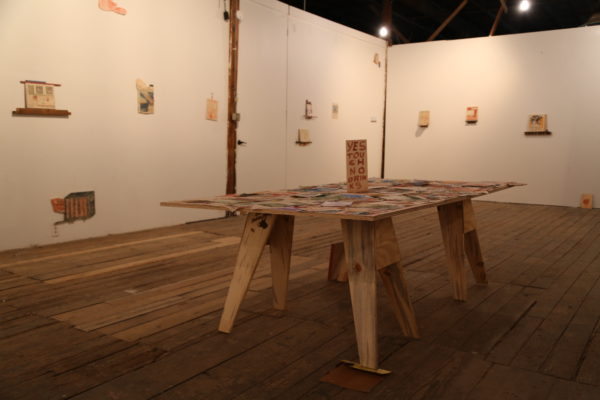 In his latest show at the Museum of Human Achievement (MoHA) in East Austin, Kevin McNamee-Tweed shows 369 monoprints inspired by his travels. Titled Self-Tourism, it’s scattered with narratives that oscillate between tranquility and calamity. The perspective moves from churches in Norway to a small town in Nevada where a mountain lion prowls Main Street; from brownstones in Chicago to a lone cabin terrorized by fiendish blobs that might be wolves. Between all the stories there is some steadiness. One scene makes several appearances: a view of a room with three windows, a space heater, and a table, atop which rest a candle and an open book. 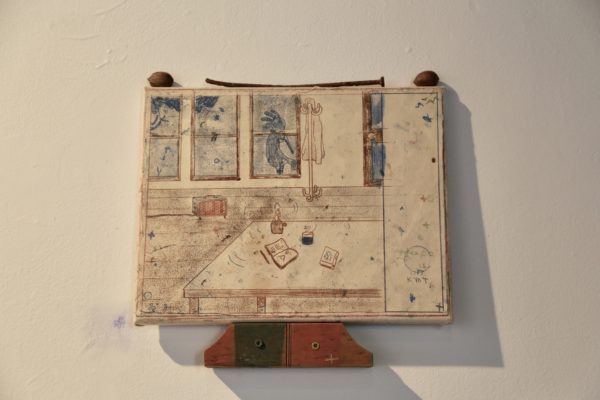 Untitled, 2016, monotype mounted on canvas on shelf with pecans and nail. Photo by Ayden LeRoux.

The prints are dusty tones of red, green, blue, yellow, and brown, and McNamee-Tweed’s hand leaves smudges and soft marks that make some of the scenes hazy. His style recalls David Shrigley, but rather than a crisp black-and-white palette, McNamee-Tweed’s peculiar drawings add a fog to the fatal and strange scenes he depicts. “Mistakes happen in ways you have no power in,” he says as he discusses his foray into this kind of printmaking. He talks about the freedom of losing control while trying to write backwards for the monotype process, giving up, and letting things be wrong. The prints that contain architectural components are particularly satisfying in McNamee-Tweed’s stilted style. The geometry of a ladder leaning against a wall, the repeated imagery of windows, the angles of perspective for a storefront neighboring a wall covered in the word “graffiti” (not graffiti itself; a subtle nod to René Magritte’s The Treachery of Images). His images of clothes, hangers, and coat racks also appeal; his rudimentary style crystallizes as he approaches the way soft garments drape over stiff forms. 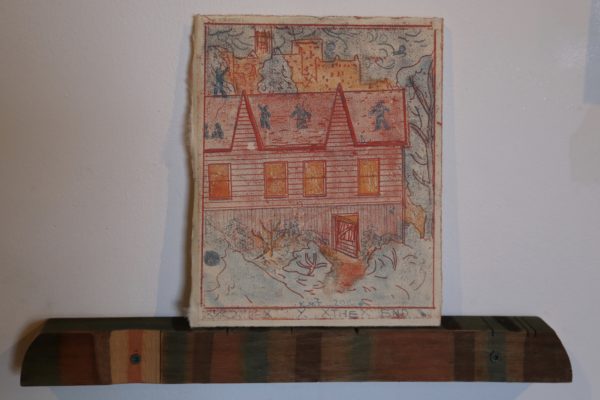 The invitation to try a new form for this show at MoHA hasn’t held McNamee-Tweed back from creating a flood of work. He says he tends to “find a system and just plow,” and the work seems unsystematically placed on the walls of MoHA, sprawling from down near a power outlet close to the ground to up near the top of the white walls of the gallery. McNamee-Tweed claims frames are “greedy,” and as such, his images are propped up on dowels, paint stir sticks, and other scraps to create makeshift supports that splay across the wall and eschew the paradigm of squares and rectangles. These support mechanisms act as extensions of the work, covered in colored stains that share his diluted palette. Italian coins, unshelled pecans, pine cones, and nails rest atop the pieces, too, as if to couch them in their own materiality, to save them from being flat. Aside from the pieces on the walls, McNamee-Tweed is happy to let the majority of his prints sit in a heap on a table made out of saw horses, and let guests thumb through them in the center of the gallery. Frames would make this tender work falsely precious—would serve only as a cage, keeping at bay the gentle humanity of it. 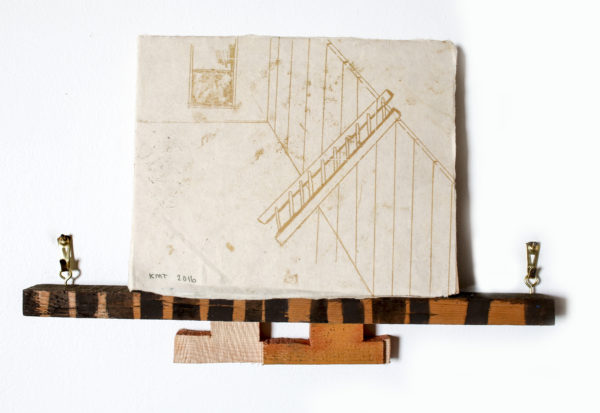 The sheer quantity of the work is important. McNamee-Tweed assures me that 369 is not an exact count, joking, “It’s probably actually 368.” He admits he likes to mythologize the number of pieces in a body of work, and it is apparent from his previous projects like Rocks, Books, and Flyers that volume matters to him. The inundation is aiming for something. The sensation of looking at this work is like reading a narrative without a start or end point. Travel generally entails a destination, but with Self-Tourism there’s no ultimate arrival; only movement—continuous, coursing movement. It is fitting that McNamee-Tweed is leaving Austin by showing us all the other places he’s gone. The absence of Austin’s appearance in the images is felt. 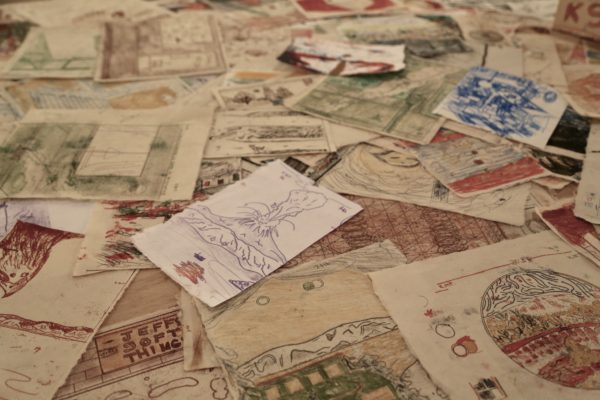 On the surface, Kevin McNamee-Tweed’s work aestheticizes clumsiness and has the palpable tone of a trickster (Kokopelli appears often). But McNamee-Tweed’s distinctive, untechnical style isn’t simply meant to entertain. There’s complexity and a certain loftiness to the comic who stays quiet while the audience laughs; it is the power of refusal. What’s beyond the humor? The surface of jubilant play and imperfection in McNamee-Tweed’s work gives way to a more existential bleakness. Fire makes many appearances: candles, flames licking a house, volcanoes. The heat appears peaceful until the tension of its potential destruction sinks in. The more time you spend with it, the more McNamee-Tweed’s work embodies the simultaneous chaos and calm of the natural world. He punctures the pretension of the art world with a balance of fatalism and earnesty. “Humor is not a sustainable thing. It leaves the work and you’re left with…,” he trails off for a second, “…the redemptive nature [of] catastrophes.” He offers the example of losing your house to a fire, saying it’s a tragedy, but that it also “sets you free. It’s easier to make out the shape of meaning.”

‘Self-Tourism’ is up until February 10th at the Museum of Human Achievement in Austin.

This and That: Rearview Mirrors