The Twisted Manifesto: Rules for Making Art in End Times 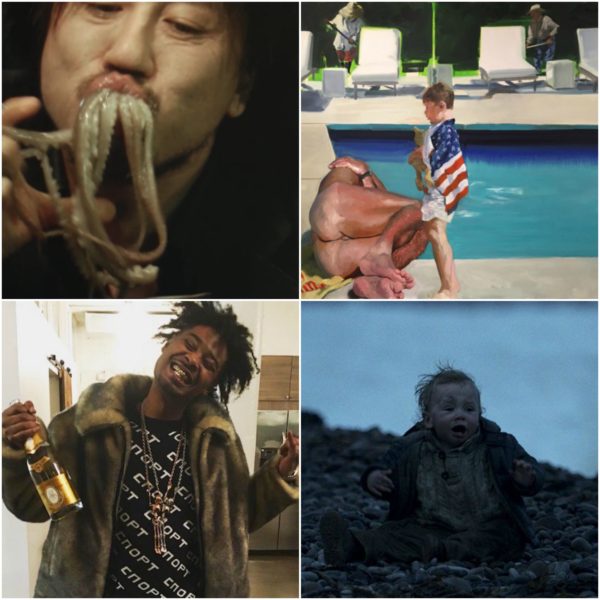 Sometime in 2016 I began using the word “twisted” with an alarming regularity. Perhaps this was brought on by moving back to San Antonio, the site of my all-time favorite eavesdropping experience. Around 12 years ago I went to a matinee by myself, and the adjacent auditorium was playing one of the Saw sequels—you know, those cut-rate gore-fests, where a little puppet that looks like Sheldon Adelson riding the Playa at Burning Man torments a bunch of interchangeable hunks. As I was leaving the theater, a couple was also exiting the Saw sequel and the boyfriend sighed in a kind of sheepish exhaustion, muttering: “Damn, that little puppet was twisted yo… .” Maybe it was the generally twisted quality of world events in 2016: hellish heats, mass extinctions, jingoisms and genocides, along with the sweeping, global empowerment of sweaty-browed, red-faced, braying mad men. Whatever the reason, I began to relish using the word in conversation, finding it deployed in tabloids and song lyrics like some nefarious code (next time you’re in a grocery checkout, pan across the headlines: “Inside Brad and Angelina’s twisted marriage”; “Behind Kanye’s Twisted Breakdown”…) and I actually, on more than one occasion, started watching some fizzy indie comedy only to stop it a few minutes in, grunt to myself “not twisted enough,” and put on Ben Wheatley’s scabrously terrifying masterpiece Kill List.

What exactly do I mean by “twisted”? The word has been debased due to its co-option by rap-rock and juggalos. It is now woefully synonymous with Insane Clown Posse, Slipknot masks and the illiterate eponymous band Twiztid. But it is a shame for the aesthetic universe of such a magnificent word to be clutched in the whippet-dusted, husky paws of a perma-faded crunkcore rapper. What I refer to when I use “twisted” is art that casually, bracingly depicts the depravity and cruelty of existence with wryness, elegance and awe. The works of Werner Herzog and Stanley Kubrick are almost the platonic ideals of twisted art; so are Stravinsky’s Rite of Spring, the works of Basquiat and Maya Deren, and the music of Kool Keith. Obviously, much great art is definitively un-twisted (e.g. Agnes Martin or the films of Eric Rohmer), but faux-twisted art is almost always bad. The works of the Korean master Park Chan-wook (Oldboy, the Handmaiden) are spectacularly and authentically twisted, with a Grand Guignol sense of camp and horror; the leather-jacket, phony intellectualism and lazy brutality of Alejandro González Iñárritu (Birdman, The Revenant) are faux-twisted. Another example: Kara Walker’s icy and unflinching A Subtlety is twisted; Damien Hirst’s glumly sophomoric and tiresome embalmed animals, the literal window-dressing of cokehead mansions, are faux-twisted.

Twisted art is what I want right now. Twisted art in deranged times makes sense; it has a calming, almost Zen logic. One can breathe easy; the world really is a Bosch painting. Over the last year, I’ve been reflecting on the commonalities, the tenets of twisted art across media, and the result is this manifesto of sorts. Think of it as a self-help guide to making your creative endevaors properly, righteously twisted.

Rule #1: Vanity is the greatest sin and the diametric opposite of twistedness. Vanity is corniness.

In Marc Maron’s interview with the witty Mike White (Chuck and Buck; Enlightened), White comments that Matt Damon’s creating a character in Good Will Hunting who was supposed to be basically the smartest person in the world, and then casting himself in said role, was a breathtakingly vain and embarrassing move. If the primary impetus and motor of one’s creativity is to cast a cool and attractive glow on oneself, one is less an artist and more a pickup artist, “peacocking” for the world, whose works are functionally and spiritually indistinguishable from Zippo tricks.

Consider the worst album of the year, Drake’s monstrous Views, the Be Here Now of 2016 rap, as slick and bloated as the dirigible Drake probably takes Hooters waitresses up in for scenic tours of Toronto catered by the Cheesecake Factory. On the record, Drake assumes an egregious Jamaican/Caribbean patois that makes Bono’s florid Rasta gurgles during his Bob Marley Rock and Roll Hall of Fame induction speech sound like Lee Scratch Perry.

Conversely, the near-best album of the year and certainly the most twisted, Danny Brown’s Atrocity Exhibition, makes no such absurd pantomimes to cologne-wafting ruggedness. It’s a brutal, deeply unglamorous album, filled with confessions of impotence, tedious drug binges and the quicksand bleakness of struggling to “be” an adult. But there’s an exhilarating freedom to Brown’s lack of vanity, a freedom that turns into grace, akin to the standup specials of Richard Pryor and the recently departed legend Carrie Fisher’s Postcards from the Edge.

Rule #2: One does not need to embellish or invent excessively—the truth and the world are twisted enough.

True Detective Season One perfectly contrasts the truly twisted with the faux-twisted (by contrast, True Detective Season Two was essentially a “dark” Mark Knopfler song that was eight hours long). The first four episodes are energized and humid: there’s the glorious, machete-wielding gas mask man wandering in slow motion as if lost and trying to find his way back to a Tobe Hooper movie. But the last few episodes descend into a meticulously composed “evil” Southern Gothic tableau that skirts dangerously close to the aesthetics of the Korn Family Values 1998 tour. The problem is that the finale feels consciously invented and exaggerated; you can easily imagine writer Nic Pizzolato scrawling in a moleskine journal, “What is the most fucked up thing you can imagine?!?!?” I mean, if villains like those in the finale’s climax do exist in real life, they certainly don’t have that many creepy stuffed animals. In any case, such theatrical whimsy was utterly uncalled for; Louisiana is a member of the holy trinity of twisted US states (with the other two, obviously, being Texas and Florida). There was undoubtedly some real history Pizzolato could have referenced that would have actually stung.

An example of this principle in action: I recently read the terrifying and hilarious Blitzed, which chronicles the Nazis’ ferociously aggressive consumption of extremely pure uppers and opiates. At once I realized that every WWII movie was a lie, depicting Nazis as icy, calculating ubermensches, when in reality many were constantly sweating and screaming from taking highly potent capsules of meth. Hitler was such a junkie that he received multiple injections per day of a cocaine/meth solution, which he was fond of taking before doing shriekingly loud and grating impressions of various machine guns for hours on end. That’s considerably more twisted than any Hitler rant that fedora bro and noted tequila enthusiast Quentin Tarantino dreamed up for Inglorious Basterds, no?

Rule #3: Do not sentimentalize the past with nostalgia. The past was twisted.

This is a fairly straightforward rule. Why are almost all bands of white people who make music in some facet of the “rock” sound exhausted and irrelevant now, as if, regardless of the age or genre of the band, they were all booked for a tan-pants blues day festival at the Shock Top Brewery? Probably because the beloved music of the ‘60s-‘80s is so intrinsically associated with the style, personalities and history of the time that it’s very difficult to be influenced by it without a gauzy reverence. Why is almost all explicitly nostalgic visual art—like, say, paintings of boys in sailor hats playing in Marram grass at the turn of the century—relegated to galleries adjacent and nebulously connected to a murder-mystery dinner theater? Because nostalgia is necessarily sentimental, and sentimentality is necessarily square.

We all love the past. It looked awesome. People had gorgeous cabinet stereos, and when they built a new building, it was nice, instead of a stack of Pontiac Aztecs like we get now. But it was also limitlessly cruel and desperate. The films of Todd Haynes are illustrative of how to balance an appreciation for the beauty of history with an awareness of stubbornly entrenched institutional brutality (cf. Far From Heaven and Carol).

Let’s consider two celebrated enfant terrible heartthrob male video artists: Matthew Barney and Ryan Trecartin. Barney’s Cremaster cycle was a genuine event in the early 2000s, one that, as a pretentious freshmen twerp, I completely fell for. A mixed-media extravagance of film, painting, literature and performance, the highly psychedelic Cremaster cycle was like if a Jodorowsky movie was turned into a ride at Universal Studios except it wasn’t very fun. How the fuck do you cast Norman Mailer as a magician and still make the experience come off as grimly solemn as Carl Dreyer’s The Passion of Joan of Arc? Barney strikes me as one of those really handsome creative dudes like Tom Ford who has zero sense of humor. And without humor, no matter how “fucked up” and unsettling your vision is (Cremaster has some consciously provocative gore), you are elementally unhip.

Trecartin came to prominence about a decade after the Cremaster cycle and his films are like a David Lynch-directed reality TV show watched at 2x-speed.  They are exhilarating and hilarious, they make you laugh and hyperventilate at the same time, but they are also profoundly unsettling—a highly articulated distillation of contemporary mania and fear.

Rule #5: Present one’s vision unvarnished and clear-eyed. Do not be seduced by faux-twisted stylistic accoutrements.

I call this the slow-motion bullet casing rule. You know how in action movies to make a scene more, like, “hatchet to the dome,” they’ll show, in slow-motion, the bullet casings popping out of the chamber of a gun? It’s a staggeringly wanky flourish that is almost psychotically ubiquitous. I’ve probably watched over four hours just of bullet casings in slow-motion. Such useless and shabby seasoning is a siren across media: in music an overuse of a gizmo prone to gimmickry (autotune, vocoder, mellotron and the like) and in painting an indulgence for lacquers and seals (shouldn’t all those expensive dolphin paintings in upscale malls have a little charm, like an intricate customized van paint-job based on A Wrinkle in Time? No, they do not, because they’re entombed in a glitter lacquer).

It can be scary to hold a frame without blinking, because this move makes any potential flaws in one’s work come into clear focus, but all of my favorite movies use steadicam, and all of my favorite albums sound better on vinyl. Consider the most devastating scene from the best film of the century thus far, Jonathan Glazer’s Under the Skin. A toddler’s parents both drown in the frigid Scottish sea, and the toddler is left alone. Glazer freezes for a merciless ten seconds on the child’s pure horror, conveying the primal fear of existence and abandonment better than anything I’ve seen elsewhere. As George Orwell says in his 1946 essay: “To see what is in front of one’s nose is a constant struggle.” To present a vision that includes the unsparing realizations from one’s life, from life in general, is a constant struggle—it is quite literally twisted. And thanks be for that. If it weren’t the case, we would just keep going in circles.

Makes more sense than most anything I have read about art.