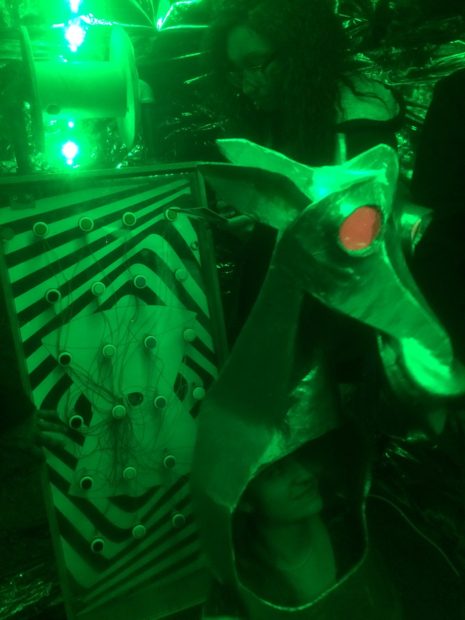 Yesterday, The Idea Fund announced 12 new grantees that will receive funding throughout 2017. The jurors for this round were Julia Bryan-Wilson, Associate Professor at the Department of History of Art at University of California, Berkeley; Dennis Nance, artist, Curator at Galveston Arts Center and 2015 Idea Fund Recipient; and Lu Zhang, Deputy Director at The Contemporary, Baltimore.

The fund received 93 applications from individuals and collaboratives working in the greater Houston area. A total of $51,000 will be given to the selected artists. Grants are broken down into three levels:

Nick Barbee’s Artist Lending Library (A.L.L.) provides a service to artists and fosters art appreciation. A.L.L. was designed to broaden and diversify art collecting by significantly reducing the cost of bringing original art into the home. The economic threshold to collecting prevents artists from connecting to an audience. Patrons typically invest thousands of dollars into purchasing, displaying, and insuring art. While this model has its benefits, it also leads to art becoming a symbol of status and wealth. By removing the economic hurdle of purchasing, we foster a community of new art patrons.

WAKE (Lauren Eddy, Jorja Montgomery, Grant Loomis, Lisa Gulesserian, Julian Jimenez, Dan Schmahl, and Michael Stuart Allison) is a collective based in Galveston that creates Wake the Zine, a free DIY music and arts publication. The objective of this project is twofold. The first component is publicly accessible and free of charge: twelve issues of a monthly arts zines culminating in a year-end music + zine event. The second component is to develop and solidify the collective of volunteers through, for the first time, payment for labor and the alleviation of financial strain.

Reuben Levi’s The Green Book Project: Traveling during the Jim Crow era. During the Jim Crow Era, it was rare for African Americans to have the means to travel or to have equal rights. White Supremacists feared and sought to restrict black mobility. Although this was their fear, several African American families were moving from the farm to the big cities to take on industrial jobs creating a financial gain that helped them attain vehicles. Several cities and states would still find a way to discriminate against the Negro traveler although it was made illegal in the Civil Rights Act of 1875. Blacks had to work together to travel and vacation across the United States with the help of the historic “Negro Motorist Green Book”, a collection of motels, gas stations, restaurants, and more. The Green Book Project is a web documentary that will include photo essays and interviews across the United States about African American’s experiences.

Outspoken (Emanuelee) Bean’s Converge: The Everything with Poetry Festival is a one-day interdisciplinary art event that celebrates raw, innovative, and high-caliber artistic experience and will highlight spoken-word poetry. Converge aims to break down barriers around artistic disciplines so that new works can be created. The one-day festival will position spoken-word artists on a level playing field with local visual artists, videographers, DJ’s, musicians, and others to create new works and will showcase the work through a variety of innovative platforms. The goal of Converge is interactive impact; the festival will feature poetic photo booths, poetry slams, art installations, and speed writing buskers. By offering a wide variety of entry points, the festival will change the participant’s perception of poetry.

Hannah Bonner’s She Speaks. The past 14 months has put many local events before a global audience. Not least of these events was the in-custody death of Sandra Bland, a graduate of Prairie View A&M, as she left the gates of the campus. Since the day of that tragic event, members of The Shout have been building a bridge of support for the students of that campus. It has been impossible to ignore the power of the stories, and artistic expressions that emerge from young women and men on the campus. From theater performances to poetry to music, to the newly emerging hip-hop dance crew, the students have been processing their grief, trauma and reactions through art. Much of this art, however, has gone unseen beyond the boundaries of their town. Two performances will be held, one in Harris County and one in Prairie View, in order to amplify these students’ into an audience that they do not currently have access to influence.

Paraspace Books’ (Sara Balabanlilar and Sarah Rodriguez) Textu(r)al Response will consist of five textu(r)al response workshops/book club/intermedia think tank; four lectures, hosted by future-minded artists/thinkers; and two multi-media zines produced by Paraspace. Each workshop will take the form of a new way to approach each sense: touch, taste, sound, sight, and smell. Through these workshops, we hope to create a community conversation surrounding personal experiences in an embodiment, and what a future body could or would hope to look like or be. How do we walk through the world, and how will we, so to speak. Continuing on that theme, the four lectures we have in mind will be strongly geared toward interdisciplinary action — lead by groups such as Metropolarity, a queer sci-fi oriented press that focuses on all aspects of ‘world-building’ in an attempt to create a cohesive vision of the future. Lastly, the founders of Paraspace Books would like to create two multi-platform, digital zines that will function as an easily distributable guidebook to our philosophies as a project, as well as information and readings that are and will be valuable in the past, present, and future.

The Art Cycle (Mary Forbes and Chelby King) will offer two writing workshops for artists who need to create proposals for funding to sustain their creative practice. At each workshop, participating Houston artists will be paired one-on-one with local art historians. The workshops will be scheduled prior to the deadlines for major Houston grant applications but will not be limited to artists applying for specific grants, any writing needs the artists have will be welcomed. Approximately three to six weeks after the last workshop, an exhibition will be held of participants’ artwork.

DAMN GXRL by EQ Collective (Jessica Fuquay, Anna Garza, Miriam Hamkin, Mary Walenta, and Muna Javaid) is a quarterly zine by and for Houston-area women, queer and non-binary folks showcasing their achievements within visual art, music, activism, and other spheres in which these groups are historically marginalized and underrepresented. Intentionally broad in focus, DAMN GXRL aims to be a publication that fosters cross-pollination between different artistic and social practices.

Felipe Steinberg’s Second Death. In Houston, you can find wood utility poles rotting as they lay horizontally on sidewalks near where they were originally in use. The authorities claim that the high cost of transportation and the little landscape “damage” the poles cause, is the reason why they don’t remove them. As a form of mummification and preservation, Felipe Steinberg will treat and varnish the wood professionally of one of the lying utility poles, located at Milam Street on the right side sidewalk between Berry Street and Holman Street. This project will create a discussion on everyday life, places, conditions and situations; discuss the circulation of materials and re-signification of forms; and interact with the urban landscape as a space of reconciliation and reflection.

Uneasy Houston by Eric Pearce is about getting artworks to people the uneasy way, hand screen-printed, addressed and stamped and sent as postcards via the U.S. Mail. From the beginning, Eric Pearce will not only print his own designs but invite artist friends to participate by designing and working in the shop to screen print their postcards.

EgunStories by Felicia Johnson is an experimental narrative video project combined with a series of public “passion” plays that explore the magic of storytelling combined with the mystical continuity of the ancestors. Shot in Houston in historical locations on HD video, the pieces will feature artists, writers, and activists telling their ancestors’ stories of redemption, peace, love, and laughter. The video pieces will accompany a series of live performances in urban garden settings by the artist collective House of Ire’, which is also featured in the documentary performing a choreopoem entitled, “I Be.”

Delilah M. Montoya’s Contemporary Casta Portraiture: Nuestra “Calidad.” Following the 1825-Mexican Revolution, Mexico adopted a persona centered on mixed-race/ mestizo-identity. By embracing a collective identity of multiplicity (albeit still preferential to Spanish origins), Mexican leaders hoped to unify the populace and foster national pride. Nearly two centuries later the impact of this movement still resonates, as the majority of Mexicans and Central Americans identify as mestizo. By contrast, a 2015 a Pew Research survey found that only 6.9% of Americans identified as multiracial. This stark difference is indicative of a widely held black-and-white perspective in the United States, complicated by institutionalized racism and pervasive colonialist attitudes. It is this site of contestation, myth, and erased history where Delilah Montoya locates the series Contemporary Casta Portraiture: Nuestra “Calidad.” Her photographic portraits and accompanying DNA analysis provide insights for both sitter and viewer on the instability of identity and the means through which we are inclined to construct our own histories.

Congratulations to the winners!

#9 with David McGee: The Black Panther