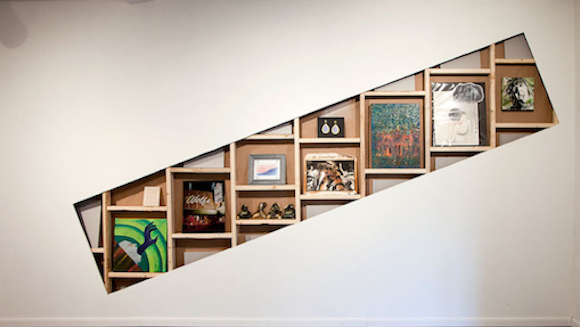 As reported by Glasstire a couple of weeks ago in “Names Familiar to Texas Will be in 2017 Whitney Biennial,” Occupy Museum’s Debtfair was included in its list because Art League Houston (ALH) hosted an exhibition of Debtfair last year. First presented in 2012, Debtfair asked financially strained artists to share their experiences and apply to have their work in the project.

According to ARTnews, the Whitney version will mimic a version installed by ALH in 2015 in which a portion of the museum’s sheetrock will be removed, and artworks by the applicants will be shown between the exposed two-by-fours. ARTnews states:

The goal for the collective will be to find ways of arranging the 30 artworks they select into three groups of ten, which they call “bundles,” in reference to the financialspeak that traders use when selling debt portfolios.

ALH has been in the forefront of the Houston art scene in the discussion and action around artists’ pay. So congratulations for influencing the next Whitney Biennial!

Another “Texan,” Robert Rauschenberg, provided some of the DNA for this kind of project when he smuggled the artworks of other artists into a Stable Gallery annual show in 1955. Works by Susan Weil and Jasper Johns were concealed in cabinets that could be opened by the viewer. Named “Short Circuit” because it circumvented the artist-selection process. Now in the Art Institute of Chicago, it can be seen here:
http://www.artic.edu/aic/collections/artwork/209926

Don … that’s an amazing tidbit of art history. My love of Robert Rauschenberg grows and grows, the more I study his work.