Live a Good, Corrupt Life with the Enron Simulator 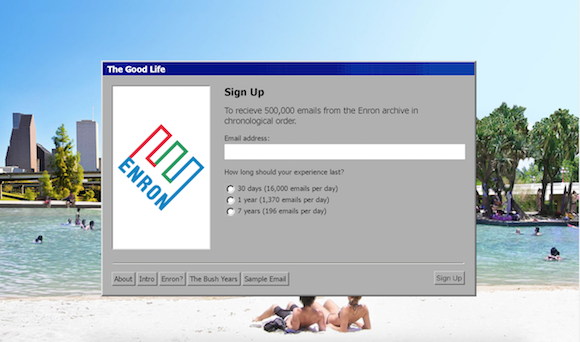 Would you like to dive deep into the cesspool of massive corporate corruption for a month, a year, seven years? You can. Through a Rhizome microgrant, artists Sam Lavigne and Tega Brain have created The Good Life (Enron Simulator)  which allows any subscriber to receive the entire trove of 500,000 emails sent between the corporate executives of the scandal-wrecked Houston-based energy company in its last years. You can receive them all in a 30-day period, or spread the pathological goodness out over years.

Via Rhizome: “The Enron email archive is a corpus… written between 158 senior executives of the Enron corporation during the last years of the company’s operation. In March of 2003, following revelations of Enron’s spectacularly corrupt business practices and subsequent demise, these emails were deemed public domain and released online by the Federal Energy Regulatory Commission (FERC).”

The artists have described it as the earliest release “of a database of this size,” and, given what was going down between a mostly male, white executive corporate criminal strata, it’s also an anthropologically and socially useful mapping tool and a “uniquely valuable linguistic resource for computer scientists who have used it to train spam filters and other natural language machine learning systems.” Now every day you can get into the headspace of corporate criminals, including, presumably, Kenneth Lay, Jeffrey Skilling and Andrew Fastow. Keep in mind that if you check the “one month” option, you’ll be getting an extra 16,000 emails a day. To sign up (it’s free), go here.

Let Paul Slocum Take You on a Tour...

Net Art is on Fire at Rhizome