This and That: Heads or Tails 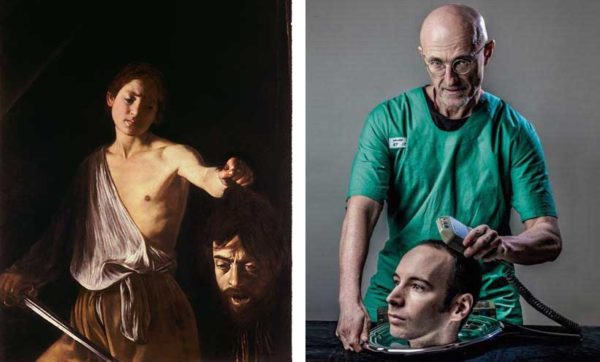 Scholars generally agree that Caravaggio’s “David with the head of Goliath” is a self portrait with Caravaggio himself gruesomely portrayed as Goliath. Some speculate that it is actually a double self-portrait with David as the young Caravaggio. Others assert that Caravaggio’s assistant and alleged lover, Cecco Boneri, is David. In 1606, Caravaggio killed a man and fled Rome to avoid capture. Caravaggio painted this work for Scipione Borghese, the papal nephew and chief administrator of papal justice. It was an attempted exchange for pardon from his bando capitale — a ‘capital sentence’ — which meant that anyone had the right to kill him with impunity for a bounty for which it was only necessary to present Caravaggio’s severed head.

Dr. Sergio Canavero, an Italian neurosurgeon, is planning the world’s first human head transplant next year (2017). He is the Director of the Turin Advanced Neuromodulation Group in Italy and author of “IMMORTAL: Why Consciousness is Not in the Brain.” (2014)

No matter how original, innovative or crazy your idea, someone else is also working on that idea. Furthermore, they are using notation very similar to yours.  – Bruce J. MacLennan