Seen/Not Seen, the semi-titular artwork in Jim Malone’s solo exhibition at Artspace111 (Scene/Not Scene), in Forth Worth, has the following verse from 2 Corinthians 4:18 embossed on the paper:

While we look not at the things

Which are seen but at the things

Which are not seen: for the things

Which are seen are temporal; but

The things which are not seen

The foundational images that are at the heart of Malone’s work—the eroded rock formations of the Chisos Mountains in Big Bend National Park, the ever-blooming cacti, the tiny sparrow and the transcendent night sky—all carry a sense of the eternal forces that made them. Malone acknowledges that the recurring imagery in his work functions as symbols and metaphors with many meanings, but “mostly experiences and memories of emotions [from] being there.” A pervasive image of a man rafting down a river could represent the artist himself or a metaphor for his memory. 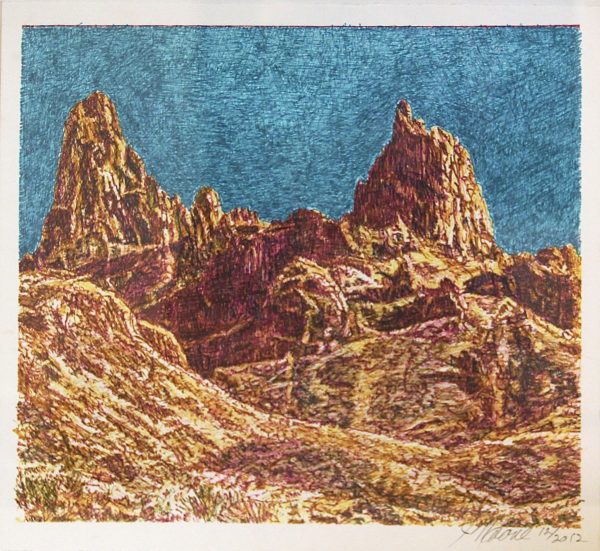 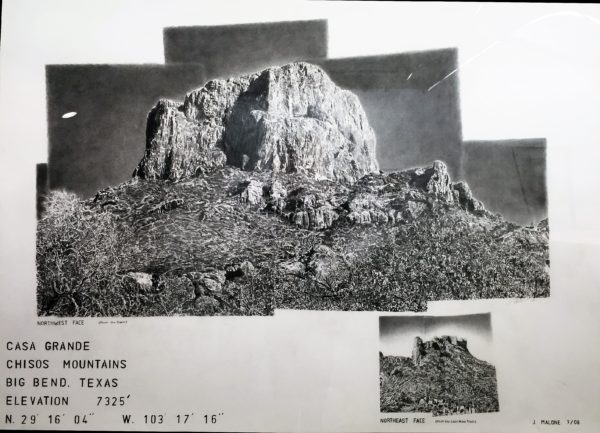 Landscape (Mule Ears) is one of Malone’s seminal images, presented singly and drawn with colored markers; the burnt-orange color of the rocks contrasts sharply with the turquoise blue sky. In this work and the other 25 works in the exhibition, Malone employs a signature drawing technique that is agitated and restless, and ties his motifs together in a common vocabulary. Reinforcing the continuity of his drawing technique is the dominating image of Casa Grande, a 44 x 60-inch pencil drawing dating from 2008 that is the earliest work in the show. It contains two drawings of this familiar monument in the Chisos Mountain range. The largest is of the northwest face of the monument viewed from the basin, spliced together with a pendant drawing of the northeast face as seen from the Lost Mine Trail. From a distance, the drawing looks almost photographic, but closer inspection reveals Malone’s uniquely scribbled, agitated lines that delineate carefully observed forms sculpted by erosion, light and shadow. 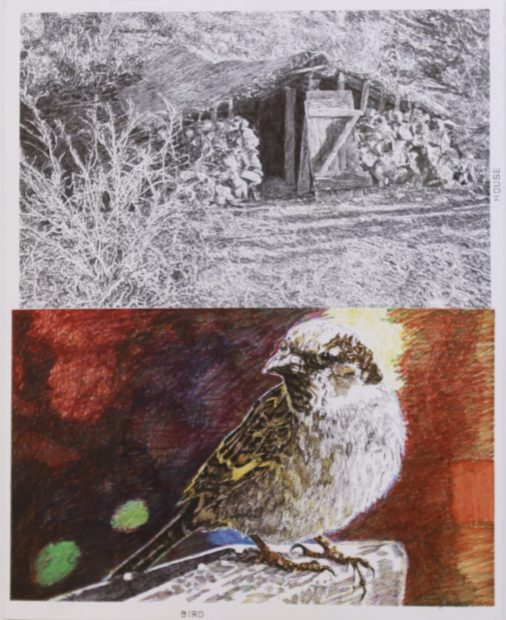 The simplicity of dual motif images such as Bird Mountain and Bird House are contrasted in this show with more complex works like Seen/Not Seen with its vertical format of six vignettes, and Thanks for Being Me, with its collaged and painted elements. In Bird House, the drawing splices an image of a brown bird set against a warm red background together with a beautifully rendered image drawn in thin black marker strokes of a weather-beaten hut called Luna’s Jacal, in Big Bend. This house—belonging to Gilberto Luna, a Mexican pioneer farmer—appears in several works, including the three-dimensional Palace of the Moon. Thanks for Being Me is a mixed-media work and features irregular cut-out colored drawings that are collaged along the bottom of a larger drawing of the Chisos. Malone used machine stitching to collage the drawings in place. He says he has used stitching in his art for years, beginning as a kid when his mother taught him to sew and he made holsters for his toy guns. 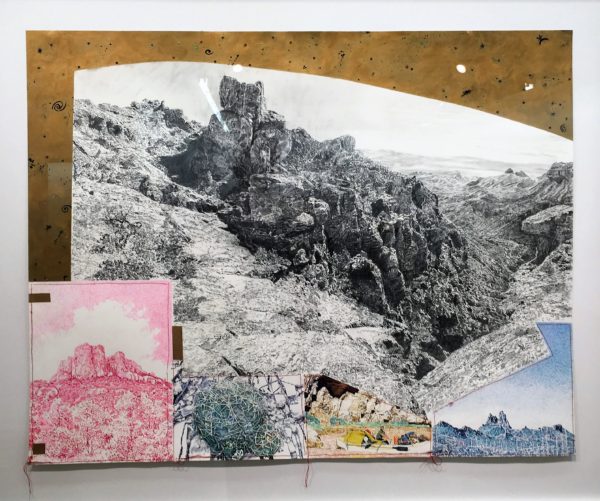 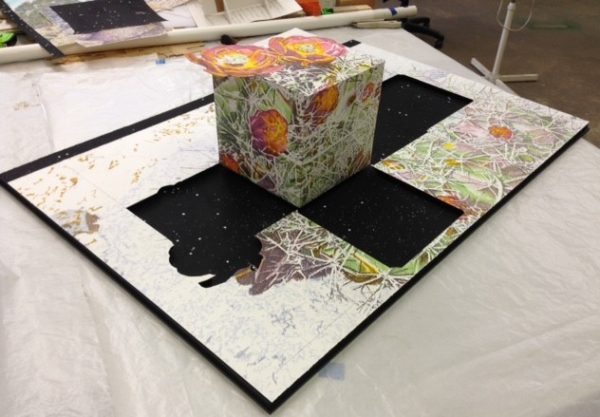 Notable in this show are three constructions; these are made from his drawings that are transformed into three-dimensional works. Cactus Garden is created from a colored print of a blooming cactus that is glued to foam core; then squared-off sides of box forms are cut out, creased and folded inward to form the final box. In the voids created where the foam core has been pulled up, black paper backing is revealed, dusted with silver stars, as if you can see the pitch black night sky. 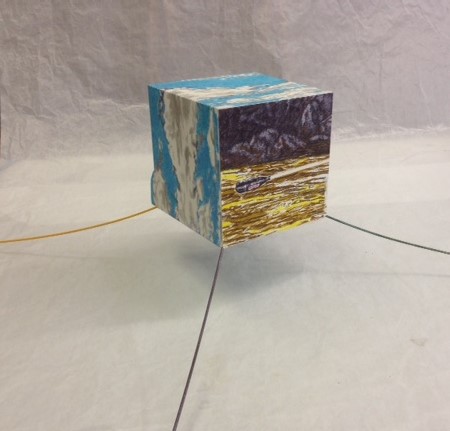 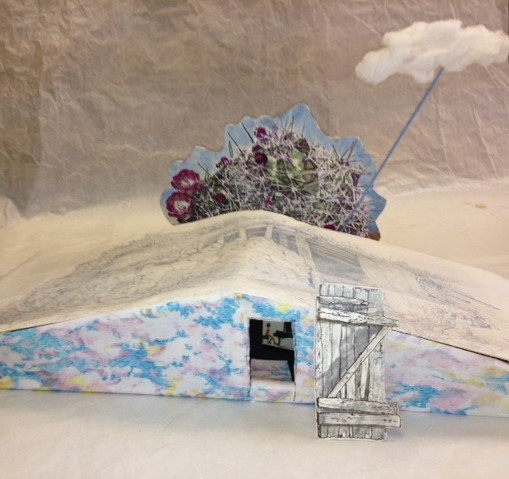 G.P.S. is another paper box construction; this one features on three sides a lone man rafting a river, with the other three sides showing the sky. The box is elevated on very thin colored wooden dowel sticks. Palace of the Moon is constructed of a wooden framed dwelling covered in paper drawings. The low-pitched roof is covered by a delicate elevation drawing of the hut, while the sides are covered by drawings of clouds, and its over-scaled door stands open. As a backdrop, a peeled stick holds up an enlarged cactus drawing and, humorously, another stick supports a wad of cotton representing a cloud. 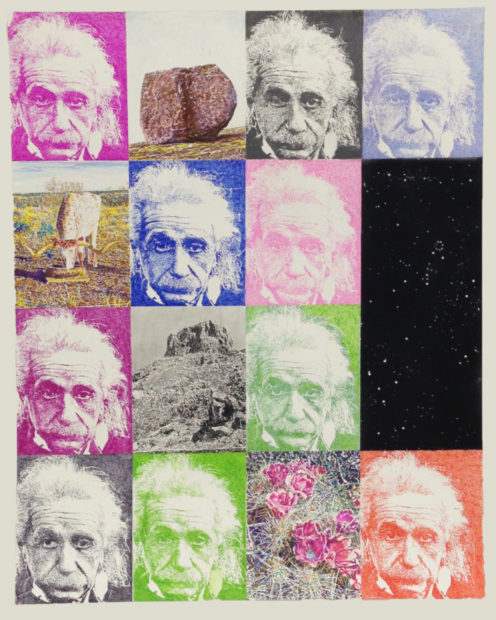 Philip Glass composed Einstein on the Beach, and so Malone put Einstein on the Ranch. Malone describes his view of Einstein as a ‘real maverick’ who rode ‘roughshod’ over the laws of physics. For this work, Malone wanted to use a recurring image of Einstein (originally a photograph by Philippe Halsman) to feel the “sameness and differences that occur [when] repeating an image by hand,” and each Einstein image in 10 of the 16 squared drawings is rendered in a different color of marker pen, ranging from light pink to orange, red, blue and green.  However, after the novelty of Einstein waned, he started including a few of his more familiar Texas images of a longhorn steer, an eroded rock and a black sky sprinkled with stars. There is a visual connection between the frizzy-haired genius and Malone’s scratchy rendering of cactus and sagebrush. 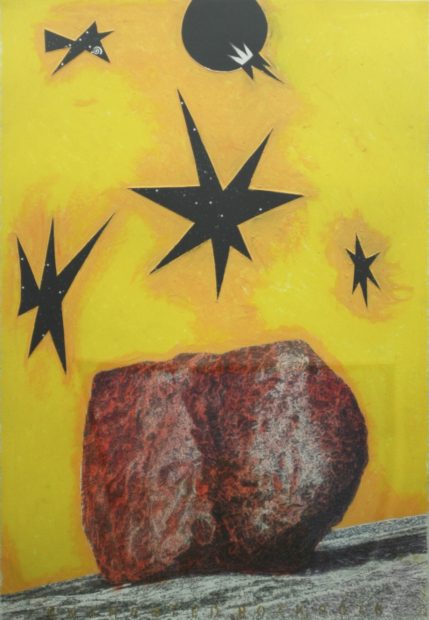 The consistency of Malone’s draftmanship holds up to even jazzier reiterations, such as Enchanted Rock Rock, that throws in Matissian cut-out star shapes as a foil to the meticulously drawn rock form. Like a montage of ‘scenes’ that Malone has seen and recorded, his works attest to the persistence of memory.

A Walk Through the Love Texas Art Studios...